Although best known as a composer, Borodin first trained as a medical doctor and then became an eminent chemist, describing himself as a Sunday composer only: ‘Science is my work and music is my fun’.

﻿Alexander Porfiryevich Borodin was born in November 1833 in St Petersburg, Russia, son of 62-year-old Georgian nobleman Prince Luka Stepanovitch Gedianishvili and his 25-year-old servant Avdot’ya Konsantinova Anonova. The nobleman had Alexander registered as the son of one of his valets, Porfiry Borodin, and the valet’s wife, Tatiana, hence Borodin’s Russian name.

The young Borodin was integrated into the royal house’s servant staff and classed as a serf, according to the social structure of the time. He called his biological mother ‘Auntie Tetushka’ and it is not clear whether he knew who she really was. The double whammy of illegitimacy and serfdom did not provide the precocious Borodin many opportunities, but this was overcome by his ‘auntie’, who rallied tutors from both inside and outside of the household to provide tutelage on a wide variety of subjects. He learned to play the flute, cello and piano and studied several foreign languages – French, German and English. At age six, he was freed from serfdom after his mother married in 1839. He started writing music when he was nine and built a home laboratory to produce fireworks when he was 13.

Avdot’ya Anonova tried unsuccessfully to enrol Borodin at St Petersburg University when he was 17 but pulled a few strings to get him enrolled at the Medico-Surgical Academy in the same city in 1850. He graduated in 1856 ‘with exceptional distinction’. Although qualifying as a doctor and surgeon and becoming a house surgeon at the second military hospital from 1856 to 1859, Borodin became interested in chemistry under the influence of Professor Nikolai Zinin, who was the first to synthesise aniline, the basis of the synthetic dye industry.

Borodin received a doctorate of medicine in 1858 for his thesis ‘On the analogy of arsenic and phosphoric acids in chemical and toxicological behaviour’ but then abandoned his medical career in 1859 to concentrate on chemistry and music.

Subsequently, funded by the Medico-Surgical Academy, Borodin travelled extensively and lived in Western Europe, working in the laboratories of Bunsen and Erlenmeyer in Heidelberg with other Russian and German scientists. Dimitri Mendeleev was also there, being a dominant member of the so-called Heidelberg Circle of chemists, the members of which would discuss their research and the world in general, including the formation of a Russian Chemical Society. Borodin and Mendeleev seem to have hit it off immediately, spending much time together, including dining together most evenings. Writing to his mother, Borodin told her of his new friendship and how he had visited Mendeleev’s laboratory, which he had established in his (Mendeleev’s) apartment (see November/December 2019 issue, p. 16).

They both travelled to the Karlsruhe Congress in 1860, a critical event in the history of chemistry, where Borodin was particularly inspired by the many brilliant lectures given and ideas presented. After the Congress, Borodin and Mendeleev returned to Heidelberg, during which they no doubt richly discussed all that had transpired at the Congress. This period included journeys with Mendeleev to Italy (see box p. 25), Switzerland and France, attending a Papal mass in Rome, visiting Pasteur (among others) and lecturing in Paris.

Borodin proposed to Russian pianist Katerina S. Protopopova in 1861, and they married in 1863. Because of her poor health, they relocated to Pisa for some time, and while in Pisa Borodin worked on fluorine compounds with Sebastian de Luca and Paola Tessinari.

In 1862, Borodin returned to St Petersburg Medico-Surgical Academy and, in 1864, replaced Zinin as Professor of Chemistry. Borodin lived in the grounds of the Academy for the rest of his life with Katerina, their two adopted daughters, a number of cats and itinerant family members. He continued to travel around Europe, representing the Academy at important international meetings and conferences.

Among his other achievements, Borodin, together with Sergey Botkin, Ivan Sechenov and other professors, founded the first medical course for women in Russia, commencing with obstetrics, in 1872. He completely redesigned the archaic chemistry courses and included more equipment and demonstrations, wooing a greater number of students to them. During the period of Mendeleev’s time teaching, the abolition of serfdom brought greater social freedoms, with Borodin particularly championing the education of women, notwithstanding the discomfort of the Czarist government.

Borodin became the Director of the Medico-Surgical Academy Laboratories in 1874 and was the chair of the Governing Board of St Petersburg Music Lovers from 1879 to 1880.

In February 1887, aged only 53, Borodin collapsed suddenly and died from a heart attack at a fancy-dress party in the Academy. After his untimely death, a group of female doctors he had trained placed a silver wreath on his grave, thanking him on behalf of 10 graduations of women.

Borodin’s contributions to chemistry were substantial. From 1858 to 1886, he authored or co-authored some 40 papers of extraordinary diversity. His first paper was: ‘On the action of ethyl iodide on hydrobenzamide and amarine and the constitution of these compounds’.

Illustrating both the range and depth of Borodin’s chemistry interests and expertise, the table below contains just a few examples of his work. In most cases, Borodin

co-authored the publication with one or more collaborators.

A colleague* has suggested that the most significant papers produced by Borodin include those on the preparation of benzoyl fluoride (during his stay in Pisa in 1862), the polymerisation and condensation of aldehydes (in St Petersburg in the period 1864–1873) and the determination of urea in urine, also in St Petersburg from 1875 onwards.

Borodin first observed silver salts of carboxylic acids reacting with a halogen to produce an organic halide (now called the Hunsdiecker–Borodin reaction) in the early 1860s.

Borodin’s early work in St Petersburg involved elucidating the mechanisms of several organic reactions, but also included work on the analysis of mineral water found in springs at the health resort of Soligalich, well known for its therapeutic properties.

In Pisa, Borodin collaborated with de Luca and Tessinari, producing several papers on the production of benzoyl fluoride and similar compounds. Back in St Petersburg, much of Borodin’s work was on the polymerisation and condensation of aldehydes. He ruffled the feathers of prominent German organic chemist August Kekulé during this period because Kekulé regarded work on aldehydes as his own territory and resented others intruding on his patch.

Borodin’s work on the development of analytical techniques for the determination of urea was extremely important at the time because it involved the production of nitrogen gas, which enabled very low concentrations of urea to be determined.

Other studies included work on disinfectants (which would have been particularly relevant to the operation of the Medico-Surgical Academy where Borodin worked and lived) and analyses to determine the composition of types and grades of tea compressed into bricks, quite popular in various parts of Asia at the time.

In February 1871, work was reported on studies performed under Borodin’s guidance by assistant Dr Krylov. They expected analysis of the fat in heart muscles affected by fatty degeneration to yield glycerol. Instead, they found cholesterol, first reported 1789 but the structure not verified until 1932. (The importance of this discovery was not realised until the 1910s, when German chemist Adolf Windaus noted cholesterol in the atherosclerotic plaques of human aortas.)

Borodin’s musical output was minuscule compared with other composers of note, yet his legacy is firmly established. Some works, such as his masterpiece opera Prince Igor and third symphony, were completed by other composers. Borodin’s major works include:

Borodin organised to blend his scientific and musical travels, trying to ensure that science and musical meetings and events coincided at the same dates and locations. For example, while in Germany he met Franz Liszt in Weimar, where together they played piano duets of Borodin’s music.

A number of Borodin’s major works are readily available on recordings and YouTube clips. A recommended introduction would be to listen to the Polovtsian Dances from the opera Prince Igor about 10 minutes duration. Further recommended are the second symphony, tone poem In the Steppes of Central Asia and the second string quartet.

To hear some of Borodin’s best tunes given Broadway interpretation, listen to a recording of the musical Kismet, which was produced with acclaim on Broadway and the West End of London in the mid-1950s.

* Our sincere thanks to Professor Ian Rae for providing his published papers on Borodin and for his ongoing advice on the life, chemistry and times of Borodin.﻿

David Edmonds FRACI CChem is a past President of the RACI. Now retired, he worked in various technical roles in the therapeutic goods industry and is passionate about live and recorded classical music. Alf Larcher FRACI CChem is a petroleum, environmental and industrial chemist with an occasional urge to write science articles. Richard Thwaites FRACI CChem retired from full-time employment in the chemical industry in 2008. He is a former RACI Victorian Branch President and Qualifications & Accreditation Committee Chair. He is a member of the Chemistry in Australia Management Committee.  His interest in Borodin started at a music camp, in his youth, when he played the cello part in a performance of the overture to Prince Igor.

In October 1860, Borodin decided to go to Italy with Mendeleev, travelling to Venice, Verona and Milan. The two seemed to want to get away from the formalities and stuffiness of Heidelberg and the very recent Karlsruhe Conference, and let their hair down, with them ‘dressing like artists’ to blend into the Italian population. The plan worked a little too well, as near Verona their train was searched by Austrian police for an escaped Italian political prisoner (since at the time Austria controlled much of northern Italy and a resistance movement was well under way). The actual escaped prisoner was on the train, but the police mistook Borodin, because of his Italian ‘countenance’ for the fugitive. Borodin and Mendeleev were searched, questioned and nearly arrested before convincing the police that they were two harmless Russian chemists. When they finally crossed the border into Italy, everyone in the rail car embraced and kissed them, shouting ‘Viva’, the reason being that the political fugitive was sitting in the same rail car all the time, with the police not noticing him. Borodin and Mendeleev seemed to have enjoyed their new fame and the rest of their stay in Italy.

The careers of both men progressed, with them both attaining academic positions in St Petersburg. Both were influenced and inculcated by Professor Voskresenskii of St Petersburg University on the importance of teaching, which Borodin put into practice when working in the Medico-Surgical Academy. Mendeleev always spoke highly of his friend, once stating that when travelling internationally people would often ask ‘What has your Borodin done that is new?’ 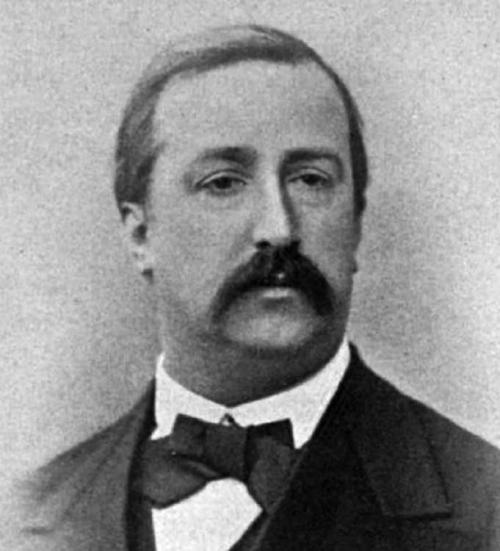 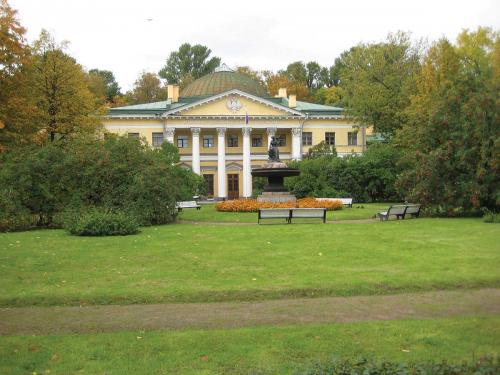 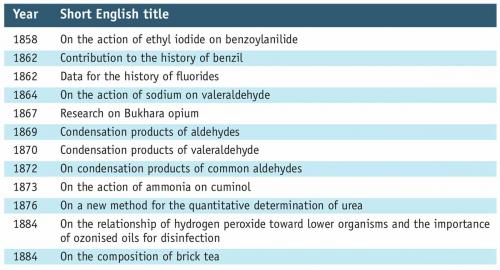 From George B. Kauffman’s ‘Complete list of Borodin’s chemical and musical works’ (bit.ly/3iek017). The source of each publication can be found here.

Some of Borodin’s contributions to the chemistry literature

Borodin and Mendeleev seem to have hit it off immediately, spending much time together, including dining together most evenings.