In the past few years, there has been an increasing interest in the production of rare earths in Australia, where the US Geological Survey estimates reserves at 3.4 Mt. China is the world’s primary source of rare earths, producing 120 kt/year out of a world total of 170 kt/year, and with 44 Mt reserves. Rare earths are now seen by the US as strategic materials.

Rare earths are not all that rare. They are more common than precious metals and as common as some of the commodity metals, such as lead. The problem is that separation into the individual elements is somewhat arduous.

The term ‘rare earth’ covers not only the lanthanides (f-block elements) but also scandium and yttrium, which are found along with the lanthanides. A major source of rare earths is monazite sand, which is found on many beaches in Brazil and India. Monazite is particularly rich in cerium. The typical composition of monazite sand is as follows and can be considered a rare earth, thorium phosphate:

Another significant source is carbonatites such as bastnasite, which have a high lanthanum content. The rare earths are formed from fission of uranium and thorium so that the ores contain these parent elements and hence come under regulations designed for the nuclear industry. A typical bastnasite composition is:

For the major uses of rare earths – catalysts (60%) and ceramics (15%) – it is often not necessary to separate the individual rare earths, and there are several methods for separating the rare earth elements from unwanted minerals. Lanthanum and cerium are mostly the elements of interest. The fact that cerium has two stable oxidation states (III and IV) assists in its separation. One of the main uses is in cracking catalysts in which zeolite-Y (faujasite) is ion exchanged with rare earth elements (preferably with a high lanthanum or cerium content). The resulting catalyst rare earth-Y has higher Brønsted acidity than the normal hydrogen zeolite. Rare earth exchange into the zeolite also has the effect of increasing the stability of the zeolite in the presence of steam. This facilitates separating the hydrocarbon-cracked products from the zeolite, using steam. Most refineries use the fluid cat-cracking process for producing gasoline from heavier hydrocarbons, so the world demand for rare earths for this is large. Cerium is in high demand as a catalyst promoter for vehicle catalytic converters where the cerium increases the activity of the platinum group metals (Pt, Pd) for oxidation of unburnt hydrocarbons in the vehicle exhaust.

The problems come when individual elements in the lanthanide series are required. Europium was used as a phosphor for early (cathode ray) colour TVs. Fortunately, europium has two oxidation states (II and III), which can be used to extract europium from the mix. Today there is increased interest in other individual elements; for example, neodymium and samarium for powerful magnets and other rare earths for electronic components. The other elements have only one stable oxidation state (III) so separation of the individual elements is somewhat laborious.

In the early days, the elements were separaed by exhaustive fractional crystallisation, which has been used to separate and characterise the elements. The main process for separation is by liquid–liquid extraction in which an aqueous solution of mixed rare earth elements (usually as nitrates) is contacted with a hydrocarbon stream containing a ligand, which selectively extracts the rare earths. Several different ligands can be used but dialkyl phosphinic acids are a common type. This results in an organic stream richer in one element over another. A cascade of separators can be used to separate individual elements.

Early work on the separation process was conducted at the Argonne National Laboratory in the US and the process was developed by workers at Rhone-Poulenc. The Rhone-Poulenc process for separating the more commercially important elements from monazite sand illustrates the complexity of the problem (see diagram above).

There have been several attempts to establish a rare earth separation industry in Australia. As may be judged from the diagram, the separation process is energy intensive. The prevailing high cost of energy in Australia (especially on the east coast) presents a major hurdle.

Unfortunately, the main problem centres on the radioactive nature of the starting materials and the products. Most of the rare earths have radioactive isotopes. Apart from promethium, the rare earths have very long half-lives (more than 107 years). All the isotopes of promethium are unstable (less than 17 days) and this element is not found in nature. There is a significant issue with thorium and uranium found in the ores but as unwanted materials. Because of their use in the nuclear industry, production of uranium and thorium is highly controlled and regulated. The antipathy of Australia’s politics to the nuclear industry has stymied many proposals.

The current development by Lynas Corporation relies on exporting relatively benign carbonatite concentrate to Malaysia and performing the upgrading (value adding) there. Another potential source is at the BHP Olympic Dam operation but as yet the separation of rare earths has not proved economically feasible. 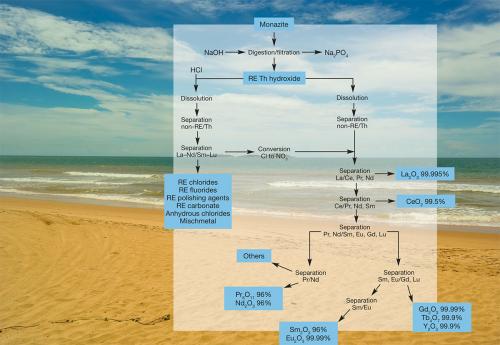 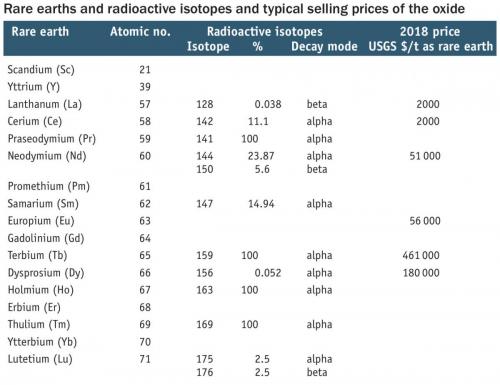