Chemistry and the pandemic

Australians spending long periods at home during last year’s on-again, off-again restrictions on public and private life found many ways to fill in their time and stave off boredom. Vegetable gardens flourished, sales of dogs and bicycles boomed, home cooking was encouraged, and the mysteries of sourdough were explored in many a house. There was a lot of DIY chemistry, but the words ‘chemistry’ and ‘chemical’ were not often used by advocates of wellness or sustainability. There was a re-emergence of traditional formulations from grandma’s day that included stain removers, cosmetics and garden sprays, and a few new angles on well-being.

Among the ‘natural’ remedies for almost everything are plant oils, and one that caught my eye (but not my credit card) was bay leaf oil. It’s probably the oil of the common bay laurel that we use in cooking, Laurus nobilis, but some products use the oil of the West Indian bay, Pimenta racemose. The oils are similar: 40–50% eucalyptol (cineole) accompanied by a range of other terpenes. It’s the West Indian oil that was used in Bay Rum aftershave, something I haven’t seen on the shelves for a long time. It really did contain rum, which functioned to extract the oil from the bay leaves during preparation of the mixture. The rum can be replaced by aqueous alcohol or even another spirituous liquor such as vodka, but the real thing always used West Indian rum. Thinking of aftershaves and male deodorants, I wondered whether there had been a dramatic drop in sales last year when working from home replaced the daily commute, hours of the mingling in the office, and stopping off for a few drinks on the way home.

The shelves of alternative medicines (although they are never called that) in the pharmacy feature a range of magic minerals, too. Looking for a historical example, I dug into my files and retrieved information about a product from the 1930s called ‘Bathoids’. Bathoid tablets added to the bathwater were said to ‘open the pores of the skin, and dissolve and extract the surplus fat which accumulates in the epidermis’ or, to put it another way, ‘promotes free and active perspiration whilst you are actually in your bath, which has the three-fold benefit of reducing your weight, generally toning the system, and cleansing the skin of all impurities and making it smooth and velvety’. ‘The days of dieting, tiring exercise and internal drugs are passed’, read another advertisement. Satisfied customers gave testimony that a pound, or even two or three pounds, of unsightly fat could be lost in a single bath. One actress wrote to say that during eight baths she lost nine pounds, and as you can guess from this the customers being targeted were women. Surely there were markets among jockeys and boxers who were striving to meet weight limits?

The magic ingredient in Bathoids was magnesium sulfate (Epsom salts). Critics, possibly competitors who feared their livelihood being stolen, claimed benefits had nothing to do with the solute but could instead be ascribed to sweating in a hot bath. If only it were that easy! Looking through the press of the day, I didn’t find any warnings that the bather would need to be careful not to ingest any of the bathwater lest there be an unexpected loss of weight caused by this well-known laxative.

Coming closer to the present, the vulgar emphasis on weight reduction seems to have given way to the more subtly expressed benefit of feeling well and getting ‘the best sleep I ever had’. Some advocates claim relief from arthritis, allergies and eczema, as well as the lowering of blood pressure. All this can happen in a ‘halotherapy’ suite – a room lined with blocks of salt, sometimes having a salt bed where the wellness-seeker can recline. To get the customer closer to the salt, a ‘halogenerator’ in the suite grinds common salt into a dry aerosol and disperses it ‘to mimic the atmosphere of a salt cave’. This is a reference to the supposed benefits gained by Europeans who descended into historic salt caves. I have been in such a salt cave, albeit an artificial one in Cheshire where the British alkali industry began. I won’t go into the chemistry but just remind readers that the Na of NaCl winds up in NaOH. As a boots-on-the ground (in this case, under-the-ground) historian of chemistry, I felt pretty good after my visit but I don’t think the salt dust in the air was the reason. I did bring back the sample of the salt pictured here and I can make some of it available to anyone with a halogenerator who’d like to try it out. 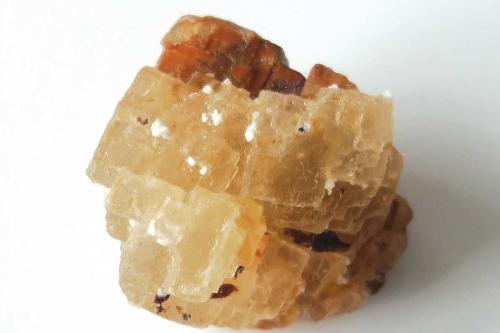