An important advancement in human evolution studies has been achieved after scientists retrieved the oldest human genetic data set from an 800 000-year-old tooth belonging to the hominin species Homo antecessor.

The findings by scientists from the University of Copenhagen (Denmark), National Research Center on Human Evolution (Burgos, Spain), and other institutions, were published in Nature (https://doi.org/10.1038/s41586-020-2153-8).

The researchers used mass spectrometry to sequence ancient proteins from dental enamel, and confidently determined the position of Homo antecessor in the human family tree.

The new molecular method, palaeoproteomics, developed by researchers at the University of Copenhagen, enables scientists to retrieve molecular evidence to accurately reconstruct human evolution from further back in time than ever before.

The human and the chimpanzee lineages split from each other between nine and seven million years ago. Scientists have relentlessly aimed to better understand the evolutionary relations between our species and the others, all now extinct, in the human lineage.

‘Much of what we know so far is based either on the results of ancient DNA analysis, or on observations of the shape and the physical structure of fossils. Because of the chemical degradation of DNA over time, the oldest human DNA retrieved so far is dated at no more than approximately 400 000 years’, said lead author Enrico Cappellini (University of Copenhagen).

The fossils analysed by the researchers were found by palaeoanthropologist José María Bermúdez de Castro and his team in 1994 in stratigraphic level TD6 from the Gran Dolina cave site, one of the archaeological and paleontological sites of the Sierra de Atapuerca, Spain.

Initial observations led to the conclusion that Homo antecessor was the last common ancestor to modern humans and Neanderthals, a conclusion based on the physical shape and appearance of the fossils. In the following years, the exact relationship between Homo antecessor and other human groups, like ourselves and Neanderthals, has been discussed intensely among anthropologists.

Although the hypothesis that Homo antecessor could be the common ancestor of Neanderthals and modern humans is very difficult to fit into the evolutionary scenario of the genus Homo, new findings in TD6 and subsequent studies revealed several characters shared among the human species found in Atapuerca and the Neanderthals. In addition, new studies confirmed that the facial features of Homo antecessor are very similar to those of Homo sapiens and very different from those of the Neanderthals and their more recent ancestors. 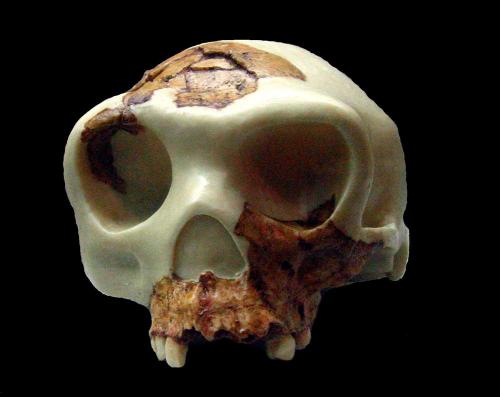 ... palaeoproteomics ... enables scientists to retrieve molecular evidence to accurately reconstruct human evolution from further back in time than ever before.