My paternal grandmother gave me a chemistry set as a Christmas present. It was a Russex Chemistry Outfit, and my research has revealed that it was assembled by Edward Russell Rotherham, the proprietor of Russell Laboratories in the southeastern suburbs of Melbourne. I was still in primary school, and since I have found an advertisement for the set in the Melbourne Argus for November 1947, I reckon that must have been the year. I was just ten years old.

According to the advertisement, the set contained six ‘testing’ tubes, a cleaning brush, six sample jars of chemicals and a book of instructions. Maybe my set was an improved version because I think it had more than six chemicals. I remember copper sulfate, nickel sulfate, ferric ammonium sulfate, cobalt chloride, sulfur, sodium bisulfate (a stand-in for sulfuric acid), ammonium chloride and sodium silicate solution. There was litmus paper, too. To refresh my memory I consulted the copy of the Russex instruction book in the State Library of Victoria and saw that it recommended augmenting the array of chemical substances with ones that were found around the home. These included lime, Condy’s crystals (potassium permanganate) and Epsom salts (magnesium sulfate). There were instructions for making a burner from a glass jar: I used a Vegemite jar, one of the old white ones with a metal lid. I cut a hole in the lid, as instructed, inserted a piece of rope to act as a wick, and half-filled the jar with methylated spirits. It worked well for heating liquids in the test tubes, which I held with a strip of light cardboard, as recommended.

The prescribed experiments were a lot of fun, and much simpler than the ones described in a chemistry textbook that I had inherited from a relative. I observed the loss of ‘water of crystallisation’, made lime-sulfur solution and used it to stain a silver coin, prepared iron sulfide by heating sulfur and iron filings (home-made!) in an old spoon, and used that to generate rotten egg gas. I detected carbon dioxide in my breath by blowing into lime water, and I sublimed ammonium chloride.

There was nothing really dangerous in the kit, but there were instructions to make sodium hydroxide from sodium carbonate and lime. Buying quicklime (calcium oxide) may have been more difficult than buying caustic soda that was (and is) commonly available as a drain cleaner. However, generating small quantities makes a lot of sense for young chemists, and from my sodium hydroxide I was able to make the jelly-like hydroxides of nickel, magnesium and iron. Calcium oxide was also used to generate ammonia from ammonium chloride; nitric acid was made from sodium bisulfate and potassium nitrate. Finally, there was a chemical garden with sodium silicate and three of my metal salts.

Russell Laboratories didn’t make much of an impact on Melbourne’s commercial scene, but I found quite a bit of information about Rotherham – always known as Ted – who was a skilled amateur photographer who won prizes for his work. He was President of the Melbourne Camera Club in 1958, and one of his nature photographs was published in the history of the club, written by Alan Elliott. The club has an E.R. Rotherham Trophy for Nature as part of its annual competition.

Rotherham (1923–2009) was registered as a secondary teacher in 1948 and served as a teacher in northern Victoria (I wonder if he may have been a chemistry teacher) before making a career out of his hobby, teaching photography at RMIT.  He retired in 1983. Rotherham was known as an illustrator, in which capacity he was co-author of a number of books about plants and gardens (with a sideline in pictures of snakes). He was a member of the Field Naturalists Club and the Society for Growing Australian Plants. He was also interested in the local history of Warrandyte, where he lived, and this was recognised by an award from the Royal Historical Society of Victoria in 1998.

When I began writing this Letter, I headed it ‘my first chemistry set’, but as the writing went along, I realised that it had been my only chemistry set. Even as I worked with the Russex chemicals, I was getting supplies from a local pharmacy, and then from chemical suppliers Selby and Keogh in the city. I was also gifted the chemicals and glassware from another home chemistry enthusiast when he found enough to keep him busy at work, as an industrial chemist. 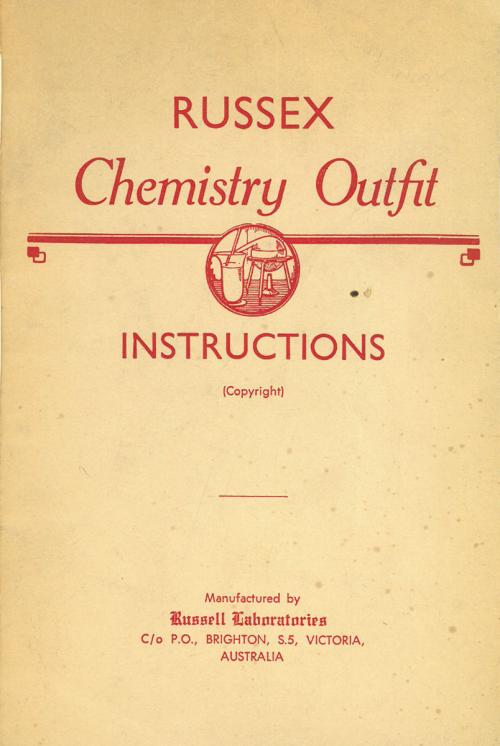 There were instructions for making a burner from a glass jar: I used a Vegemite jar, one of the old white ones with a metal lid.