A whiff of chemical harmony

﻿‘A strong background in chemistry works miracles’, according to chemist turned perfumer Christophe Laudamiel. ‘The mystery and myriad of scents found in perfumes actually have very rational explanations based on concepts such as volatilities, Van der Waals interactions, hydrogen bonds, and chemical reactions between alcohols, aldehydes, and amines’, he explained when describing his career (bit.ly/312SOst).

Harmonious chords of the musical kind are observed to have vibration frequencies (pitches) that are proportional to simple ratios. For example, a triad is three notes, with intervals of a third between each, played or sung together. If there are large differences in frequencies, the ear separates them and harmony is considered lost, at least in traditional Western music. The chords are integrated into octaves for a complete musical effect.

The top note of a perfume’s fragrance ‘chord’ is a very volatile group (vapour pressure 187–18 Pa, such as citrus). A second (13–2.7 Pa, such as jasmine) and third group (2.7–0.11 Pa, such as sandalwood) are the middle and bottom notes of the chord. They are all released and smelled sequentially.

In a basic distillation, the starting material can be heated to boiling in water rather than passing steam through it. It can then be extracted overnight in alcohol and strained to make a more concentrated starting point for steam distillation.

A good and readily available raw material is eucalyptus leaves. There are a large number of eucalyptus species, each with its unique fingerprint of chemicals in their leaves. The composition of each eucalypt type determines its usefulness for medicinal, industrial or perfumery purposes. Australia has an important and rich history of eucalypt distillation (bit.ly/3cXApl6 and bit.ly/35cXdL4).

Most leaves, barks, fruit (peel) and the like are also good raw materials for distillation. Herbs such as rosemary, thyme and oregano work well. Most flowers do not. They are usually too delicate and the oil yields are very low and smell strange. The exceptions are lavender and roses. ‘Stinking Roger’ (Tagetes family, a weed) has a lot of oil in the leaves. Distillation times are usually reasonably short (due to modest boiling points).

So, what does the physical chemistry mentioned by Laudamiel boil down to?

The exponential relationship between vapour pressure and temperature, described by the Clausius–Clapeyron equation, is important for perfume sales in different seasons and for different climates, and formulations differ accordingly.

The distillate products from leaves can be moderately toxic when ingested (e.g. eucalyptus and tea tree oils), and are labelled ‘poison’ in commercial products. In practice, toxicity depends on the dose. This toxicity can come from the secondary metabolites in the plant that it uses to protect itself from insect attack and microbial disease. The koala is unique in being able to deal with the eucalypt leaf, its sole food (see Sept/Oct 2019 issue, p. 16).

And then there are those who assign magical protective and healing properties to such ‘natural’ products. Despite the claims, there is no evidence that eucalyptus essential oil vapour is a remedy for COVID-19 (bit.ly/2W2pqjG).

Ben Selinger FRACI CChem is is Emeritus Professor of Chemistry at ANU. He appreciates the help now and in the past from John Lambeth, specialist fragrance designer extraordinaire.

A friend told me he once designed a ‘fragrance’ for an enquiry from Asia that involved the idea of masking humans (mercenaries) in jungle combat situations by having them sprayed with a ‘jungle smell’. I interpreted this to mean earthy geosmin-like notes, mushroom, woody (patchouli) notes and green foliage/vegetable notes. The project came to nothing. This ‘fragrance’ was subsequently purchased in very large quantities for use to improve the smell of processed and aged chicken-manure-based fertiliser. Unfortunately a much higher dosage was required than the manufacturers could afford in order to mask or noticeably improve the diabolical smell of raw fertiliser 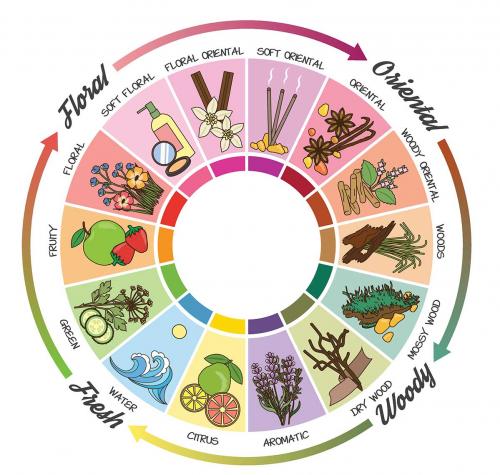 The fragrance wheel, based on a classification system developed by fragrance expert Michael Edwards. iStockphoto/MedejaJa

Equipment for steam distillation. Modified from Selinger B., Barrow R. (2017) Chemistry in the marketplace. Reused with permission from CSIRO Publishing.

Many essential oils decompose before reaching their boiling points and this explains the advantage of steam distillation.