White wines as well as some sparkling wines and rosé wines commonly have residual protein. This residual protein can lead to problems in the bottle, if the wine is not stored properly, as it can be readily denatured and lead to the formation of a brown haze. For example, if a wine is left in the car on a warm day, the internal temperature can rise to 45°C, leading to protein denaturing. The resulting brown haze is regarded by consumers as a quality defect, which affects acceptance of the wine and it may take time for the wine brand to regain consumer confidence. So it is common practice to treat the wine in advance, to stabilise it against protein haze formation.

Treatment with bentonite is perhaps the most common winemaking practice to achieve protein stability. Bentonite is an alumina-silicate for which the active component is montmorillonite. In essence, the alumina-silicate lattice has an overall negative charge with either sodium or calcium ions occupying the inter-lattice space. Both the sodium and calcium forms are used and both have their supporters and detractors. Protein removal occurs by ion exchange. Fortunately, the iso-electric point of most proteins in wine is such that they possess a positive charge at wine pH. Thus, the positively charged protein replaces the sodium or calcium cation and after mixing and settling, the bentonite-protein fluffy solid can be removed.

There are several difficulties and frustrations with the use of bentonite. First, from my own practical experience in wineries, it is an absolute pain to prepare the bentonite slurry and then to ensure its thorough mixing throughout the wine in tank. The bentonite–protein solid does not settle out properly in the bottom of the tank, leading to significant losses in wine volume, which is reflected in the amount available for sale. The negative impact of the bentonite on wine aroma and flavour is also the subject of on-going debate. In essence, bentonite eliminates the protein haze issue, but at a cost. This cost factor has stimulated the search for alternatives.

In a recent Wine Australia R&D newsletter entitled ‘Is it good night for bentonite?’, Dr Jacqui McRae from the University of Adelaide presented an update of some alternatives to bentonite (bit.ly/31qUOe7). In addition to getting the research aspect right, it is also necessary to gain regulatory approval for any new chemical or process that may be added to or used in wine. This needs to be done for the domestic and export markets, the latter being a potential minefield if there is not an existing international agreement regarding wine rules.

Carrageenan is a linear polysaccharide extracted from edible red seaweed. It is used in milk and brewing production as a means of achieving protein stabilisation. In a white wine trial comparing 11 different carrageenans, the kappa structural form was found to be effective in achieving protein stability without any negative sensory impact (Aust. J. Grape Wine Res. 2019, vol. 25, pp. 439–50). However, there is some question about the negative health effects of carrageenans in food production.

Polyphenols interact with protein. Grape seed powder, which is high in polyphenols, has been investigated for protein removal by additions to the juice. After fermentation, the wines were found to be protein stable. This strategy does seem a little curious to me, as a protein is sometimes used in white wine production to reduce the bitterness and astringency that results from polyphenols.

Dr McRae notes that flash pasteurisation may be effective. The process requires holding a juice at 80°C for about 30 seconds and then bringing the temperature back to normal ‘in a flash’. While this technique is used more commonly to provide microbial stability, it could also produce heat stable wines. An extension of this approach utilises the addition of aspergillopepsin enzymes to the juice just before flash pasteurisation followed by fermentation. This generates a heat-stable wine (Food Chem. 2012, vol. 135, pp. 1157–65). The enzymes are approved for use in wine in Australia, but are of limited commercial availability at this stage.

The process that caught my eye and also that of our editor Sally is the potential for the use of magnetic nanoparticles. Agnieszka Mierczynska-Vasilev and colleagues from the Australian Wine Research Institute have described the application of acrylic acid plasma-coated magnetic nanoparticles for the ‘rapid and selective removal of pathogenesis-related proteins’ from wine (Food Chem. 2017, vol. 232, pp. 508–14). In essence, the prepared nanoparticles are added to wine, a short time (around 10-minutes) is allowed for protein adsorption and then the nanoparticles are removed: a hand-held magnet was used in the initial studies. The results indicated effective stabilisation towards haze formation. In a follow-up study (Foods 2020; doi:10.3390/foods9010001), the group found that up to ten adsorption/desorption cycles still allowed effective protein removal. The overall process had little impact on the composition of phenolic compounds and organic acids, important markers demonstrating minimal effect of the treatment on overall wine composition. Expect more to come from this exciting development. 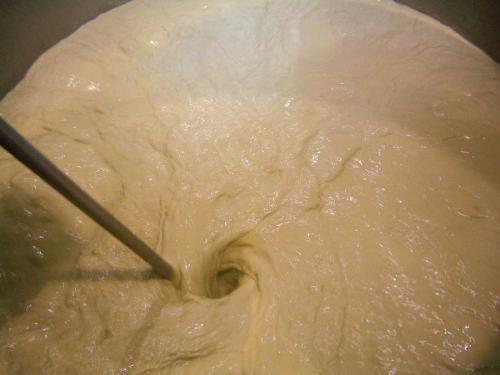