Imagine placing ice cubes into a glass of water and having the ice cubes remain unchanged and in the same state for hours, even under intense heat or freezing conditions.

This is similar to a surprising discovery made by an international team that included researchers from the University of Western Australia, Duke University (US), the Institute of Nanotechnology (Bari, Italy), Linz University (Austria) and the University of Melbourne and published in Nature Materials (doi: 10.1038/nmat4705).

However, instead of testing water, the researchers made the discovery using nanoparticles of the metal gallium.

Gallium is a soft, silvery bluish metal at room temperature that melts at 30°C. Below –18°C, gallium becomes hard and brittle.

Researcher Dr Alexandra Suvorova from the University of Western Australia’s Centre for Microscopy, Characterisation and Analysis said the researchers used advanced electron microscopy facilities at the university and imaged the atomic arrangement within the particles.

‘We discovered that, by controlling the growth of the nanoparticles on the substrate, both a liquid and solid state are possible in the metal nanoparticle at a same time,’ she said.

‘The finding was surprising, especially because of its stability over such a large temperature range.’

Suvorova said the discovery was a major breakthrough in understanding the nanoscale behaviour of gallium, and created new possibilities in science and technology and for the future development and use of gallium.

‘Gallium is an important element in electronics and is used in microwave circuits, high-speed switching circuits and infrared circuits,’ she said.

‘The discovery of this new part-solid, part-liquid nanoparticle phase could be useful in ultraviolet sensors, molecular sensing devices and enhanced photodetectors.’ 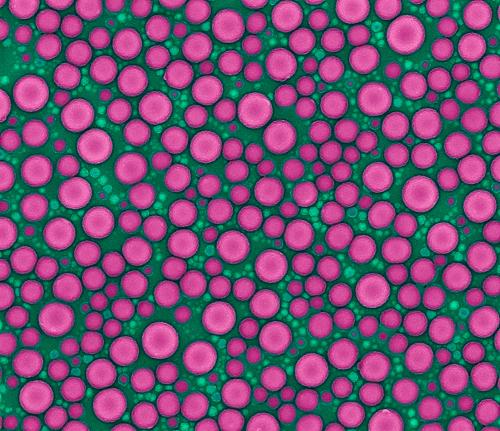