Beyond chemistry: George Orwell and 1984

Just over 70 years ago George Orwell’s book Nineteen eighty-four was published and is now recognised as a major classic of dystopian fiction. Those of you who have read the book will remember Orwell’s then seemingly prescient visions:

The Party, the Ministries of Peace, Love, Plenty and Truth, Newspeak and the Telescreen, which could never be turned off. Already, there were signs of their advent. Today, in one form or other, we are surrounded by real manifestations of those visions, yet 1984 arrived and ended much like the Y2K problem, with much concern expressed but no significant impact. Nevertheless, many people, myself included, recognise a growing movement that enables social control to be exercised through disinformation (or withholding of information) and surveillance, and that is of concern.

But what, you might ask, has George Orwell got to do with Chemistry in Australia?

In the January 1984 issue of Chemistry in Australia, I wrote an editorial entitled, ‘Futurology, From Prophecy to Rational Prediction’. It began by noting that it was 34 years ago that month since George Orwell had died in London, just seven months after his satirical novel Nineteen eighty-four had been published and achieved immediate acclaim.

Since that time I have learned much about George Orwell; to begin with his name was not George Orwell at all, that was his nom de plume. His real name was Eric Blair. In Australian vernacular Blair/Orwell might be described as a ‘knock about bloke’. He was born in India and educated at Eton. For six years he served in the Indian Imperial Force in Burma. He then lived for two years in Paris, before returning to England as a schoolteacher. Later he worked in a bookshop (see below and opposite). In 1937, he went to Spain and fought with the Republicans in the Spanish Civil War. During World War 2, he was a member of the (UK) Home Guard and worked for the BBC. Subsequently, he wrote for several newspapers in England, and for a time was a special correspondent in France and Germany. George Orwell is also credited with coining the term ‘Cold War’  to describe the standoff between the Soviet Union and the USA, in a 1945 essay entitled ‘You and the atomic bomb’.

When we visited family in Hampstead (London), we sometimes had coffee at a shop on the corner of Pond Street and South End Road NW3. One day I caught sight of a plaque on the wall of the building which states: ‘George Orwell Writer 1903–1950, lived and worked in a bookshop on this site 1934–1935’.

In the cover story of Review in The Weekend Australian, 8–9 June 2019, corresponding with the 70th anniversary of publication of Nineteen eighty-four, Rosemary Neill examined aspects of Orwell’s life and writing, and the reaction of others to it, in particular the claims that Nineteen eighty-four borrowed from an earlier dystopian novel, We, by the Russian author Yevgeny Zamyatin.

Neill discovered in her extensive research that as early as 1954, Isaac Deutscher suggested that Orwell had taken Zamyatin’s plot, characters and some themes and used them without attribution. Surprisingly, it caused little reaction at the time. But, as always, there are two sides to an argument. In his 2019 book, The Ministry of Truth – a biography of George Orwell’s 1984, Dorian Lynskey absolves Orwell of overt plagiarism, although conceding that Orwell was clearly influenced by Zamyatin. Other writers inspired by We have dutifully acknowledged the source of their inspiration.

But author and blogger Gabriel Valjan sees it the other way in his 2013 blog comparing the novels of Zamyatin and Orwell. He also told Neill that he strongly believed that an author should be obliged to make some kind of acknowledgement that certain aspects of a work have been ‘borrowed’. He went on to say that to claim Orwell’s borrowing was ‘no big deal’ is simply being disingenuous. It is probable that living modern-day authors, when copyright law is more widely understood and administered, would be sensitive to even the slightest hint of plagiarism.

Orwell’s name has been perpetuated in the adjective ‘Orwellian’, especially in reference to totalitarian development of a state. Duncan Fine, a Sydney lawyer and columnist for The Age wrote recently about the introduction of security guards at AFL football matches in Melbourne, an act he described as ‘at once menacing and also meaningless’; to which might be added, ‘Orwellian’.

On 21 August 2019, David Streitfeld wrote in the New York Times International Edition under the headline ‘Orwell didn’t write that (the typos give it away)’ that a well-known American online retailer has been selling counterfeit Orwell books, possibly as many as 13 titles, including Nineteen eighty-four. These fake books can easily be recognised by their amateurish cover designs and poor-quality printing and often are full of typos. The publishers of these books are taking advantage of Orwell’s continuing good reputation, seeking to seize a share of the market from his (genuine) books, which continue to sell well. Some fake authors claim to improve the original text (but Orwell was recognised as a master of the English language). Others are just blatant ‘knock-offs’, ignoring copyright, or are published in countries where the books are not copyright.

The large American publishers and their trade group are working to address this problem, but because of the way the book trade works, it is complex and difficult. The online retailer referred to above has removed the offending titles from their lists.

This column features the learning of chemical professionals about a subject outside their area of expertise. Readers interested to contribute are invited to contact the Editor (wools@westnet.com.au) for further information.

Deutscher I. Essay, ‘1984 – The mysticism of cruelty, heretics and renegades and other essays’, Hamish and Hamilton, London 1955. 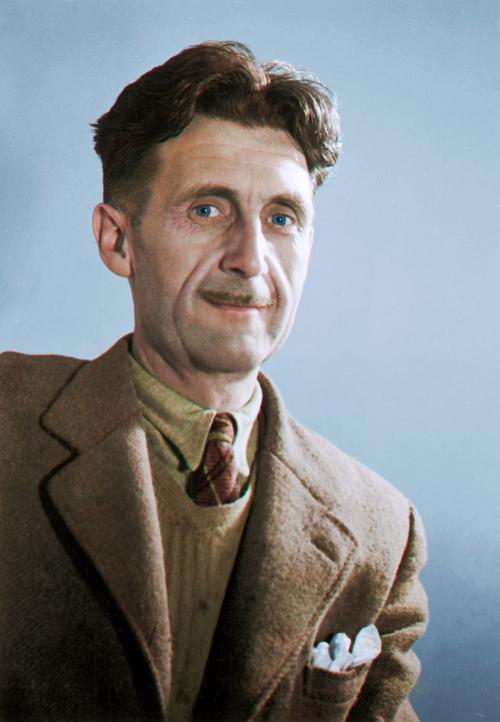 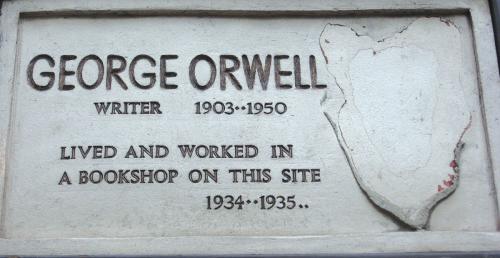 This plaque in South End Road, London, marks the site of a former bookshop where George Orwell worked and lived in the 1930s. The plaque was defaced and has since been restored.

Neill discovered in her extensive research that as early as 1954, Isaac Deutscher suggested that Orwell had taken Zamyatin’s plot, characters and some themes and used them without attribution. Surprisingly, it caused little reaction at the time.

Orwell’s name has been perpetuated in the adjective ‘Orwellian’, especially in reference to totalitarian development of a state.