﻿Beyond immediate concerns for life and property near firefronts are the less acute but wider effects of bushfire smoke, including exposure to particulates and volatile organic compounds.

Bushfires across southeastern Australia last summer focused national and international attention on the harm they cause to living things and the environment. Smoke from bushfires is one of the major biogenic sources of air pollutants in Australia. The major pollutants in smoke are carbon dioxide, carbon monoxide, methane, fine particulate matter, volatile organic compounds (VOCs) and oxides of nitrogen and sulfur.VOCs released from many common household materials are well known as indoor pollutants. Outdoors, bushfires release a cocktail of VOCs, including acetone, benzene, ethylene glycol, formaldehyde, methylene chloride, phenol, perchloroethylene, toluene, terpene and xylene. Globally, biogenic sources emit VOCs at an estimated 1250 Tg (1.25 × 1012 kilograms) of carbon each year, which is 5–10 times greater than VOC emissions from anthropogenic sources (doi.org/10.5194/gmd-5-1471-2012).

The ambient outdoor VOC concentration from biogenic sources is much less than the indoor VOC concentration from anthropogenic sources. However, the outdoor concentrations of specific VOC compounds in bushfire smoke are much higher than ambient outdoor concentrations. Concentrations of benzene (27–54 mg/m3) and phenol (12–29 mg/m3) in bushfire smoke were reported by Johnston et al. (doi.org/10.1016/j.envres.2011.05.007) to exceed the respective short-term exposure limits of 0.32–16 mg/m3 and 15.6 mg/m3, respectively. Similarly, Wentworth et al. (doi.org/10.1016/j.atmosenv.2018.01.013) noticed that the major VOC constituents in fire-influenced samples were methanol (37–44%, v/v), acetaldehyde (14–20%), acetone (8–15%), benzene (<1–6%), 1-butene (<1–4%) and formaldehyde (<1–7%). The concentrations of these VOCs are less than the short-term exposure limits of these VOCs as set by Health and Safety Executive’s (UK) Approved Code of Practice to the Control of Substances Hazardous to Health Regulations (bit.ly/2QjedsT) and WHO Air Quality Guidelines (bit.ly/38YTZLG).

Australian bushfires are well known for releasing significant amounts of VOCs (19% of total VOC emissions and more than 80% of total biogenic VOC emissions) due to the prevalence of oil-rich vegetation such as eucalypts. With more than 800 species, eucalypts are the dominant tree in the Australian landscape, and are found in all but the driest environments. They have three very closely related genera: Eucalyptus, Corymbia and Angophora. In addition to their extensive natural distribution, eucalypts are planted widely in Australia and overseas, primarily for pulp and fibre production, or for structural timber.

Eucalypts are some of the highest emitters of biogenic VOCs. They emit more isoprene and monoterpenes, formaldehyde, acetaldehyde and acetone than other vegetation such as conifers. Each year, an estimated 500 Tg of isoprene and 128 Tg of monoterpene VOCs are produced by biogenic sources. Because plant species naturally differ in rates of VOC production, land use and other global changes that result in shifts in species composition are likely to profoundly alter biogenic VOC emissions to the atmosphere.

Health effects of VOC exposure range from simple irritation to respiratory paralysis. Breathing low levels of VOCs for long periods in indoor environments has been shown to pose a risk to human health. VOCs such as formaldehyde and benzene are considered to be proven or probable human carcinogens in instances of long-term exposure (see table). These VOCs are also anthropogenic; health effects of VOCs in biogenic contexts have not been widely studied.

Globally, a growing body of epidemiology reports indicate increased rates of respiratory-related hospital admissions and premature deaths from exposure to bushfire smoke (which includes fine particulate matter (PM2.5) and VOCs). A recent study by Fann et al. (doi.org/10.1016/j.scitotenv.2017.08.024) estimated the cost of short-term exposures to bushfire PM2.5 that led to premature deaths or hospital admissions in the US at $63 billion in 2016 and long-term exposures at $450 billion in the same year. Johnston et al. examined the link between air pollution events (using PM10 levels) and mortality in Sydney from 1997 to 2004 and noticed that air pollution from smoke events was associated with a 5% increase in non-accidental mortality. Both studies focused on the impact of particulate matter, rather than VOCs in particular.

The major impacts of biogenic VOCs on the atmosphere include:

These biogenic VOCs contribute to increased ozone formation, which contributes (modestly) to climate change and global warming. Aside from the adverse health effects in humans and animals, increased ozone concentration can affect plants: a higher risk of disease, an inability to fight off pests and environmental stress, reduced growth and survival of tree seedlings, and reduced agricultural yields (doi.org/10.3390/plants8020034).

VOCs released from bushfires can also damage the ozone layer. This happens in the upper atmosphere through secondary organic aerosol formation, thus reducing the protection this offers from harmful UV rays.

Extreme air pollution events due to bushfire smoke are expected to increase as a consequence of climate change, and they are the major sources of outdoor biogenic VOCs. For her 2016 PhD thesis at the University of Wollongong (some of whose campuses were under threat in last summer’s bushfires in New South Wales), Dr Elise-Andree Guerette carried out mass spectrometric measurements of biogenic VOCs at ambient conditions and at the sites of prescribed burns (ro.uow.edu.au/ theses/4855). She indicated that her research ‘can help validate atmospheric models and further our understanding of atmospheric composition and chemistry in the relatively clean conditions of south-eastern Australia and in the highly polluted conditions of bushfire smoke plumes.’ Similarly, Emmerson et al. (doi.org/10.5194/acp-16-6997-2016) estimated the emission rates of isoprene and monoterpenes from Australian vegetation, using the Model of Emissions of Gases and Aerosols from Nature version 2.1 (MEGANv2.1). They concluded that ‘there is no single increase/decrease factor for the emissions which suits all seasons and conditions studied’.

Many studies have examined the human health impacts of anthropogenic VOCs (‘sick building’ syndrome), but limited work has been done on the health impacts of outdoor biogenic VOCs. Although the health effects of bushfire smoke are largely related to the inhalation of PM2.5, exposure to specific VOCs such as benzene can pose long-term health risks. In light of this impact on health (doi.org/10.1016/j.envint.2013.08.002), there is a need to undertake epidemiological studies examining the long-term health impacts of exposure to biogenic VOCs in bushfire smoke in various populations and for various bushfire scenarios, perhaps using chemical markers of biogenic secondary organic aerosols.

Nanthi Bolan MRACI is Professor of Environmental Chemistry at the Global Centre for Environmental Remediation, University of Newcastle. He is also Leader of Program 3 (New Products) of the Cooperative Research Centre for High Performance Soils. 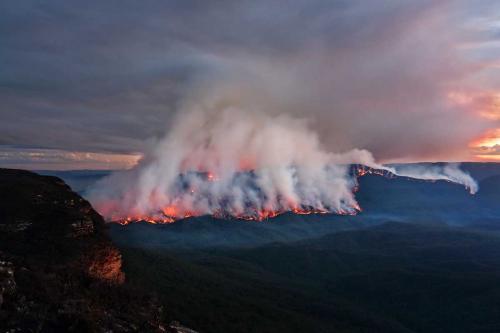