RACI inclusion and diversity: a report on progress

The issue of underrepresentation of women and minority groups in academic fields hit the headlines repeatedly during 2018.

Sexual harassment was repeatedly found to be a factor contributing to this underrepresentation, and this garnered significant media attention in parallel with the #MeToo movement. Many women recounted stories of choosing to leave science in order to avoid their harasser (see, for example, Chem. Eng. News 2017, vol. 95(37), pp. 28–37 and https://go.nature.com/2HaoVhp). The RACI has a strong Code of Ethics (www.raci.org.au/document/item/90) that prohibits sexual harassment by its members.

Separate to the issue of harassment, bias is also known to affect women’s careers (and those of racial minorities) in science. Numerous publications have appeared in the past year providing evidence of this; for example, showing the effects on publication and grant success when names are removed (a useful summary can be found in Grogan K.E. Nat. Ecol. Evol. 2019, vol. 3, pp. 3–6, doi: 10.1038/s41559-018-0747-4).

In order to improve understanding and awareness within the community about issues related to equity, diversity and inclusion, it is important to provide a robust evidence base. For this reason, the collection and dissemination of quantitative data that reveal the magnitude of ongoing problems and the progress that has been made is critical. In addition, transparency and disclosure provide a measure of accountability. We are publishing some 2018 RACI data in this article to inform our society about the current status and provide a baseline for future observations. Although the RACI has not yet collected data with respect to race or ethnicity, we have recorded data that provides a snapshot of gender diversity within the context of the RACI, the national awards and conference attendees and speakers. This should be read in the context of the RACI Inclusion and Diversity Strategy available at www.raci.org.au/theraci/advocacy/the-raci-inclusion-and-diversity-policy.

In the November 2016 issue of this magazine, membership statistics were publicised based on 2014 data. A comparison with data from December 2018 shows a significant increase in the number and proportion of FRACI who are women, from 10 to 14%. This is a direct result of the appointment of new Fellows as part of the centenary celebrations 2017, which involved awarding FRACI status on 40 female and 47 male members. There were also increases in the percentage of postgraduate student members (from 39 to 46%) and CChem (from 22 to 27%) who are women, along with a slight increase in the overall proportion of female members (from 23 to 27%).

Related societies internationally are also currently working on whether and how to collect and report similar statistics. The American Chemical Society (ACS) collects and reports data on gender, ethnicity and race; this is at a global scale for chemistry degrees and membership. The UK Royal Society of Chemistry published a comprehensive report on diversity in chemistry in 2018 (available at www.rsc.org/globalassets/02-about-us/our-strategy/inclusion-diversity/cm...), including statistics on awards and conference participation (pages 37–38 of the pdf document). In Canada, their new Working Group for Inclusion, Diversity and Equity (formed at a similar time to the RACI Inclusion and Diversity Committee (RIDC)) is grappling with how best to handle this issue.

Over the past three years since the formation of RIDC, the RACI has aimed to improve the gender balance of RACI-sponsored events by setting diversity targets (see box below) pertaining to the composition of conference organising committees and invited speakers. Imposing such targets was seen as the only way to effectively achieve gender equality in these areas. Although improving female representation in committee and speaking roles at conferences has been a major focus, reporting on events to date has been sporadic. This is now a mandatory requirement for conference chairs, as outlined in the strategy above, and from 2019 this requirement will be followed up with conference chairs.

The RACI National office has collated some data for several conferences (see graphs, right); organisers of upcoming meetings should plan to prepare a similar table. Note that this is a complex task given the plethora of different types of talks (award winners, invited speakers, keynote speakers etc.) and also given last-minute program changes, so this data may be slightly incorrect. This data shows that for these conferences, in general, the number of women offered plenary and invited speaker roles is equal to or higher than their representation in the delegate group.

Women receiving RACI awards in the past five years

A new framework for the structure of award committees, together with guidelines on taking research opportunity and career interruptions into account, has been developed by the RIDC to try to minimise effects of bias. This will be publicised once it has been approved by the Board. Statistics for the last five years of RACI awards are encouraging, particularly for the highest research award, the H.G. Smith medal, where the last three recipients (and only three in RACI history) have been female (see table below). Nonetheless, women remain underrepresented in many award categories, notably at the highest levels, such as the Leighton medal, the citations and the distinguished fellowships. At the same time, it appears that this underrepresentation occurs at the nomination stage, and it is hoped that more women will be nominated in these categories in the future. For example, no women have been nominated for citations in this five-year period, and all nominated men received an award. 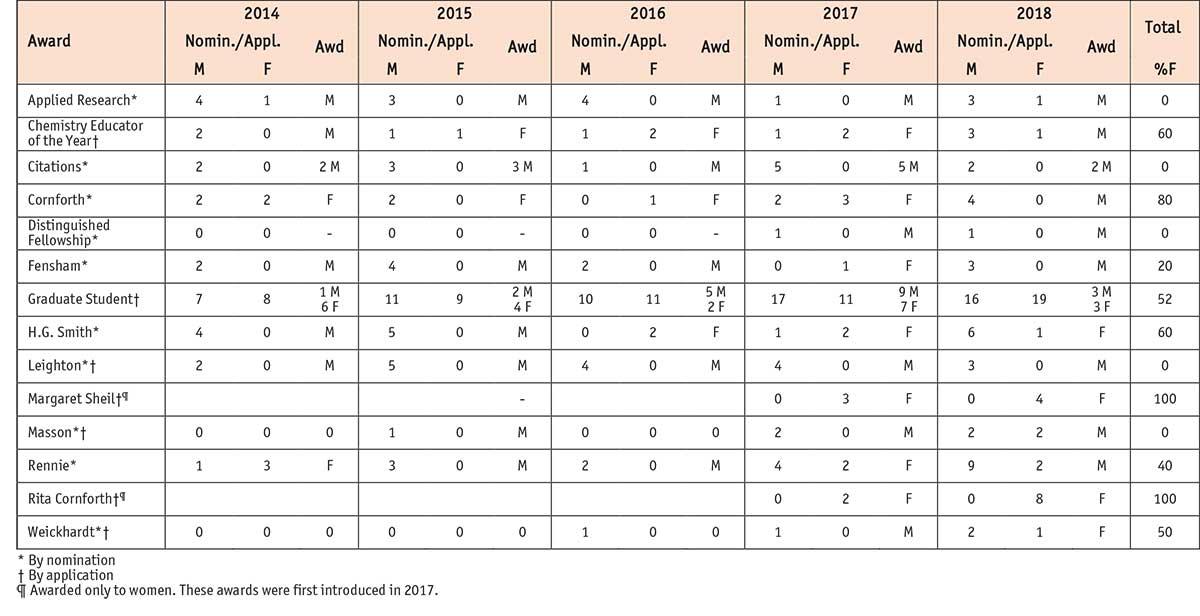 This table only includes RACI national awards; however, there are also many prestigious awards from RACI Divisions. Statistics are not readily available for these, but a cursory glance at the websites of the Divisions shows that some (such as the Athel Beckwith Lectureship, Birch Medal, Burrows and Organometallic awards) have seldom or never (Batteard Jordan Medal) been awarded to women.

The journey of the ACS in this space is relevant to the RACI. The following information has been provided by George Bodner, former Chair of the ACS Board of Directors’ Grants & Awards Committee.

One of the four goals of the ACS is to ‘Empower an inclusive community of members with networks, opportunities, resources, and skills to thrive in the global economy’, so it is not surprising that diversity and inclusion activities are numerous. Due to the scale, data about gender distribution of papers presented at meetings is difficult if not impossible to collect, as would be information about invited speakers. The Society therefore has no information about diversity and inclusion within its technical meetings. The ACS has put a lot of effort into following the gender distribution of its membership. This provides us with a baseline against which we can compare the distribution of national awards, for example.

Through a NSF-funded project entitled ‘Advancing Ways of Awarding Recognition in Disciplinary Sciences’ (AWARDS), the ACS created an Awards Equity Implementation Team that developed a set of ‘best practices’ to ensure that all nominees are evaluated fairly, that is provided to all national Award Selection Committee members. The representation of women on National Award Selection and Canvassing Committees has been dramatically increased. We have also created new Canvassing Committees for awards having few or no female nominees. Each July, letters are sent to ACS technical division officers with a list of National Awards closely tied to their division requesting help in nominating individuals from underrepresented groups. In addition, letters have been sent to department chairs of chemistry departments at RI universities requesting their assistance in increasing the numbers of women nominated for National Awards.

Looking beyond quotas and statistics

While targets and quotas have a role to play in improving equity, diversity and inclusion within the chemistry community, these are only extrinsic measures and do not directly address the root causes. Normative changes can only occur when longstanding and deeply ingrained views, opinions and biases (both conscious and unconscious) are overturned. Developing this ‘cultural competence’ requires institutions, individuals and, in particular, senior leaders to reflect upon and define the values, attitudes and conduct that will foster a more inclusive environment. Furthermore, beyond simply paying lip-service to these ideals, unacceptable behaviour will only be eradicated through strong leadership and action.

Further to the attempts to improve the diversity of representation within chemistry, effort must be directed to maintaining inclusion and providing support to aid retention and progression into senior roles. Such support might include providing an accessible, supportive and family-friendly environment at conferences and events, giving all younger scientists better opportunities to present their work, and showing zero tolerance for harassment and other offensive, discriminatory or bullying behaviour.

These changes are long overdue and will hopefully contribute to creating a more collegial, collaborative and successful professional community.

Please direct any comments or inquiries to Alex Bissember, the incoming Chair of the RACI Inclusion and Diversity Committee. 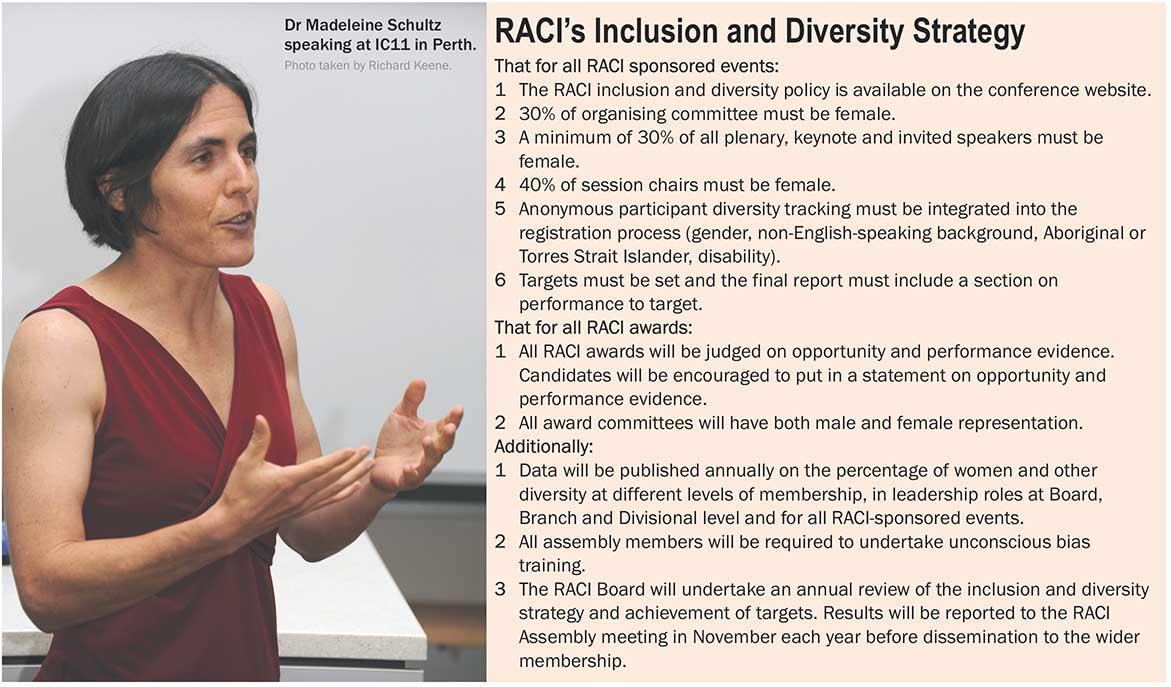 Madeleine Schultz FRACI CChem is a synthetic chemist and chemistry education researcher based at Deakin University in Geelong. She maintains an email list for Australian women in chemistry; to join please email madeleine.schultz@deakin.edu.au. Michelle Coote FAA, FRSC, FRACI CChem, is a physical organic chemist at ANU. She is the outgoing chair of the RIDC. Alex Bissember MRACI CChem is a synthetic chemist at the University of Tasmania and the incoming chair of the RIDC. 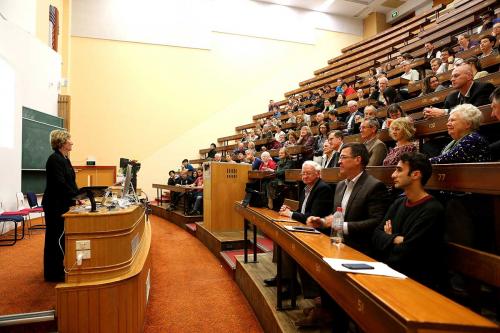 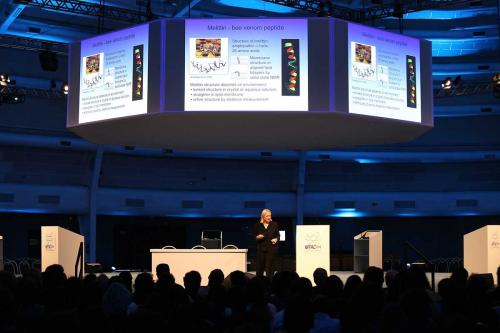 Professor Frances Separovic speaking at the IUPAC World Chemistry Congress in 2017 in Sao Paulo, Brazil, at which she received an IUPAC 2017 Distinguished Women in Chemistry award. 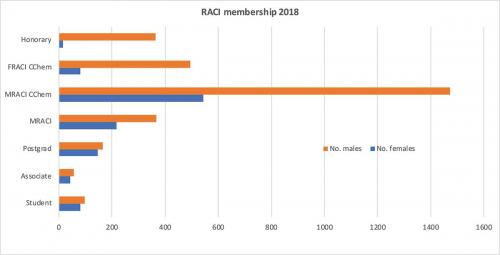 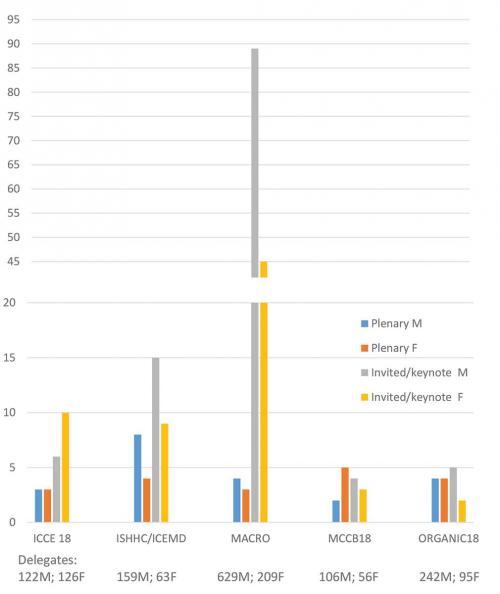