A lack of Indigenous people in chemical science is not unique to Australia. We can learn much from progress made in the US.

Chemistry is connected with the wider community through ways other than the products of chemical industry or the promise of chemical research. Careers in science are well recognised for being personally rewarding as well as having positive impacts on society. Unfortunately, Indigenous Australians are under-represented in the chemistry community in Australia. This significant issue is an example of a lack of cultural diversity within Australian science.

Generational discrimination and disenfranchisement are the most obvious causes of low representation of Indigenous Australians in the sciences (Indigenous engagement with science: towards deeper understandings, 2013, www.innovation.gov.au). Compounding this are strong perceptions that I have observed in the broader Indigenous community that the sciences are ‘whitefeller business’ and science education alienates Indigenous students from their traditional culture, as well as a stereotype in the education system that Indigenous students perform poorly in maths and science.

Science in Australia has benefited from and should continue to seek Indigenous engagement and knowledge. Ngarrindjeri man David Unaipon (1872–1967), for example, made significant contributions to Australian science and engineering, including in mechanical engineering and ballistics. Indigenous knowledge is very relevant to medicinal and food chemistry. It includes a deep knowledge of the ecology of the Australian natural environment; similarly, there is a detailed body of work associated with animal tracking and footprints, comparable to fingerprinting in forensic science, and a unique understanding of local meteorology. However, this knowledge is often passed down in an oral tradition and so until relatively recently has been overlooked by ‘mainstream’ science.

Recently, I was fortunate to undertake a study tour of US institutions that have a range of programs focused on engaging Native Americans in the sciences. The tour was supported by the Australian Government through an Endeavour Fellowship. Native Americans have been subject to many of the same exclusion pressures as Indigenous Australians, but progress in the US is better, partly because the Native Americans are very well organised at promoting wider career choices to their youth and importantly at the same time keeping links with their heritage. They have achieved this through strong networks between Native American scientists, promoting and demanding Native American inclusion into scientific professions, as well as developing strong mentoring schemes.

Lack of networks and mentoring schemes is a core barrier to cultural diversity in science in Australia. There are very few Indigenous chemists, which makes it extremely difficult to provide Indigenous students with role models to emulate and be inspired by. Most Indigenous school students cannot identify with any type of science career. This is exacerbated by a critical lack of support for scientific careers within Indigenous families and communities. For many secondary school students, the primary motivation in terms of subject choice, career direction and support is from parents and other family members. In the broader community, children generally follow their parents into similar professions, or are motivated by their parents to pursue alternative professions that offer better financial prospects. This motivation within the Indigenous community appears to be strongly directed to the medical, legal and business professions. This can be partially understood because Indigenous involvement in the medical and legal professions has been promoted for a number of years.

I and others have been developing programs in Australia to overcome these barriers to the sciences for Indigenous people at both secondary and tertiary levels. They are being developed by universities, research organisations and NGOs, such as Scientifiques Sans Frontières Australia. All of the programs aim to increase Indigenous students’ knowledge about chemistry and science in general, in an effort to retain their interest in science throughout their secondary education. These programs are getting scientists into schools and augmenting Indigenous students’ science education through access to additional resources. Mentoring networks are being established to encourage and support Indigenous students to remain within sciences, and provide guidance for their career development.

Another barrier for Indigenous students is their predominant residency in regional or remote areas. Geographical isolation prevents access to role models, educators, resources and exposure to scientific infrastructure, taken for granted by those living in capital cities. The CSIRO’s Aboriginal Summer School for Excellence in Technology and Sciences (ASSETS) is currently addressing geographical challenges by taking high-achieving Indigenous secondary students and getting them involved in hands-on programs involving academics and educators from institutions such as James Cook University and the University of Adelaide. The purpose is to overcome geographical distance in terms of resources, access to science mentors and exposure to the university experience. Similarly, the Murrup Barak Institute for Indigenous Development at the University of Melbourne runs an annual experience camp that brings Indigenous students outside of Victoria in their final years of secondary school to the University of Melbourne for five days. The purpose is to introduce students to university and city life, as well as build networks among themselves and with educators that will overcome issues of isolation when they start their tertiary education.

A lot more work is needed in this area, and one of the best examples to emulate are those run by sporting codes. The Korin Gamadji Institute, coordinated in part by the Richmond Football club and AFL, is an excellent example of tying together education, Indigenous culture and sporting achievement to assist Indigenous students to achieve in all aspects of life. Incorporating a strong science component into this model is easily achievable, and transferring this model from a sporting to science foundation is possible.

For primary school students, the Australian Academy of Sciences undertook a pilot study in 2007 (Small study – big success story: primary connection incorporating Indigenous perspectives pilot study report, 2008) exposing students to science through a coordinated interactive program in rural Western Australia. The study found no difference between Indigenous and non-Indigenous students’ interest in participating in the program and no difference in understanding the science being presented. Essentially, the most important aspect was providing an interesting and active forum for students to engage with science, which is sadly lacking in rural environments. It is hoped that aspects of this study will be trialled in other rural locations and on a larger scale in the near future.

For all of the excitement these programs are causing, we need to be honest about the task in front of us. Improving Indigenous Australians’ presence in Australian scientific community will be a multi-decade effort. The initial work has already been undertaken, and we now know what works and where we can make improvements. Importantly, continuing commitment will be needed from a range of governments, schools, universities, scientific institutions and the active engagement of individual scientists, focused on making a difference.

Colin A. Scholes FRACI CChem is a lecturer in the Department of Chemical and Biomolecular Engineering at the University of Melbourne. 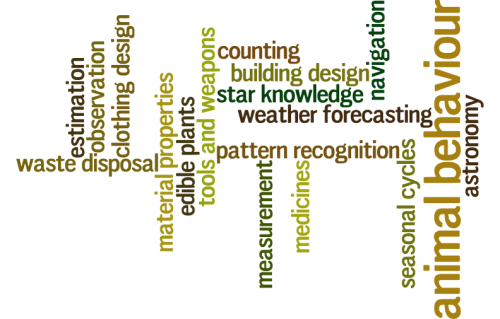 Some aspects of the deep knowledge of Indigenous Australian culture are comparable to those of the Indigenous peoples of North America, and many have much relevance to science. This illustration is based on part of a model developed by the Lower Kuskokwim School District, Alaska.