BRIDGE: tapping into a passion for science

Engaging audiences is central to careers in science and research. How to do it? Get comfortable and tell your story.

Communicating scientific research is vital to its viability, yet researchers rarely receive training in engaging with the general public. As if conducting research isn’t difficult enough, scientists are expected to be expert communicators with a firm grasp of skills more commonly learnt in an English degree than a science one.

Not surprisingly, most scientists fall short of this expectation. The consequences of this skill gap are real, and they’re having an impact on job security and career progression for researchers.

Securing grant funding is becoming more competitive and increasingly difficult. Most scientific grant applications clearly explain how something will be done, but they rarely touch on why it should be done. A lack of success in securing grants directly impacts on the ability to have a career in research, and unfortunately government funding for research is not a growth industry.

Overall, the inability to communicate science – whether to government, colleagues or the general public – can decrease the occurrence, impact and translational potential of research.

Government isn’t the only game in town

There are other funding options beyond government: consumers represent a critical – and often overlooked – engine of research funding. Mater – a Catholic not-for-profit involved in health care, research and education – is trying to connect with this supporter base. The organisation’s approach is founded upon the simple idea that scientists speaking about their own research make the best science communicators.

To upskill researchers at Mater and improve researcher interaction with consumers and attract interest from potential donors, Mater has launched the BRIDGE program. The acronym comes from ‘BRInging researchers and Donors toGEther’, but it also links into the benefits of the program: bridging the gap in understanding between researchers and the public, and bridging the gap between sources of funding for projects. The program is collaboratively developed and delivered in partnership by Mater Research and Mater Foundation.

BRIDGE provides scientists with comprehensive training on how to effectively engage with consumers and convey the importance of their research in an accessible way. The focus is less on methodology and more on why the research is going to benefit the community.

Bringing together science communicators, philanthropic engagement experts and mentor researchers, the BRIDGE program provides researchers with tools that assist in creating a broader awareness of their research through academic channels, government and other funding bodies and philanthropic agencies.

The program is open to researchers at any stage of their career. Once they move through the two workshops, participants have shown a marked improvement in their ability to communicate with the public. They’ve taken the step from including exhaustive amounts of detail, to framing presentations around one key idea, which is understandable, relevant and attractive to a target audience – and conveys the importance of their research.

There are a few basic premises that any good science communicator needs to know (this applies to everyone who wants to communicate anything):

It’s pretty simple. But it’s important not to confuse ‘simple’ with ‘easy’.

Be kind to your audience and to yourself

Only a very few, strange, strange, people actually enjoy public speaking. For the rest of us it’s an uncomfortable experience that we only do when we have to. Standing in front of a large number of people who are fidgeting, playing with their phones or whispering among themselves is enough to make you nervous. When we get nervous, we typically fall back on what we know best. In the case of a scientist, that’s science specific to their field; and when you’re talking to someone who doesn’t have a similar background to you, that’s often the wrong approach to take. The tools used to put a presentation together can also help you in more informal communication.

Thinking about how you talk about your work can help improve communication with your colleagues, stop you from boring your cousins to death over Christmas dinner when they ask how work is going, and help you explain to your boss or director how your work aligns with the goals of your organisation.

Stripping out jargon is important. Spend a minute thinking about your audience. They may be (they will be) unfamiliar with the jargon used in your field. During your presentation, article or dinner conversation, you may be introducing people to brand new concepts, as well as new language. If you want them to walk away familiar with your research, be kind to them. Build their knowledge up to the point that they can comfortably walk away with the point you think is most important.

People only have a limited attention span, and there is no shortage of research showing how the human brain is incapable of storing much information in working memory. Once people become overwhelmed – and this can happen simply by having too much information on a slide – they go into shutdown mode and are liable to take advantage of the next distraction they can find. Presenters are effectively competing with devices for the attention of their audience.

Spaceships, geostationary satellites, mobile telecommunicators, world spanning communications networks, cloning – all the best ideas come from science fiction. Because that’s what sci-fi is, the examination of an idea; and this is a particularly useful tool for scientists to consider when talking about their work.

Isaac Asimov, an author from the golden age of science fiction described sci-fi as ‘that branch of literature which is concerned with the impact of a scientific advance upon human beings’. And when it comes to those of us interested in, but not educated in, your field – the consumers, donors, fundraisers, marketing and communications teams, specialists from different fields – that’s what we need to know.

It’s not the charts, the publications or the references, it’s the ideas you are exploring, the impact of your work on people, and even the characters making those breakthroughs. It can sound trite, but do not underestimate the power of a story pitched to the right audience.

One of the first projects I reported on as a young science communicator was mobile genetic elements, sequences of DNA that can move from one location in the genome to another. I had never heard of this, and after interviewing the researcher I spent an afternoon going down the rabbit warren of Wikipedia (seven pages deep before I even started to come back up!) trying to wrap my mind around an entirely new concept.

At a recent conference in Brisbane, I watched a postdoc researcher explain these transposable elements to an audience of Year 7 science students. She used Star Wars Stormtroopers and Clone Troopers to explain the difference between a gene such as BRACA-1, of which we only have one copy – the Stormtrooper – and these ‘jumping genes’, which effectively clone themselves – Clone Troopers – meaning we can have hundreds of copies of the gene throughout a single cell.

In a five-minute presentation, she introduced a new concept to an audience completely unfamiliar with her field, and informed them how she was investigating these jumping genes to better understand how cancer metastasises. She helped them create meaning by putting her work in to a context that was more familiar for the audience. It’s not rocket science (another undeniably cool area of science, it has to be said)!

It’s a toolbox, not a template

There is no one right way to communicate research, but there are a lot of wrong ways. At the end of the day, you have to be comfortable with the way you are talking about your work.

At Mater we’ve developed the BRIDGE program to help researchers tap into their own passion to help them communicate not just what they do, but why they do it, and why it matters to their audience.

The program provides a toolbox rather than a template. One of the most valuable components of the program is feedback from fellow researchers. Hearing constructive advice from peers and colleagues with expertise in different and diverse fields is of enormous benefit. And the realisation that even fellow scientists need to understand your work at a lay level is invaluable. Research has become so specialised that it is possible, even likely, that people in adjacent fields will have only minimal exposure to the work that you do.

Just think of a psychologist and geneticist talking about their work. They’re both in the medical research space, both aiming to improve people’s quality of life, yet they may barely share a language between them if they don’t strip out their jargon. Even for these highly intelligent people, George Bernard Shaw (allegedly) summarised the challenge well: ‘The single biggest problem in communication is the illusion that it has taken place’. I say ‘allegedly’, because there’s debate whether he ever said that quote, or if it should be attributed to William H. Whyte. Unlike plenty of medical research challenges, that’s a conundrum that may never be solved.

It’s all too easy to provide more information than is needed; but this can be counter-productive.

There are two simple reasons to consider paring back the amount of information you share:

If you write a book, and people want you to write another one so that they can learn more, that is the definition of success.

So next time you have to present, write an article, or explain to a family member what you do for a living, I hope you take a few moments to think about the best way you can communicate your work.

Take a moment to think about what is interesting and important about your work, and what it is that your audience actually needs to know.

With a bit of practice, you’ll have your audience focused on you, and not on their phones.

Shannon Ryan (Shannon.Ryan@mater.org.au) is a Philanthropic Engagement Manager at Mater. He plays a key role liaising between Mater Research and the philanthropic ministry Mater Foundation. 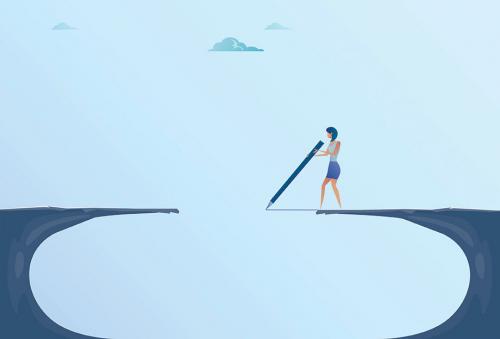 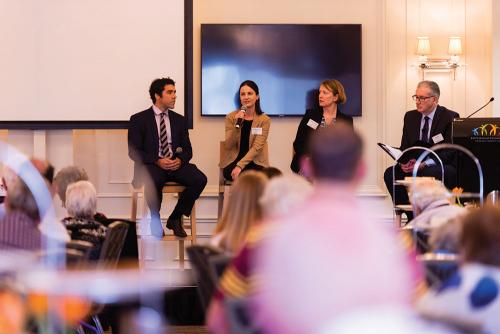 A geneticist, a pharmacist and a dietician sit on a panel – how do they have an engaging discussion?

BRIDGE provides scientists with comprehensive training on how to effectively engage with consumers and convey the importance of their research in an accessible way.

The BRIDGE program provides researchers with tools that assist in creating a broader awareness of their research through academic channels, government and other funding bodies and philanthropic agencies.

There is no one right way to communicate research, but there are a lot of wrong ways.