Historic inorganic pigments are still used by painters, alongside the products of the modern chemical industry. The colours are mostly due to the presence of transition metal ions – green from copper; blue from copper, cobalt or iron (remember Prussian blue); yellow from chromium(VI). But one blue pigment is quite different. It occurs naturally in the mineral sodalite (see the photo of my personal sample), and in the gem form of the mineral lapis lazuli. There is a synthetic version, too, known as ultramarine and prepared by heating together various inorganic materials.

As well as its use by painters, ultramarine was applied to cotton clothing to colour-balance the yellowing that follows continual use and exposure to sunlight. The Reckitt company made their money by marketing this ‘blue’ for use in laundries. These days, many white fabrics are ‘dyed’ with colourless organic dyes that fluoresce blue-violet in daylight. Known as fluorescent brighteners, they are used to achieve the colour balance. Reckitt’s product came in small bags of compressed blue powder that went into the rinse after the washing was complete. Because the bags were about the size of the top joint of a thumb, it was often referred to as ‘thumb blue’. Recipes for making it were published in various places but, like most ‘well-known’ processes, making it work in practice required a certain skill. In the early 19th century, both British and French governments offered prizes for the production of ultramarine.

Attempts to produce a synthetic equivalent of lapis lazuli began in the early 19th century with analysis by European scientists of the natural product. As with most mineral analyses, the results were expressed in terms of oxides: soda 9%, alumina 31%, silica 42.5%, lime 3.5%, and sulfuric acid 5.9%. Fusing sulfur and sodium carbonate at red heat and sprinkling in sodium silicate and sodium aluminate – all in the correct proportions – produced ultramarine of variable quality, depending on the experimenter. Eventually it was found that heating to redness a mixture of kaolin (China clay), sulfur and sodium carbonate was a reliable way to produce a good product that could be regarded as a compound of aluminium silicate, sodium silicate and sodium sulfide. Modern mixtures include some charcoal or coal as a reducing agent.

Replacing sodium with potassium did not produce a blue colour, showing that the sodium is essential to the production of the blue colour. The calcium aluminium silicate lattice structure of the mineral, and presumably of the synthetic ultramarine, was established in 1929 by X-ray crystallography. There are large (on the molecular scale) cavities where sodium ions reside, their charges balanced by chloride, sulfate or sulfide ions. The blue colour is due to the presence of S3– ions that contain an unpaired electron.

In the 1860s, somebody in Melbourne had worked it out and started a factory to produce this thumb blue. He was William Sloggatt (1823–1900), a Cornish immigrant who arrived in 1851 at the age of 28 and went into business in the city as a trader. A decade or so later he moved to the then outer suburb of Malvern and began to manufacture ‘blue’. His 1861 patent application described:

The fact that he called his product thumb blue suggests that he was aiming at the laundry market.

I found more information on the website of the Malvern Historical Society, one of whose members had researched Sloggatt’s career. With a partner, Sloggatt became the owner of land in Glen Iris, adjacent to Malvern, and they named the estate ‘Valency’ after Sloggatt’s birthplace in Cornwall. I couldn’t find Valency on modern maps, but there is a Valency River that flows north and enters the sea near Boscastle, and closer to home there is Valency Road in Glen Iris, where Sloggatt’s house – also Valency – once stood.

Sloggat was an amateur painter and had some of his oil paintings exhibited by the Victorian Academy of Arts, so I wondered if he used his blue (ultramarine) as a pigment in his work. I have been unable to track down any of them, so this has to remain an open question. 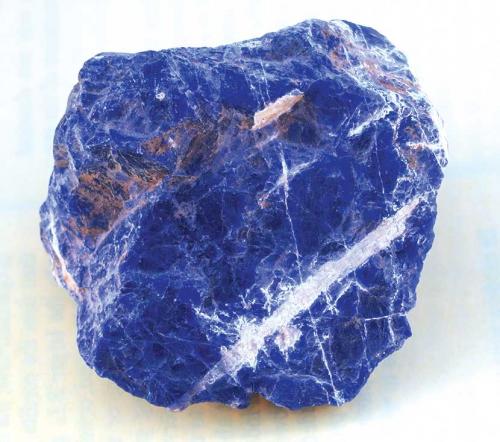