Hydrogen: fuel of the (far-distant) future?

Across the research and development community, there is a fascination for the use of hydrogen as a transport fuel, especially for cars fitted with fuel cells. The attraction comes from two drivers. The first is that hydrogen combustion does not emit carbon and thus the use of hydrogen is an alternative to battery-powered vehicles for decarbonising the transport fleet. The second is that internal combustion engines are not very thermally efficient while theoretically at least fuel cells have a much higher efficiency. Today, there are many examples of demonstration programs, many supported by the vehicle manufacturers, for hydrogen fuel cells and the required infrastructure. A small demonstration program has recently been announced by the ACT Government, supported by Hyundai and Siemens and others associated with the renewable fuels industry.

Three steps are required for the effective use of hydrogen-fuelled vehicles, each requiring significant innovation before practical use can come to fruition:

Hydrogen is widely used in the hydrocarbon processing industry, including oil refining where it is produced as a by-product of dehydrogenation processes, such as naphtha reforming to produce aromatics for fuels and chemicals. These processes are supplemented by steam reforming of natural gas (or partial oxidation of natural gas). The coproduced carbon monoxide is converted to more hydrogen by the water-gas-shift process and the coproduced carbon dioxide is extracted by an absorption process. Nowadays, many plants separate pure hydrogen from this product stream by using membrane or PSA separators. The natural gas route is considered the most efficient and cheapest method for producing hydrogen.

One concept for hydrogen distribution is to have a large centrally placed production facility that distributes the hydrogen to retail forecourt sites. Such a central facility would produce about 400 kt/year of hydrogen, enough to provide over 2 million vehicle fills. The large facility would maximise the benefits from economies of scale and my estimates for the production cost from such a facility is shown in the following graph (data extracted from US National Academy of Science reports). Gas priced below US$4/GJ (HHV basis on which gas is usually sold) would produce hydrogen below $7/GJ (LHV basis, which is the way the hydrogen is used).

How this stacks up against gasoline (petrol) prices is shown in the next graph, which illustrates the change in the traded price of petrol expressed in energy units (US$/GJ, LHV basis) on the Singapore market as the price of crude oil (Tapis blend) changes. If we assume that a vehicle fuel cell has an efficiency of 55% and petrol engine of 30%, then the price equivalent cost of hydrogen is shown on the top line. Thus with prevailing oil prices at $60/bbl, the petrol price is US$12.50/GJ and the hydrogen equivalent price is US$23/GJ, which is achieved with gas prices below US$14/GJ (see graph above). Since gas prices (even in Australia) are well below this, all seems well and good. Unfortunately, there are a couple of issues that spoil this rather rosy picture.

One is the basic assumption that a fuel cell vehicle will operate at significantly higher efficiency than a modern petrol or diesel hybrid vehicle. In practice, when losses from the fuel cell to the electric drive and drive chain are taken into account, there may not be much difference. This would reduce the target production cost for hydrogen to a similar order for petrol or diesel unless the consumer is happy, or forced, to pay more for the privilege of a hydrogen vehicle.

Because of its innate properties, for a reasonable operational mileage, hydrogen has to be stored on board the vehicle at very high pressure, typically 350 bar or even 700 bar. These are very high pressures for an application as common as vehicle refuelling.

Hydrogen at these pressures is very dangerous. Leaks can spontaneously ignite. The flame is at more than 2000°C, which melts metal structures holding the pipeline or storage facility together. I once worked on a hydrogen plant that operated at over 200 bar and was built in 1936. All the pipe-work was extremely thick; it was made by the Woolwich Arsenal, which had the specialist equipment to manufacture it. To prevent destruction from hydrogen leaks, the whole plant was clad in more than 4 inches of blue asbestos and stood behind a thick brick wall to further protect operators. Only senior qualified graduate engineers were allowed to tackle leaks behind the wall, much to the fear of the tradesmen, because often the engineers would feign ignorance of which way to turn the 6-inch diameter bolts to tighten gaskets. I would hope the mechanical engineering design has improved since then.

Hydrogen production facilities tend to operate at about 30 bar for steam methane reforming (and 100 bar for partial oxidation). A rough estimate is that to intensify the pressure from 30 to 350 bar in a central facility producing hydrogen, it would require 85 MW; and to compress to 700 bar, it would require about 125 MW. This would represent a serious cost penalty, especially if the power was from wind or solar generators.

What about different approaches? The marginal (no capital considered) cost of production of hydrogen by electrolysis is illustrated in the graph above. Wind and solar generation costs are generally in excess of $100/MWh (unsubsidised basis) and production by this route is clearly very costly compared to conventional fuels. This is further exacerbated by electrolysis generally occurring at or near atmospheric pressure, which will incur vast compression costs to bring the product to a 350 bar filling pressure. This issue has been addressed by some developers trying to use electrolysis at high pressure (Honda).

In the research stage are several routes to produce hydrogen by solar irradiation, missing out the photovoltaic and electrolysis steps. This is very much a research activity and as yet is well away from a demonstration facility, let alone commercialisation.

There are also developments in using small-scale PV for distributed hydrogen generation (household make-your-own hydrogen). How proponents solve the problem of providing homes with 350 bar hydrogen compressors is somewhat unclear.

The pressure problem can be overcome by moving to liquid hydrogen storage. Insulation size would restrict this to larger vehicles and does not address the compressor cost for cooling the gas to below the critical point (–240°C).

Across the board, the hydrogen economy is replete with research and demonstration projects pushing boundaries with innovative solutions. Unfortunately, as this analysis shows, the hydrogen economy for Australia is still a long way off. Hydrogen may be destined to be the fuel of the future but will always remain so. 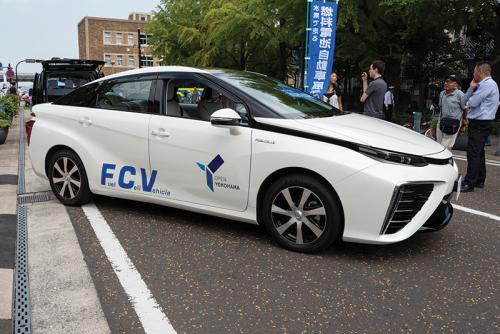 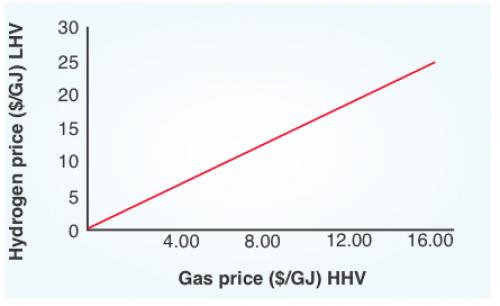 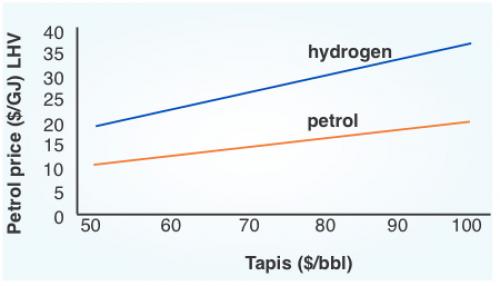 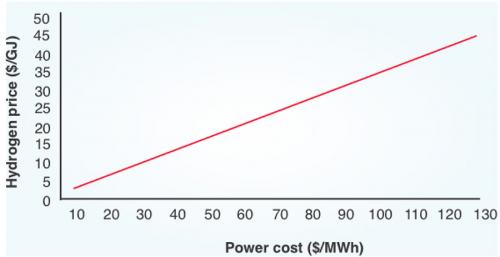 Because of its innate properties, for a reasonable operational mileage, hydrogen has to be stored on board the vehicle at very high pressure, typically 350 bar or even 700 bar.