These fascinating facts about the chemistry of teeth make for perfect conversation next time you’re in the dentist’s chair – if you can get a word in.

Few sounds inspire such universal loathing as the high-pitched whine. The mosquito in a dark room, the midnight toddler, the dentist’s drill – all are generally met with dread and revulsion. So we hope that our teeth and gums will let us avoid the dentist’s chair. Our teeth are much more chemically complex than most of us realise. Most chemists would think of bone and teeth as hydroxyapatite, Ca10(PO4)6(OH)2. In fact, this mineralisation is of a more complex form, carbonated, with substantial fluoride and cation substitution (mostly Na, but also Mg, K): Ca10–xNax(PO4)6–y(CO3)z(OH)2–uFu. The carbonate substitutes phosphate, but not on a 1:1 stoichiometric basis, and the resulting lattice structure is appreciably disrupted.

During tooth decay, the mineral is subject to two primary forms of attack: direct acid dissolution, and decalcification via chelation with dissociated organic acids such as citrate or lactate. Mineral acids such as hydrochloric would, of course, be even more effective in their attack, but are relatively uncommon in the mouth.

Acids can come from your food and drink, but bacteria make matters even worse. These bacteria, particularly Streptococcus mutans, feed on sugars in your mouth, creating organic acids (such as lactic acid). Lactobacilli are then involved in the progression of decay.

The two main mineralised components of teeth – dentine and enamel – have quite different structures, notwithstanding their similar components: carbonated hydroxyapatite, water and organic molecules (mostly protein and lipids). Featherstone and Lussi (Dental Erosion, doi: 10.1159/000093351) show that while enamel contains 96% by weight mineral, this is only 85% by volume, the presence of 12% water and 3% protein/lipid by volume allows molecules to diffuse through the enamel. As Mrs Marsh said in a well-known toothpaste advertisement back in the 1970s, the liquid really does get in.

By contrast, dentine – the substructure of the tooth, underlying the enamel – has a much lower mineral content: 47% by volume, with 20% water and a much higher organic content (33% by volume). The higher water and organic content allows greater and more rapid diffusion of dissolved attacking species, and therefore makes the dentine more vulnerable to attack.

The chemistry of dental decay is yet more complex. Both dentine and enamel are composed of very fine-grained individual crystals. In enamel, about half of the organic material is present as a very thin covering over these individual crystals, with the other half being lipid. As such, any liquid-based chemical attack must first diffuse past any surface plaque, the pellicle (a continually regenerated surface layer of salivary proteins and phospholipids), the enamel crystal lattice, and then the protein sheathing on the crystals themselves.

The chemistry of the attack is strongly pH dependent. This directly influences the available H+, but it also affects the dissociation of organic acids. At pH 2, the hydrogen ions in citric acid directly attack the mineral surface. At pH 7, citrate draws calcium out of the mineral, and at intermediate pH both mechanisms occur.

Conversely, if the calcium level is saturated (a strongly pH-dependent relationship), then as saliva neutralises the acid in the presence of fluoride, fluorapatite (Ca10(PO4)6F2) forms near the surface. This is much stronger than carbonated hydroxyapatite, and the added protection it provides is the basis for the fluoridation of toothpaste.

In the event of the cavity comes the drill. Even prehistoric humans were apparently willing to give that a go (as evidenced by teeth found at a site in Pakistan, dating to about 7000 BCE), but I’d imagine that the whining came from the patient, not the flint.

For the past 150 years, dentists have been filling cavities with mercury amalgam. The technique comes in various forms, but the dominant variety uses liquid mercury mixed at the point of use with a 1:1 ratio of fine-powdered dental amalgam alloy (typically 67–74% Ag, 25–28% Sn, and up to 6% Cu, 2% Zn and 3% Hg). The resulting mixture is more than 50% mercury. It sets into position rapidly, and then cures within hours to form a relatively resilient moulded shape that prevents ingress of bacteria and liquid.

The setting amalgam is placed into the prepared tooth cavity and compressed firmly. Excess mercury rises to the surface, where it is removed by the dentist. The two phases react to form a body-centred cubic g1 Hg–Ag phase and g2 Hg–Sn phase, with a significant proportion of unreacted Ag3Sn and Hg from the two starting materials, which continue to react very slowly.

Understandably, this technique has yielded significant concern about the potential toxicity of (particularly) the mercury to both the patient and dental staff, both during emplacement and removal, and with long-term exposure. Over time, the amalgam tarnishes (especially through sulfidisation) and undergoes galvanic corrosion between the more electronegative g2 phase and the g1 phase. Moreover, there is additional concern about the toxicology of dental amalgam in crematoria and safe disposal from dental offices.

A 2006 study by the European Commission concluded that ‘there is no scientific evidence [that] risks of adverse systemic effects exist and the current use of dental amalgam does not pose a risk of systemic disease.’ (bit.ly/2GbePxT)

Nonetheless, the emplacement of mercury amalgam requires the drilling of larger cavities (greater tooth tissue removal) than newer technologies, it doesn’t bond well with the tooth surface, and the resulting fillings are not tooth-coloured. They are therefore typically not used except for posterior teeth. The technique is being taught at fewer dental schools, and it is banned altogether in Norway and Sweden.

The substantial number of variations makes quick description difficult. In simple terms, composites consist of some combination of a polymerisable resin base (for in situ placement) and a ceramic filler (for strength) varying from nano to macro size (0.005–100 µm), usually with other components such as etching and surface bonding agents. Curing is usually initiated using a laser, plasma-arc or other high-intensity light source, often within narrow wavelength bands in the visible spectrum (470 ± 20 nm).

The filler particles are typically inorganic – silica/alumina glass and/or sodium fluoride – often coated with silane coupling agents (such as trialkoxysilate) to foster covalent coupling between the filler and resin matrix.

Early versions of composite materials were not favoured by dentists because the etching, bonding, emplacement and curing steps were separate, consuming clinical time. More recent materials combine these steps, seeing greater clinical take-up, with the ultimate goal being to achieve a single-step composite.

Glass ionomers, compomers and giomers are different polymerisable combinations of monomers and hard-wearing materials. Ultimately, the goal in every case is to create a filling that is malleable to the cavity in the first instance, then durable and physically stable so that it protects the tooth without excessive shrinkage, cracking or wear on either the tooth itself or its touching opposite (which is a problem with some of the harder ceramic materials). Even one-millimetre cracking or shrinkage can be a major problem, given that Streptococcus mutans is only 0.1 millimetres in size.

The bacterial effect of the material is also an issue. It is believed that mercury amalgam is mildly bactericidal. However, TEGDMA stimulates the growth of Streptococcus mutans and Streptococcus salivarius in a pH-dependent manner. If the bacteria can continue to grow under the filling, then the possibility of secondary cavities can continue to cause problems.

The European Commission study also assessed the potential risks with these newer, alternative dental treatments, and concluded that ‘dental health can be adequately ensured by both types of material [amalgam and composite]. All the materials are considered safe to use and they are all associated with very low rates of local adverse effects with no evidence of systemic disease.’

Ultimately, 9 out of 10 dentists (shown only from the rear) would recommend the proven preventative strategies for oral health: regular brushing and flossing, avoiding sugary foods and snacking between meals, fluoridation of the water supply, and regular check-ups with your dentist. It seems that the dental chair can’t really be avoided after all.

Fillings that heal your teeth

Researchers from the University of Nottingham, UK, and the Wyss Institute at Harvard University, USA, have developed therapeutic synthetic, light-curable, biomaterials for dental treatments that support native dental stem cells inside teeth to repair and regenerate dentine.

The approach could significantly affect millions of dental patients each year by dental fillings that help heal teeth when they are injured from dental disease or dental surgery.

The research received second prize in the materials category of the Royal Society of Chemistry’s Emerging Technologies Competition 2016.

Dr Adam Celiz, formerly Marie Curie Research Fellow at the University of Nottingham, said ‘Existing dental fillings are toxic to cells and are therefore incompatible with pulp tissue inside the tooth. In cases of dental pulp disease and injury, a root canal is typically performed to remove the infected tissues.

‘We have designed synthetic biomaterials that can be used similarly to dental fillings but can be placed in direct contact with pulp tissue to stimulate the native stem cell population for repair and regeneration of pulp tissue and the surrounding dentin. Our approach has great promise to impact the dental field and this prize provides a great platform to develop this technology further with industrial partners.’

In 2014, Celiz was awarded a Marie Curie International Outgoing Fellowship to build his own research program at the Wyss Institute for Biologically Inspired Engineering at Harvard University.

Last year, Celiz received yet more recognition for his innovative development of biomaterials for dental treatments. He was awarded the Larry Hench Young Investigators Prize by the UK Society for Biomaterials (UKSB) for developing dental alternatives to root canal treatment. The £500 prize is awarded to a promising young research scientist in recognition of outstanding and innovative contributions in a selected field of biomaterials research.

In May last year Celiz won first prize in the ‘Innovation and Entrepreneurship’ category of the 2017 Marie Curie Awards. He is now part of the Department of Bioengineering at Imperial College London. 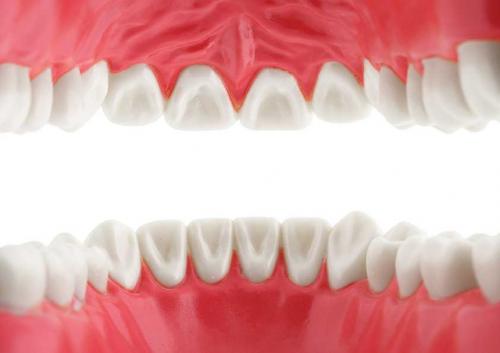 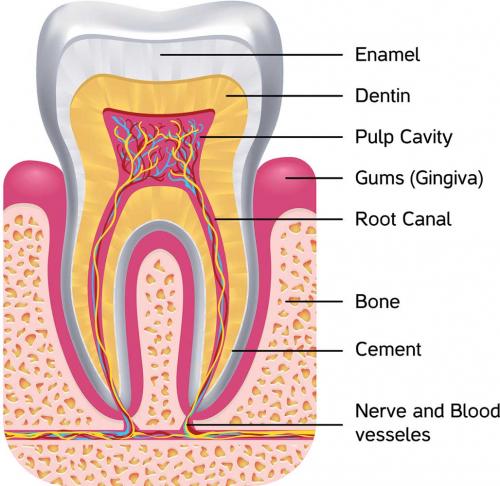 Anatomy of a tooth. 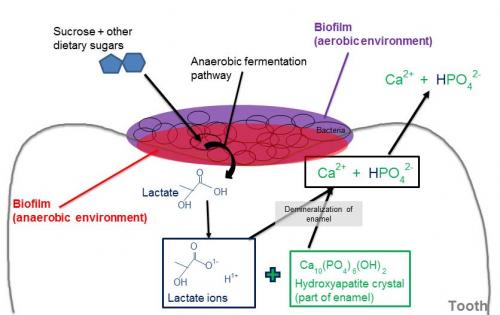 Microbe communities attach to the tooth surface and create a biofilm. As the biofilm grows, an anaerobic environment forms from the oxygen being used up. Microbes use sucrose and other dietary sugars as a food source. The dietary sugars go through anaerobic fermentation pathways, producing lactate. The lactate is excreted from the cell onto the tooth enamel, and then ionises. The lactate ions demineralise the hydroxyapatite crystals, causing the tooth to be degraded. 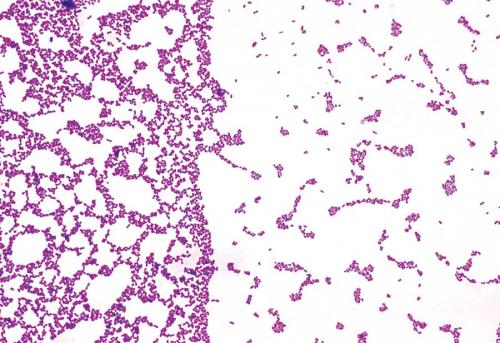 During tooth decay, the mineral is subject to two primary forms of attack: direct acid dissolution, and decalcification via chelation with dissociated organic acids such as citrate or lactate.

... the goal ... is to create a filling that is malleable to the cavity in the first instance, then durable and physically stable so that it protects the tooth without excessive shrinkage, cracking or wear on either the tooth itself or its touching opposite.