A visit to Russia

In 1992, I attended a conference in Uppsala, Sweden, visited our children, both of whom were studying in England, and came home via Moscow to visit Igor Dolgy, the chemist I had befriended through the medium of philately. Igor and his wife, Marina (also a chemist), offered accommodation but the Russian government would not issue me a visa until I had (a) a formal invitation for a professional visit, and (b) a reservation in hotel chosen for me by the government agency, Intourist.

Igor, who owned a car – a Lada (aka Fiat 124) – met me at the airport and drove me to the hotel, where I checked in and then left to go to the Dolgys’ apartment, which was near a Metro station a few kilometres east of the centre of the city. The family was able to use the car – when they could buy petrol, and I saw some very long lines at service stations – to travel outside Moscow. They parked their car outside their apartment block but they were always careful to bring the battery and the windscreen wipers inside to avoid theft.

Another indication that life in Moscow could be tough was their behaviour in the apartment. Once the lights were on, the blinds were always drawn so that people across the way in the next building could not peep in to see the Dolgys’ possessions, which included some fine porcelain that Igor had collected in his travels. Igor didn’t speak English but was fluent in German, having spent three months in 1974 in Göttingen, West Germany. My half of the conversation consisted of what I could remember from Science German classes (a requirement for the MSc degree when I graduated in the late 1950s). Marina had good English, and as we chatted on the way to the Metro one day, others heard us and joined in to practise their English. At least, that’s the reason they gave, but Marina discouraged them and told me later that were likely to be informers. Soviet ways were dying only slowly in the new Russian Federation!

Marina had spent some time in Britain under a youth exchange scheme, but later completed her PhD and worked at the Nesmeyanov Institute of Element-organic Chemistry, where her research group was under great pressure to produce results of commercial significance. One challenge they faced was to do something with the waste yeast from the brewing of beer, a substantial industry in Russia. I mentioned the production of Vegemite from spent yeast and once I got home I sent some samples.

By 1986, Igor and Marina had saved enough to buy a 1200 m2 plot in the country and started to build a summer house (dacha). Following a visit to the monastery town of Zagorsk, they took me to see the dacha, where we enjoyed a meal and picked wild strawberries in the woods. As we walked around the small village, Igor pointed out the dacha that had been owned by the physicist Pyotr (Peter, as he was known in the west) Kapitsa. Kapitsa (1894–1984) worked with Rutherford for ten years at the University of Cambridge. In 1934, he returned to Russia on a visit, but once ‘home’ he was barred from returning to Britain. He was awarded the Nobel Prize in Physics in 1978 for his work in low-temperature physics, which included the discovery of superfluidity in liquid helium.

On that drive out of Moscow to Zagorsk and the dacha, I was trying to follow our journey on a map I had torn from an Australian magazine, but it didn’t seem to correspond to the directions we took and the roads we drove on. Igor laughed when he saw it, and said that maps like that were deliberately distorted and provided by Soviet/Russian authorities to confuse the enemy. There was more along these lines, because the Dolgys had a telephone, and it rang occasionally, but there was no telephone book. If someone wanted you to call them, they would give you the number, I was told.

Composing this reminiscence, I couldn’t find a photograph of Igor among the many I took in that brief visit to Moscow. An accident? Maybe, but you don’t need to spend very long in Moscow to feel creeping paranoia. I did find the photograph of the dacha that you see here, and firmed in my mind that Igor must have had a privileged position in society and was likely a Party member. In the mid-1990s, however, the letters stopped coming and on three subsequent visits to Moscow I was unable to contact him. By then, there was a telephone directory but it seemed awfully small for a city of ten million people … and there were no Dolgys in it. 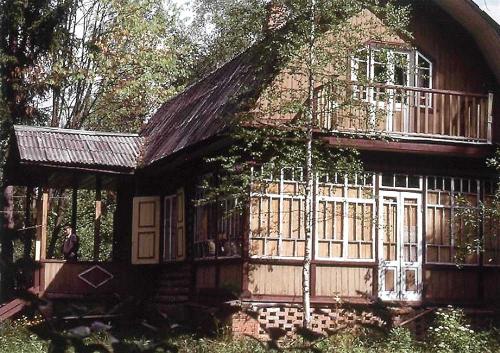