Compared to most of the developed world, when it comes to rubbish, Australia is a lucky country, because our rubbish can be disposed of at relatively low cost. Rubbish is taken away from homes and industry and dumped in landfill. Some, but not much, is sent for recycling, but full recycling rates are relatively low. Excess recyclable rubbish is shipped off-shore for recycling or even dumped in other countries. And for intractable waste and excess recyclable material, the cost of storage in large warehouses is minimal – out of sight, out of mind.

Unfortunately, this happy situation has been disrupted by a recent Chinese decision to stop importing other countries’ rubbish. This decision has caused consternation among rubbish disposal contractors and local authorities, who now have to consider alternatives.

In many other wealthy countries, local authorities are legally obliged to minimise landfill by maximising recycling and using incineration to reduce the volume of the waste going to landfill. Thirty years ago when I came to Australia, domestic incineration was widespread – most houses on quarter-acre blocks had a small domestic incinerator in the back yard. Since then, local environmental regulations, considerably reduced block sizes and the growth of apartment living have rendered a return to that practice difficult if not impossible.

Australia has not embraced industrial incineration of waste to any significant extent, but the inability to export waste may soon force state and local authorities to evaluate the technology in order to minimise and dispose the waste stream going to landfill or storage.

Other than recycling, there are three approaches to reducing the volume of municipal waste going to landfill: pyrolysis, incineration and gasification. For all three methods, the municipal waste stream is sorted as much as possible. The objective is to separate out material that leads to the optimum operation of the plant from non-combustible materials that could be recycled, such as steel, aluminium, concrete/bricks and glass.

The separated waste stream, which now contains food waste, plastics, paper and other carbon-containing products, is sent to the facility. Industrial waste can also be merged with this stream. Often, industrial waste streams are relatively ‘clean’ in that the stream contains only one type of material – waste oil, for example – which requires little, if any, sorting or pre-treatment.

In pyrolysis, the sorted waste stream is heated to about 600°C in the absence of air; the materials thermally decompose to generate combustible gases, liquids and a carbon-rich solid ash. The gases and liquids can be used to operate the pyrolysis unit. The ash occupies considerably less volume than the entering waste stream and so achieves the objective of reducing the volume of material going to landfill.

This type of technology has been developed in the past for upgrading poor-quality coal. The products were a combustible solid of higher calorific value than the coal and a liquid that had the potential of a crude oil substitute; the gaseous products were used to fuel the process. Large demonstration plants were built but the technology never took off. Another variation of pyrolysis is in the production of shale oil from shale rock, which was demonstrated in large facilities near Gladstone.

The pyrolysis route for handling municipal waste has fallen out of favour compared to incineration, which is generally the most widely used process. A common method is shown in Figure 1, which illustrates the operation of a vibrating grate incinerator.

In a vibrating grate incinerator, the sorted waste stream falls onto a vibrating grate, where the waste burns to release combustion gases and ash. The ash falls through the grate and is collected in hoppers. The hot combustible gases are further burned higher in the incinerator and the hot flue gas goes to a waste-heat boiler to generate steam.

The ash contains a significant portion of metals and is often sent to a metals extraction facility before final disposal to landfill.

The third method is gasification, where the waste is burned in a restricted quantity of air to form carbon monoxide and hydrogen; this is subsequently burned, generating steam. Although more complex and costly than an incinerator, the process operates at a higher thermal efficiency, generating more steam and power (see Figure 2).

There are several variants on the design of gasifiers for municipal waste. The waste feed is finely shredded and fed by a screw conveyer or in a stream of inert gas to the gasifier, where partial combustion occurs to form a synthesis gas (syngas), which ascends up the gasifier. Ash falls to the base through a rotating grate, which prevents clogging. Ideally, the temperature is high enough for the ash to form a molten slag. The syngas, which contains a lot of particulate matter, is passed through a cyclone, where the solids are separated and mixed with the slag from the gasifier and further heated into a slag in a slagging kiln. The slag is drawn from the kiln (not shown) for disposal. The syngas is then burned in a combustion chamber and the hot gases are passed to a waste heat boiler to generate steam.

In variations of incinerators and gasifiers, the waste heat boiler produces steam for central district heating or, more commonly, for generating power that is fed into the local electricity grid.

Municipal waste varies in calorific value, which can be exacerbated by seasonal issues. These variations affect the performance of the incinerator or gasifier. To mitigate this, a high calorific fuel, such as waste oil or natural gas, can be added. Furthermore, combustion is improved if enriched air is used. For gasifiers, this boosts the operating temperature, ensuring a molten slag product.

One of the main concerns with incinerators and gasifiers is the emission of highly toxic materials, such as dioxins and mercury, in the flue gas. A significant amount of flue gas treatment is required to ensure emissions are within legislated emission standards.

The destruction of municipal waste in incinerators and gasifiers is capital intensive. Costs increase further if gas or oxygen is used to optimise efficiency. Many jurisdictions regard generated electricity supplied to the grid as renewable power and this attracts appropriate credits. However, the electricity benefit and sale of any recyclable material does not cover the operational costs, and the main income stream is upfront charges to the municipality (rate payers) for use of the incinerator or gasifier.

Despite there being no current examples in Australia, there is some experience. During the early 2000s, a municipal gasifier operated for a while at Whytes Gully near Wollongong. Furthermore, blast furnaces have been used as a waste plastic/waste oil incinerator where the plastic or waste oil offsets gas and coke used in the smelting of ore. 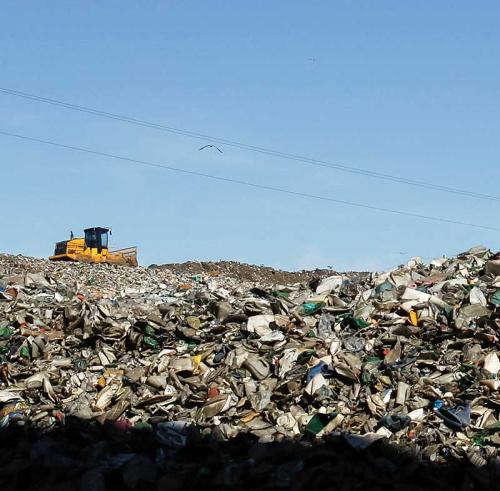 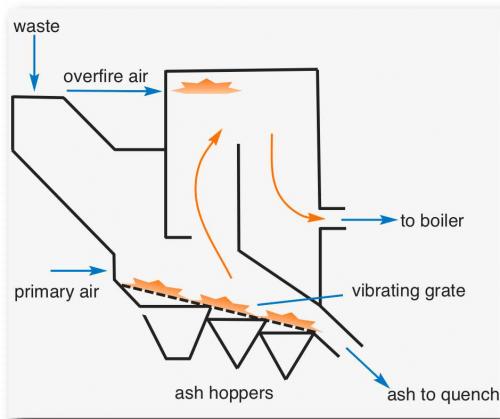 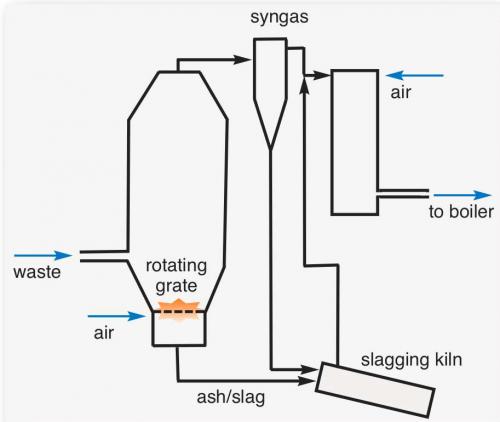 Fig 2. A gasifier for municipal waste.

Australia has not embraced industrial incineration of waste to any significant extent but the inability to export waste may soon force state and local authorities to evaluate the technology ...