Dr Peter Smith was a much loved and revered figure in the close-knit Tasmanian chemistry and science communities. A champion for the advancement of science, and a most generous yet unassuming philanthropist, Peter died on 2 July 2017, aged 93.

Peter was born 30 June 1924, an only child. Young Peter excelled at primary school and later studied at the Hobart Technical High School. Upon completion, he found employment, working as a laboratory assistant for an arc welding manufacturer (1940–6). During this time, he studied part-time in the evenings at the Hobart Technical College, achieving diplomas in both chemical engineering and metallurgy (1945), and ultimately a Diploma of Applied Chemistry (1948). He had appointments with the Australian Aluminium Production Commission (1946–7), Murex Australasia – Chemical and Metallurgical Laboratories (1947–51), and then as an examiner at the Australian Patents Office in Melbourne and Canberra (1951–2).

He returned to Hobart, taking up a position as laboratory demonstrator in chemistry at the University of Tasmania in 1952, studying part-time for a BSc (awarded 1956, Honours 1957). Granted leave, he enrolled for his PhD at University College London, supported by a Du Pont Scholarship. Working under the supervision of Professor R.S. Nyholm, Peter was awarded his PhD in 1962 for his work entitled ‘Aspects of the chemistry of molybdenum halides’. This interest in molybdenum chemistry stayed with him throughout his career.

Returning to the University of Tasmania, Peter progressed from lecturer (1962) to senior lecturer (1966) and ultimately reader (1971), serving for a time as Acting Chemistry Department Head (1981–2). Peter was a committed teacher, with responsibilities typically focusing around his expertise in classical inorganic and solid state chemistry. However, he was also innovative and forward thinking, modernising the curriculum in the inorganic program, as well as introducing new emerging topics such as Analytical Chemistry, Industrial and Applied Chemistry, and Chemistry for Engineers.

His research was productive, with a focus on the chemistry of intermediate oxidation state compounds of molybdenum, chromium, tungsten, vanadium and titanium, with particular reference to preparative, structural, magnetic and spectroscopic properties of some halides and pseudo-halides. This work proved fruitful, with around 40 papers being published, stemming from his supervision of approximately 25 honours and PhD students. Recognising the importance of spectroscopy and instrumentation to university research, Peter was a key driver for the establishment of the Central Science Laboratory (1974).

Following his formal retirement in 1989, and with concerns about the future supply of scientists in Tasmania and Australia, Peter established his undergraduate scholarships in Physical Sciences at the University of Tasmania in 2002. A generous scholarship, Peter was at times supporting as many as 10 recipients. To date, approximately 30 students have benefited from Peter’s generosity and support.

Outside the university, Peter made many profound contributions to professional life in Tasmania. Foremost among these was his support for the RACI. Peter joined the Institute as a Student member in 1940 and rose to Fellowship in 1972. He was a former Branch Secretary, Vice-President and two times President in the 1960s and 1980s. He was awarded a National Citation for his contributions to the profession in 1988, and was an Honorary Life Member. It was a privilege for some members of the local Branch to celebrate with Peter on the occasion of his 75th year of membership recently.

Peter also contributed in many other areas. He was a Life Member of the RSC (joining 1957), an office bearer and Past President of The Royal Society of Tasmania, an Honorary Life Member of ANZAAS (joining 1942), a much loved and distinguished Emeritus Fellow at Jane Franklin Hall residential college, a Branch member and State Chair of AUSIMM (joining 1969), and Tasmanian delegate to national council of AINSE (1982–9).

In his later years, Peter’s many contributions were recognised and honoured through receipt of a University of Tasmania Distinguished Alumni Award (2005), an Honorary DSc (2011, coinciding with 50 years of Chemistry at the Sandy Bay campus), and in 2012 a Medal of the Order of Australia (OAM) ‘for services to science, education and philanthropy’.

Peter never married, but in numerous conversations made clear he was never lonely. The countless students that came under his tutelage, his many colleagues, and his vast array of friends were his ‘family’ whom he kept in close contact with. Deeply loyal, he valued each, and kept close tabs on the lives of countless many. In return, Peter was embraced, honoured and cherished into broader family circles.

Peter is fondly remembered and held in the highest esteem by Tasmanian chemists across many generations. What set him apart from other educators was his consistent, sincere interest in the welfare of those students he taught or was associated with. He knew names, knew where each came from, met families, and was interested in individual journeys. He gave encouragement and, when necessary, rebuke to help make each student work and study harder. He organised excursions to Tasmanian chemical industries, helped students find vacation employment, and demonstrated the importance of contributing to a professional society. He was generous with his time and resources, and genuinely cared for the wellbeing of all.

The Australian chemical landscape has changed with the passing of Peter Smith. However, he has left us an amazing example, and an amazing legacy. We are thankful for his life and contributions, ever proper, ever distinguished, ever a scholar. 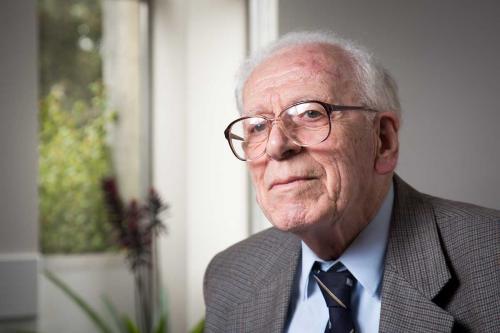 What set him apart from other educators was his consistent, sincere interest in the welfare of those students he taught or was associated with.