Situated about 200 kilometres south-west of Munich, the city of Lindau on Lake Constance borders Austria’s and Switzerland’s mountains. Lindau is the place where the concept of the Nobel Laureate Meeting began. With a vision to reconnect German scientists to researchers around the globe, two Lindau physicians, Franz Jarl Hein and Gustav Wilhelm Parade, and Count Lennart Bernadotte af Wisborg organised the first Lindau Nobel Laureate Meeting in 1951. Over the past 67 years the meeting has thrived to educate, inspire and connect more than 32 000 young researchers.

This year’s June meeting gathered 28 Nobel laureates and 420 young scientists from more than 70 countries. I was lucky to be one of the nine early career researchers in chemistry selected by the Australian Academy of Science, the Science and Industry Endowment Fund and the Lindau Council to represent Australia and discuss and develop ideas addressing pressing worldwide issues. Unlike other conferences that I have attended, the Lindau Meeting was set so as to maximise the interactions of young researchers with each other as well as with Nobel laureates. At the registration, I received my personalised one-week agenda packed with science breakfasts, lectures, discussion sessions, master classes, panel discussions and academic dinners.

The extraordinary week started off with the inspiring keynote address of Professor Steven Chu (James H. Clark Center, Stanford University) (delivered by Professor William Moerner, Department of Chemistry, Stanford University) on the effects of climate change and the need for scientists to work together as well as with the general public, the private sector and policymakers to remedy the aftermath of cumulative human-made carbon dioxide levels. The importance of uniting skills from diverse backgrounds to form an intergenerational network of multidisciplinary collaborators without borders was a recurring theme and the Lindau Nobel Laureate Meeting provided a perfect platform to do so.

Among the educative discussions addressing current research findings were opportunities to interact with industry researchers. On 28 June, I was invited to the Mars Incorporated sponsored Science Breakfast ‘The chemistry of food: flavor and beyond’ and the Academic Dinner ‘The chemistry of the gut microbiome’ – both key aspects of my research. The talk from Dr Anita Zaidi (director of Enteric and Diarrheal Diseases (EDD) program at the Bill and Melinda Gates Foundation) was a particular eye-opener. As a recent PhD graduate, I found being exposed to the process of transitioning from laboratory research to its implementation in larger societies, in Anita’s case working on eliminating children’s mortality from diarrhoeal diseases in low–middle income counties, inspiring and it demonstrated a real-world application with positive societal impact.

My favourite memorable experience of the meeting was during the Gala dinner organised by Mexico. I was seated next to Professor Johann Deisenhofer (Green Center for Systems Biology, Biophysics, University of Texas Southwestern Medical Center), who received the Nobel Prize in Chemistry in 1988 for the determination of the three-dimensional structure of a photosynthetic reaction centre. The conversation flowed smoothly, we shared insightful perspectives of secondary and tertiary STEM education and research across continents, equity, the increase in nationalism around the planet and (his observations on) how far we have come compared to 60 years ago. Johann’s lifelong experience was invaluable and although I didn’t realise it at that time, the conversation enhanced my knowledge of international research and encouraged me to think about present-day trends in mobility, collaboration and transparency in science.

When asked for advice, the Nobel laureates generously shared their experience through their scientific/life challenges, their boldness to try a project highly important but almost impossible to achieve and their perseverance to explain unexpected results. One of the most impactful take-home messages was Sir John Walker’s anecdote about the importance of mentors in the career development of a young scientist:

[Sanger] encouraged me, gave me space, he simply supported me, he didn’t tell me what to do, he didn’t suggest that I work in this particular area but through his interest in mitochondrial DNA I got interested in bio-energetics. It can be advantageous and helpful to have brilliant, helpful and sympathetic mentors. So do your best to find one.

The trip to the 67th Lindau Nobel Laureate Meeting was a rich experience that contributed to my career aspirations, research and personal life. Hearing firsthand from the Nobel laureates’ experience in science, the way they learned from their mistakes and their advice to young scientists were unique experiences and I encourage other young scientists to apply for and attend future Lindau Nobel Laureate meetings.

I would like to thank the Australian Academy of Science, the Science and Industry and Endowment Fund, the Robert Bosch Foundation and the Lindau Council for sponsoring my attendance to the 67th Lindau Nobel Laureate Meeting. A huge thank you to Maria Forsyth (our delegation leader), Michael Taylor, Siddulu Talapaneni, Vini Gautam, Andrew Giltrap, Joy Jiang, Matthew Norris, Joseph Richardson and Andrew White for making this journey a fun and memorable one.

The 67th Lindau Nobel Laureate Meeting was inaugurated in June in Lindau on the banks of Lake Constance in Germany. The guests, who hailed from approximately 80 countries, were welcomed by the President of the Council, Countess Bettina Bernadotte af Wisborg. In total, 28 Nobel laureates and 420 young scientists from around the world participated in this year’s meeting, which was dedicated to chemistry.

In her opening address, Countess Bernadotte exhorted scientists to be more politically active in this ‘post-truth era’. ‘Scientists cannot ignore what is happening in the world. Some rulers, and people, seem to feel threatened by progress and the fact-oriented power of science.’ With its focus on open and constructive dialogue, the Lindau meetings can act as the necessary antithesis of this ideology by encouraging young scientists to network with each other and to stand up for science.

The keynote speech by Steven Chu, Nobel Laureate and former US Secretary of Energy (2009–13) under Barack Obama, was read by Nobel Laureate William E. Moerner, because Chu had to cancel his attendance at short notice. The speech was dedicated to the devastating consequences of climate change, which cannot be ignored, and stressed the importance of evidence-based research for global climate policies. Chu criticised the proposed funding cuts to the budgets for both climate and clean energy research under US President Trump and made an impassioned plea for a rethink of humanity’s attitude to the clear dangers of climate change. ‘A changing climate does not respect national boundaries’, he stressed. Chu closed his speech with an appeal to the next generation of scientists in the audience: ‘I close my remarks by asking the young students gathering this week at the Lindau Nobel Laureate Meeting to consider joining the effort to combat climate change.’

Steven Chu and William Moerner were among the co-initiators of the Mainau Declaration on Climate Change during the 2015 Lindau Meeting. In addition to climate change and the role of science in a post-truth age, molecular machines are another of the core topics of the 67th Lindau Nobel Laureate Meeting. For the development of these microscopic structures, two of the participants at the Meeting, Bernard Feringa and Jean-Pierre Sauvage, received the Nobel Prize in Chemistry 2016 together with Sir Fraser Stoddart.

Federal Minister Johanna Wanka represented Germany at the inauguration – the Federal Ministry of Education and Research is among the biggest supporters of the Lindau Meetings. In her speech, the minister highlighted the special character of the meeting: ‘Above all, the discussions and the exchange between the generations – the laureates, the young researchers and students from many countries of the world – are what make this event unique’, said Wanka. She further stressed: ‘We need bright minds that foster advancement. That’s why we put special emphasis on strengthening science in Germany.’

The meeting ran until Friday, 30 June, giving the participating Nobel laureates and young scientists ample opportunity for lively, intellectual exchange. Numerous talks, discussions, master classes and, for the first time, so-called poster flashes, at which selected young scientists present their research in short talks, are on the program.

The meeting came to a close with a panel discussion on the theme of ethics in science. The panellists included Ahmet Üzümcü, Director-General of the Organisation for the Prohibition of Chemical Weapons (OPCW), who accepted the Nobel Peace Prize 2013 on behalf of the organisation. 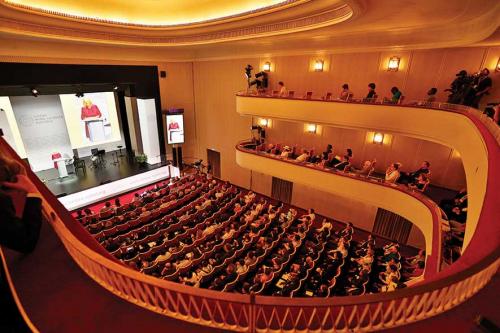 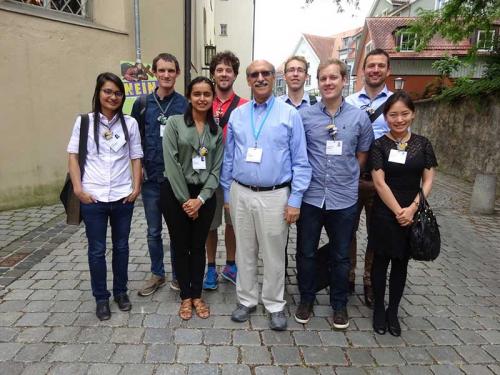 About the Lindau Nobel Laureate meetings 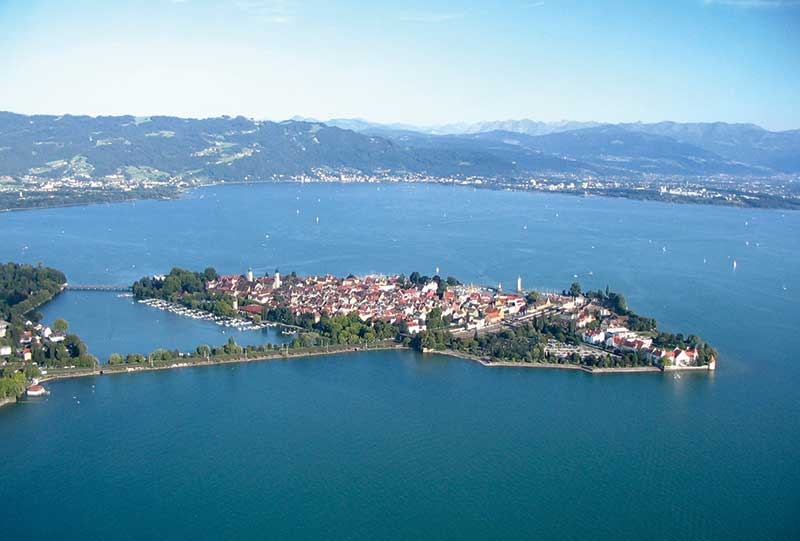 The Lindau Nobel Laureate Meetings have been hosted on the banks of Lake Constance every year since 1951. Owing to the ongoing renovation of the local conference hall, this year’s meeting again took place in Lindau’s city theatre. The number of participants was therefore reduced from the usual 600 to 450.

Once every year, about 30 Nobel Laureates convene at Lindau to meet the next generation of leading scientists: 400–500 undergraduates, PhD students, and postdoc researchers from all over the world. The Lindau Nobel Laureate Meetings foster the exchange among scientists of different generations, cultures, and disciplines.

The scientific program of each Lindau Meeting is based on the principle of dialogue. The different sessions – lectures, discussions, master classes and panel discussions – are designed to activate the exchange of knowledge, ideas, and experience between and among Nobel laureates and young scientists.