Physiology or Medicine: mechanisms of autophagy

The Nobel Assembly at Karolinska Institutet has awarded the 2016 Nobel Prize in Physiology or Medicine to Yoshinori Ohsumi, Tokyo Institute of Technology, Japan, ‘for his discoveries of mechanisms for autophagy.’

The word ‘autophagy’ originates from the Greek words auto-, meaning ‘self’, and phagein, meaning ‘to eat’. Thus, autophagy denotes ‘self-eating’. This concept emerged during the 1960s, when researchers first observed that the cell could destroy its own contents by enclosing it in membranes, forming sack-like vesicles that were transported to a recycling compartment, called the lysosome, for degradation. Difficulties in studying the phenomenon meant that little was known until, in a series of brilliant experiments in the early 1990s, Yoshinori Ohsumi used baker’s yeast to identify genes essential for autophagy. He then went on to elucidate the underlying mechanisms for autophagy in yeast and showed that similar sophisticated machinery is used in our cells.

Ohsumi’s discoveries led to a new paradigm in our understanding of how the cell recycles its contents. His discoveries opened the path to understanding the fundamental importance of autophagy in many physiological processes, such as in the adaptation to starvation or response to infection. Mutations in autophagy genes can cause disease, and the autophagic process is involved in several conditions, including cancer and neurological disease.

In the mid 1950s, scientists observed a new specialised cellular compartment, called an organelle, containing enzymes that digest proteins, carbohydrates and lipids. This specialised compartment is referred to as a ‘lysosome’ and functions as a workstation for degradation of cellular constituents. The Belgian scientist Christian de Duve was awarded the Nobel Prize in Physiology or Medicine in 1974 for the discovery of the lysosome. New observations during the 1960s showed that large amounts of cellular content, and even whole organelles, could sometimes be found inside lysosomes. The cell therefore appeared to have a strategy for delivering large cargo to the lysosome. Further biochemical and microscopic analysis revealed a new type of vesicle transporting cellular cargo to the lysosome for degradation. Christian de Duve, the scientist behind the discovery of the lysosome, coined the term ‘autophagy’ to describe this process. The new vesicles were named autophagosomes.

During the 1970s and 1980s, researchers focused on elucidating another system used to degrade proteins, namely the ‘proteasome’. Within this research field, Aaron Ciechanover, Avram Hershko and Irwin Rose were awarded the 2004 Nobel Prize in Chemistry for ‘the discovery of ubiquitin-mediated protein degradation’. The proteasome efficiently degrades proteins one by one, but this mechanism did not explain how the cell got rid of larger protein complexes and worn-out organelles. Could the process of autophagy be the answer and, if so, what were the mechanisms?

Yoshinori Ohsumi had been active in various research areas, but upon starting his own lab in 1988, he focused his efforts on protein degradation in the vacuole, an organelle that corresponds to the lysosome in human cells. Yeast cells are relatively easy to study and consequently they are often used as a model for human cells. They are particularly useful for the identification of genes that are important in complex cellular pathways. But Ohsumi faced a major challenge: yeast cells are small and their inner structures are not easily distinguished under the microscope and thus he was uncertain whether autophagy even existed in this organism. Ohsumi reasoned that if he could disrupt the degradation process in the vacuole while the process of autophagy was active, then autophagosomes should accumulate within the vacuole and become visible under the microscope. He therefore cultured mutated yeast lacking vacuolar degradation enzymes and simultaneously stimulated autophagy by starving the cells. The results were striking. Within hours, the vacuoles were filled with small vesicles that had not been degraded. The vesicles were autophagosomes and Ohsumi’s experiment proved that autophagy exists in yeast cells. But even more importantly, he now had a method to identify and characterise key genes involved in this process. This was a major breakthrough and Ohsumi published the results in 1992.

Ohsumi now took advantage of his engineered yeast strains in which autophagosomes accumulated during starvation. This accumulation should not occur if genes important for autophagy were inactivated. Ohsumi exposed the yeast cells to a chemical that randomly introduced mutations in many genes, and then he induced autophagy. His strategy worked. Within a year of his discovery of autophagy in yeast, Ohsumi had identified the first genes essential for autophagy. In his subsequent series of elegant studies, the proteins encoded by these genes were functionally characterised. The results showed that autophagy is controlled by a cascade of proteins and protein complexes, each regulating a distinct stage of autophagosome initiation and formation.

After the identification of the machinery for autophagy in yeast, a key question remained. Was there a corresponding mechanism to control this process in other organisms? Soon it became clear that virtually identical mechanisms operate in our own cells. The research tools required to investigate the importance of autophagy in humans were now available.

Thanks to Ohsumi and others following in his footsteps, we now know that autophagy controls important physiological functions where cellular components need to be degraded and recycled. Autophagy can rapidly provide fuel for energy and building blocks for renewal of cellular components, and is therefore essential for the cellular response to starvation and other types of stress. After infection, autophagy can eliminate invading intracellular bacteria and viruses. Autophagy contributes to embryo development and cell differentiation. Cells also use autophagy to eliminate damaged proteins and organelles, a quality control mechanism that is critical for counteracting the negative consequences of ageing.

Disrupted autophagy has been linked to Parkinson’s disease, type 2 diabetes and other disorders that appear in the elderly. Mutations in autophagy genes can cause genetic disease. Disturbances in the autophagic machinery have also been linked to cancer. Intense research is now ongoing to develop drugs that can target autophagy in various diseases.

Autophagy has been known for over 50 years but its fundamental importance in physiology and medicine was only recognised after Yoshinori Ohsumi’s paradigm-shifting research in the 1990s. For his discoveries, he is awarded this year’s Nobel Prize in Physiology or Medicine.

This year’s laureates opened the door on an unknown world where matter can assume strange states. They have used advanced mathematical methods to study unusual phases of matter, such as superconductors, superfluids and thin magnetic films. Thanks to their pioneering work, the hunt is now on for new and exotic phases of matter. Many people are hopeful of future applications in both materials science and electronics.

The three laureates’ use of topological concepts in physics was decisive for their discoveries. Topology is a branch of mathematics that describes properties that only change step-wise. Using topology as a tool, they were able to astound the experts. In the early 1970s, Michael Kosterlitz and David Thouless overturned the then current theory that superconductivity or suprafluidity could not occur in thin layers. They demonstrated that superconductivity could occur at low temperatures and also explained the mechanism, phase transition, that makes superconductivity disappear at higher temperatures.

In the 1980s, Thouless was able to explain a previous experiment with very thin electrically conducting layers in which conductance was precisely measured as integer steps. He showed that these integers were topological in their nature. At around the same time, Duncan Haldane discovered how topological concepts can be used to understand the properties of chains of small magnets found in some materials.

We now know of many topological phases, not only in thin layers and threads, but also in ordinary three-dimensional materials. Over the last decade, this area has boosted frontline research in condensed matter physics, not least because of the hope that topological materials could be used in new generations of electronics and superconductors, or in future quantum computers. Current research is revealing the secrets of matter in the exotic worlds discovered by this year’s Nobel laureates.

The Nobel Prize in Chemistry 2016 was awarded jointly to Jean-Pierre Sauvage (University of Strasbourg, France), Sir J. Fraser Stoddart (Northwestern University, USA) and Bernard L. Feringa (University of Groningen, the Netherlands) ‘for the design and synthesis of molecular machines’. These laureates and their work will be featured in Chemistry in Australia early in 2017.

David J. Thouless was born in 1934 in Bearsden, UK. He has a PhD (1958) from Cornell University, USA. He is Emeritus Professor at the University of Washington, USA.

F. Duncan M. Haldane was born in 1951 in London, UK. He has a PhD (1978) from Cambridge University, UK. He is the Eugene Higgins Professor of Physics at Princeton University, USA.

J. Michael Kosterlitz was born in 1942 in Aberdeen, UK. He has a PhD (1969) from Oxford University, UK. He is the Harrison E. Farnsworth Professor of Physics at Brown University, USA.

Sir J. Fraser Stoddart was born in 1942 in Edinburgh, UK. He has a PhD from Edinburgh University (1966.) He is at Northwestern University, USA. 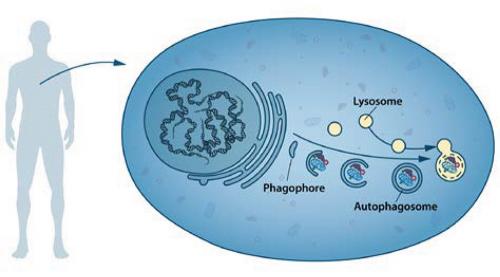 Our cells have different specialised compartments. Lysosomes constitute one such compartment and contain enzymes for digestion of cellular contents. A new type of vesicle called an autophagosome was observed within the cell. As the autophagosome forms, it engulfs cellular contents such as damaged proteins and organelles. Finally, it fuses with the lysosome, where the contents are degraded into smaller constituents. This process provides the cell with nutrients and building blocks for renewal.

Ohsumi studied the function of the proteins encoded by key autophagy genes. He delineated how stress signals initiate autophagy and the mechanism by which proteins and protein complexes promote distinct stages of autophagosome formation. 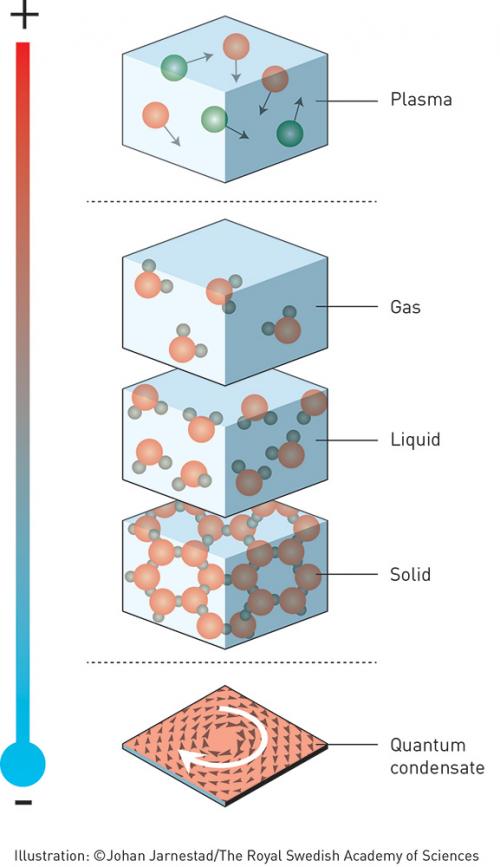