An international convention for managing ships’ ballast water to prevent the arrival of invasive marine species is about to come into force.

The diversity of marine ecosystems evolved, not just by the physico-chemical characteristics of regional water bodies, but also by the biogeographic isolation of coasts by oceans and seas. From the time mariners first set to sea, their vessels became a vector for the global distribution of species, both intentionally, for example food crops and domestic animals, and accidentally, for example terrestrial weeds and rodents. Introductions of alien species in the marine environment are often less obvious, but ships have facilitated the movement of species for centuries. A survey of alien marine species in Port Phillip Bay, Victoria, in 1999 documented 160 species considered likely to be alien, which represented 13% of the known marine flora and fauna in the bay.

Although some marine aliens were known to have been in Australia since gold rush times, the evidence suggested a new pulse of arrivals in the latter decades of the 20th century. Of particular concern in the 1990s was the arrival and rapid population growth of a number of species, including the Northern Pacific seastar (Asterias amurensis) in Hobart’s Derwent River and Port Phillip Bay, the Asian kelp (Undaria pinnatifida) in southeastern Tasmania and Port Phillip Bay, and the black-striped mussel (Mytilopsis sallei) in Darwin Harbour. There were also concerns about the movement of toxic dinoflagellates – microalgae that can bloom to cause ‘red tides’ that can lead to paralytic shellfish poisoning from eating mussels and oysters that have fed on these algae.

Ballast is used in ships to provide stability and to compensate for weight changes in cargo loads, and from fuel and water consumption. In the days of sail, rocks collected from seashores were commonly used as ballast but, with the introduction of steel-hulled ships, ballast tanks for holding seawater ballast became the norm. Ballast water is taken aboard as ships unload, and discharged as ships load. With Australia’s trading patterns, bulk carriers that export raw materials such as coal, iron ore, oil and gas would discharge ballast in the Australian ports of call, and container ships and vehicle carriers that import manufactured goods would take up ballast prior to departure.

In the late 1980s, Australia, together with Canada, raised concerns on ballast water at the International Maritime Organization (IMO) Marine Environment Protection Committee and, in 1991, the committee adopted the non-mandatory International Guidelines for preventing the introduction of unwanted aquatic organism and pathogens from ships’ ballast water and sediment discharges. Continued review of the issue consequently led the IMO to adopt the legally binding International Convention for the Control and Management of Ships’ Ballast Water and Sediments (‘the BWM Convention’) on 13 February 2004.

As with all IMO conventions, entry-into-force of the BWM Convention would be 12 months after a required minimum number of IMO Member States ratified the Convention and, for this Convention, the requirement was not less than 30 States, the combined merchant fleets of which constituted not less than 35% of the gross tonnage of the world’s merchant shipping. Acceptance of the convention by States was slow, and the requirement was only met in September 2016, so the date for entry-into-force of the convention is 8 September 2017. However, it should be noted that ballast water discharge from international ships arriving in Australian ports has been managed since 2001 under the Australian Ballast Water Management Requirements that require deep ocean ballast water exchange.

Meeting the D-2 standard for ballast water treatment systems (BWTS) is challenging because of factors including the range of organisms to be rendered non-viable, the volume of water to be treated, the water chemistry and quality, which may encompass salinity ranges from freshwater to fully marine and high water turbidity, and that the standard is a discharge standard, meaning that organisms are not able to regrow in the tanks during the voyage. The IMO requires that a commercially developed BWTS is approved by a flag administration in accord with IMO guidelines that require land-based testing ship-board trials and, for systems using active substances, approval of environmental impact of discharged ballast water by the Marine Environment Protection Committee. At the end of 2016, some 68 systems had received type approval certification in line with IMO requirements, 30 of which made use of active substances.

Treatment systems generally include a two-stage process: physical solid–liquid separation to separate suspended solid material, including larger organisms from the intake water, then disinfection to kill or inactivate microorganisms.

The physical solid–liquid separation phase can employ hydrocyclone separation or surface filtration, sometimes with upstream addition of chemical flocculants or coagulants to increase the efficiency of particle separation. Filtration systems can use discs or fixed screens with automatic backwashing. The hydrocyclone system of high-velocity centrifugal rotation can be more effective than filtration.

Disinfection can involve physical methods, or the addition or generation of active substances. Physical methods include UV irradiation, cavitation, deoxygenation and heat. UV irradiation is a widely used method for industrial and municipal water treatment. A technological challenge for UV application was the need for water clarity to enable UV penetration through the full treatment pipe or vessel diameter. However, this has been overcome in the development of some systems through effective filtration of water prior to the disinfection stage. Ballast water can also be passed though the reactor during deballasting, but without the need for filtration, to kill any organisms that may have regrown during the voyage.

Deoxygenation of the water will kill organisms within several days, but there is a heightened risk of anaerobic corrosion of tank walls by sulfate-reducing bacteria, the human health risk of the deoxygenated tank head space if hatches are opened, and the environmental risk from the release of large volumes of deoxygenated water into a recipient water body. Cavitation, generated ultrasonically or by gas injection, disrupts organism cell walls but has been found to require additional treatment systems downstream for total efficacy. Heat has limitations in the requirement for the lethal temperature to be maintained over an extended period of time and the risks that sub-lethal temperatures could enhance bacterial growth.

Chemical disinfection using oxidising biocides is the other widely used approach, with different systems using chlorination, electrochlorination, chlorine dioxide, ozonation, paracetic acid and/or hydrogen peroxide. As is the case for UV radiation, chlorination systems are widely used for the treatment of municipal and industrial waters. In natural waters, the biocidal effect is achieved by a sodium hypochlorite solution producing different oxidising compounds. Free chlorine, or free available chlorine, is present as an equilibrium mixture of hypochlorous acid and hypochlorite ions, which are both oxidants, but the latter is far less effective than the former. For ballast water treatment, sodium hypochlorite can be generated electrochemically directly from seawater or, in freshwater or low salinity waters, from stored brine.

A drawback of both chlorination and ozonation systems is the formation of by-products that can include halogenated methanes, hydrocarbons, amines, acetonitriles etc. The risks of residual oxidants in discharge ballast water causing environmental damage in the receiving waters can require neutralisation of residual chemicals prior to discharge, which can be achieved, for example, by dosing with sodium bisulfate.

An added complication for the installation of a BWTS is that the US Coast Guard has set more stringent standards than the IMO on the performance of a BWTS and US-type approval of systems is required for ships operating in US waters. The US Coast Guard regulations require compliance at the first dry-docking after 1 January 2016 and at delivery for new builds. However, the first US-type approval of a BWTS was not issued until December 2016 and only two more systems have been approved since.

With entry-into-force of the BWM Convention, ships not already fitted with a ballast water treatment system will be required to do so by 2021. Estimates of the number of ships needing retrofit BWTS installations over the next five years vary from 35 000 to 120 000 ships. One calculation based on the lower number, and an estimate that there are 250 shipyards worldwide capable of doing the work, results in each yard having to install a system every 16 days. Installation of a BWTS can cost up to US$5 million per ship. 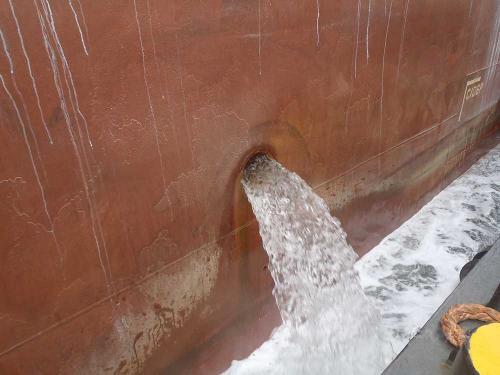 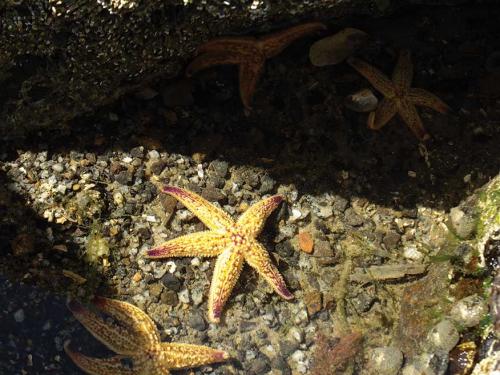 The Northern Pacific seastar (Asterias amurensis) arrived in Australia in the 1990s and quickly established itself. 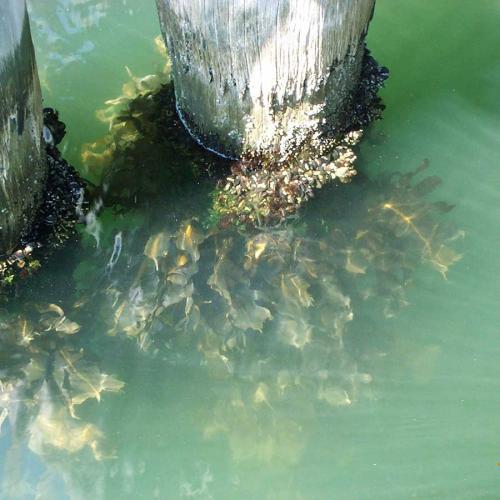 Asian kelp (Undaria pinnatifida) arrived in Australia in the 1990s and quickly established itself. 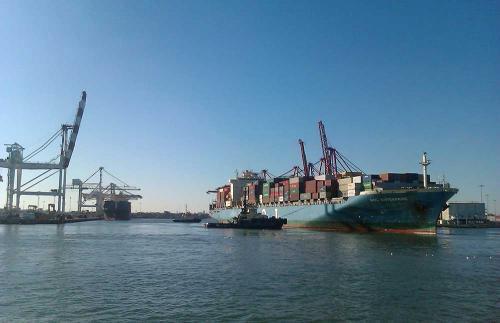 A container ship berthing at Swanston Dock in the Port of Melbourne. Ballast water, and sometimes unwanted marine species, are discharged from a ship as it loads. 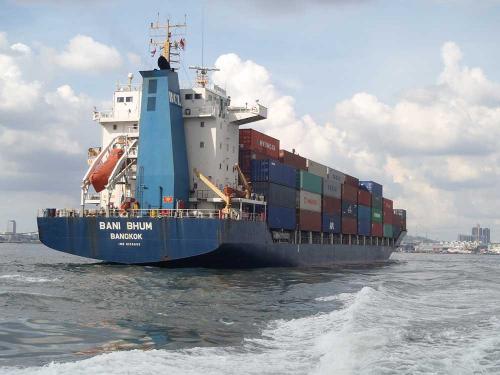 A small container ship under way off Singapore. Singapore is the second largest container port in the world (behind Shanghai), and Melbourne is the largest in Australia.

Ballast water is taken aboard as ships unload, and discharged as ships load.