According to the UN Food and Agricultural Organization, around 1.3 billion tonnes of food waste were discarded globally in 2011. This number is predicted to reach around 2.2 billion tonnes by 2025. In Australia, an estimated 35% and 21.5% of municipal and industrial waste, respectively, is food. Australia rejects an estimated 4.06 million tonnes of food with a total annual value of $8.04 billion. Currently, food waste represents the single largest type of waste entering landfills. These wastes contribute to major environmental, economic and social problems.The environmental impact of food waste is twofold: depletion of natural resources such as water and nutrients used for the production of food, and environmental costs associated with the safe disposal of food waste.

Waste and loss of food happens throughout food supply chains – it begins before a product even leaves the farm gate. Food losses can occur before, during or after harvest. Pre-harvest losses can be due to weather extremes (i.e. droughts) or pest infestations. Examples of food waste are perishable commodities damaged during storage and transport, and food products prepared by restaurants and community facilities such as hospitals that are never consumed. Food waste is also a principal constituent of the household waste stream, contributing to a significant fraction (globally around 20%) of domestic waste. More consumer choices of food products and an increasing share of disposable income disbursed on food are manifest as wasteful behaviour at the consumer end of the food supply chain.

The second approach, value-added utilisation (valorisation) technologies of non-preventable food waste, can be achieved by bio-refining food-waste streams for the production of value-added speciality products. These include chemicals and biofuels; developing waste-specific processing technologies and schemes; and encouraging re-utilisation of food-waste-derived products. A number of prevention and mitigation measures including legislation have already been implemented to reduce food waste. However, technologies for the valorisation approach are urgently needed.

Current waste management/recycling practices for food waste include animal feed, composting, combustion (i.e. incineration) and landfill. Production of animal feed food waste is generally considered to be the most cost-effective method for beneficial utilisation of these wastes; however, it is sometimes limited by the nature and volume of the co-product derived in the process. Composting involving anaerobic digestion followed by land spreading or soil injection is considered environmentally friendly and reduces farmers’ needs for fertilisers. In contrast, not only does combustion of food wastes result in greenhouse gas emission, but the energy recovery through incineration is not always economically feasible, mainly because of the energy required to evaporate the high volume of water in these wastes. Landfill is becoming increasingly prohibitive, and the damage this triggers encompasses more than just occupying space at landfill sites and leachate generation, with food wastes generating an estimated 6.8 million tonnes of greenhouse gases such as carbon dioxide and methane into the atmosphere in Australia.

Food waste is becoming a sustainable resource with a significant potential to be utilised as a feedstock material for the synthesis of fuels, chemicals and biomaterials, given the presence of diverse functionalised chemical components (i.e. carbohydrates, proteins, fatty acids, polyphenolics). However, when using food wastes as a feedstock for electricity power generation (i.e. through anaerobic digestion) or fuel generation (i.e. conversion of cellulosic biomass to bioethanol), part of the chemical components are lost and/or underutilised. An array of valuable chemicals can be synthesised from food wastes (see table). The average value of bulk chemicals, transportation fuels and animal feed produced from food wastes is estimated to be around $1000, $200–400 and $70–200 per tonne of biomass, respectively, which highlights the significant differences in economic value between final products derived from food wastes.

Food loss can occur during the production or processing of food. Food waste is generating during food distribution, and food use in commercial and domestic settings.

At the University of Newcastle, our environmental chemistry group, in collaboration with Hong Kong Polytechnic University (Associate Professor Dan Tsang), is looking at the potential value of food waste as a feedstock source for the production of methane (CH4) for energy and fertiliser for agricultural production.

It has been demonstrated that a number of chemicals, including sugars (e.g. sucrose), organic acids (lactic acid), pectin, polysaccharide, polyphenols and fatty acids, can be synthesised from specific food wastes (see table). However, currently ethanol and biodiesel are the two major chemicals produced on a commercial scale from general food waste. These two chemicals are used as biofuels mainly in the transport sector. During the production of these two major chemicals from food wastes, other secondary chemicals are also generated. For example, biodiesel production from food waste is likely to generate about 10% (w/w) glycerol as one of the main by-products. It was estimated that the global biodiesel demand would reach 170 billion litres by 2020, which indicates that approximately 17 billion litres of crude glycerol would be generated as a co-product. Because purified glycerol is a high-value commercial chemical with many applications, the crude glycerol provides great potential benefits for new applications, including the synthesis of secondary chemicals such as 1,3-propanediol, which is used as a building block in the production of polymers.

Strategies to utilise food wastes, such as animal feeding and composting, cannot achieve an abundant processing of food waste residues. In this regard, advanced food wastes utilisation practices aiming to achieve sustainable development should focus on technologies that convert these waste resources into value-added products. These include integrated green chemistry technologies involving biochemical processes to synthesise value-added chemicals and biofuel precursors, and extractive processes for the bio-recovery of valuable compounds such as antioxidants.

The diversity of functionalised chemical components found in food wastes reflects the range of chemical industry sectors that can use such a renewable feedstock, thereby increasing the sustainability of their processes. Through the increased utilisation of food waste for non-food applications, such as synthesis of chemicals, the public perception about food waste will change, thereby helping to create the renewable supply chains required to achieve for a closed-loop economy. 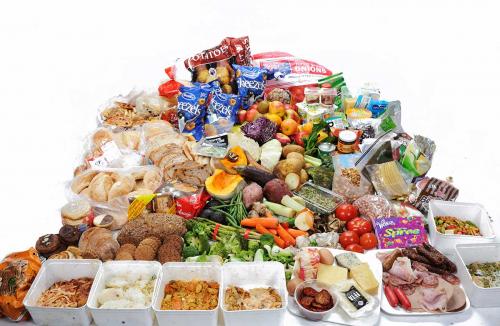 Food waste is becoming a sustainable resource with a significant potential to be utilised as a feedstock material for the synthesis of fuels, chemicals and biomaterials ...

The biomass from food wastes provides a major source of building block chemicals.