Perhaps that’s unfair to hydrogen, much as it is to vanilla, an incredibly complex – and expensive – flavour. I mean no offence, however, to the element that makes up nearly 75% of all baryonic mass and 10% of my own body. In fact, the deceiving simplicity of the hydrogen atom is what gives it its charm. There’s a reason, after all, that it’s one of the first elements we teach students about.

One proton, one electron. The electron, a tiny negative particle, orbits the proton, a much larger positive particle. That’s a description of most hydrogen atoms, but also a brilliant starting point for all discussion about the physical sciences, especially chemistry. It raises the questions: ‘What if there were more protons or electrons?’, ‘Why are they both charged?’, ‘Why is one larger than the other?’ and ‘Wait, did you say “most” hydrogen atoms?’.

By starting with a simple doodle of a small dot on a circle around the large dot, we can learn what an atom is, what a proton is, and what an electron is. If we add another large dot, we can learn about neutrons and isotopes. If we add an additional two large dots and a second small dot, we discover helium, which leads us to understand other elements, noble gases and nuclear fusion. Beginning only with a quick representation of hydrogen allows us to learn or teach almost anything about chemistry; it is the seed from which so much knowledge is drawn.

So then, why do I think of hydrogen when I struggle with any problem? How does it help me write when I’m unmotivated, or decide on what to have for dinner? Ultimately, it’s about what hydrogen represents: a starting point. Every essay begins with a letter, which becomes a word, which becomes a sentence. Every mountain climb begins with a single step, and each two-metre-long sandwich sub with a single bite.

And everything we know about chemistry begins with two dots and a circle, so you might as well start somewhere.

As a PhD student at Monash University, Joshua Marlow looks at how nanoparticles affect the properties of liquid crystals. Just like liquid crystals, which behave as both solids and liquids, Josh dreams of being both a scientist and a communicator. He hopes to help scientists convey their work to wider audiences, and to help non-scientists experience the wonders of the scientific world. 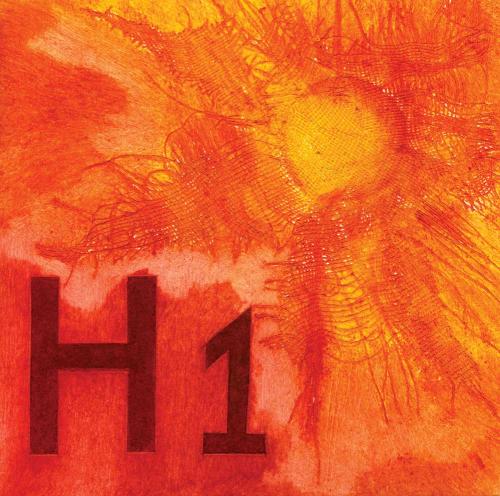