The great claw of crabs lends its Greek name, via Latin, to a group of chemicals called chelates. Chelates hold a central metal in a claw-like embrace. The strength of the embrace is measured by a stability constant. The larger its value, the more tenacious the hold.

In the 1960s, Sydney University chemists, inorganic Frank Dwyer and organic Francis Lions, collaborated. Francis made the chelates ‘in tank car lots’ and Frank then wrapped them around metal ions.

Wrapping metal ions prevents them from grabbing a negative ion and precipitating as a solid out of a solution. It also prevents these ions from taking part in reactions involving catalysts. Bottom line – the chelate must have a stronger hold on the ion than undesirable competitors.

Chelates are useful in many everyday products in the laundry, in the kitchen, in the medicine cabinet, on the cosmetic counter, and out in the garden. Industrial use is huge and varied.

For laundering, chelates include polyphosphates, citrates and EDTA (ethylenediamine tetraacetic acid) and modifications thereof. They hold the ions in hard water (calcium, magnesium and iron) to prevent precipitating soap and interfering with detergents.

Citric acid (naturally in lemon juice and also a food additive) can chelate iron. Hence, it is useful for removing bloodstains after their colour has changed from blood red to rusty, indicating that the natural, very stable chelate haem has degraded. It is good for ordinary rust stains as well.

Kettle surfaces calcified by the boiling of hard water can be cleaned with citric acid to chelate away the calcium salts (watch at bit.ly/2YzLpy2).

Food Standards Australia and New Zealand (FSANZ) allows calcium disodium EDTA as an additive (385) in some foods where it can remove those metals with higher stability constants. It is added to mayonnaise and salad dressings where metals such as copper, iron and manganese catalyse the production of rancid tastes and odours. The large surface area of the dispersed oil–water interface makes it particularly vulnerable compared to bulk oil.

EDTA also prevents off-colours occurring when cooking kidney beans, black-eyed peas and chickpeas. The metal-catalysing ions can come from the cooking water or the legume itself. Unless, of course, you prefer mushy red-grey kidney beans.

The earliest deliberate medical search for a metal chelating agent was possibly for an antidote to the arsenical poison gas lewisite. British biochemist Sir Rudolph Peters developed BAL (British anti-Lewisite (dimercaprol)) in 1940–5 . In the event, this gas was never used in World War II, but the research led to further medical developments in chelation control of metals in the body. EDTA chelation therapy is now widely administered for lead and other heavy metal poisoning (bit.ly/2WYrzvM).

EDTA is in eye drops and contact lens wetting and cleaning solutions. Its role here is subtle. It deals with certain types of bacteria, particularly Pseudomonas species. Some are more difficult to destroy because they have an added encapsulating cell wall that slows the entry of preservatives and reduces resistance to them. EDTA removes calcium and magnesium ions that maintain the structure of this capsule, which then disintegrates.

Chelated iron is a cheap way of treating malnutrition, particularly in the developing world. It is added to maize (corn) flour. In contrast, powdered iron alters the flour’s colour, taste and shelf life. Non-chelated soluble iron compounds (such as iron citrate) precipitate in the small intestine (at a pH above 3.5) and consequently are not efficiently absorbed.

EDTA-chelated iron survives the stomach’s low pH and is steadily released in the small intestine. FSANZ permits ferric sodium EDTA in some foods.

Shampoos and liquid soaps have the same problem with bacteria and thus the same approach is used to deal with them. There is also another reason. Traces of the usual suspect metals can catalyse the auto-oxidation of some perfume components.

EDTA also seems to stabilise colour, thickeners and proteins during storage. It is added to cosmetic creams for the same reason as it is put in salad dressing: to protect the large surface of oil-soluble components exposed in cosmetic emulsions.

Without chelates, fertilisers have a problem. Plants require trace elements (iron, zinc, copper and manganese) as well as macro amounts of phosphorus, usually in the form of orthophosphate. Orthophosphates immediately precipitate iron, zinc, copper and manganese as insoluble phosphates and make these trace elements unavailable.

Chelation also has many applications in industries other than those that are directly consumer orientated. You might like to check out a useful commercial website (chelates.nouryon.com/products/guide) for examples.

Meanwhile, raise your glass to crabby chemicals and propose a toast with an EDTA-chelated wine (bit.ly/2HwsyhB). 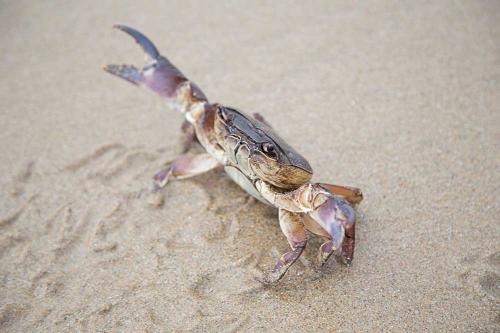 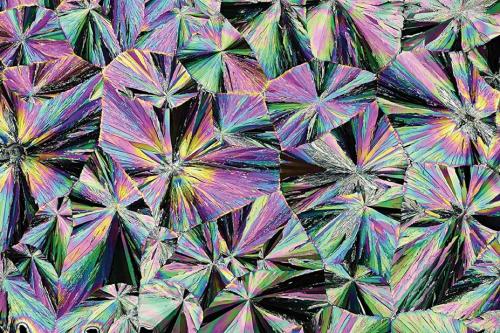 Crystals of citric acid, a common food preservative that can be used to chelate calcium. 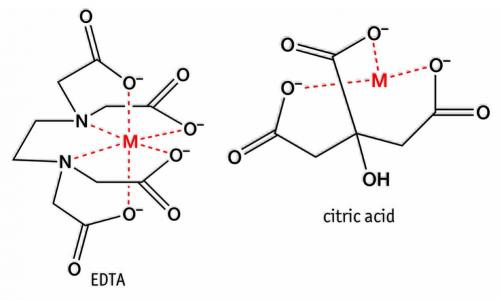 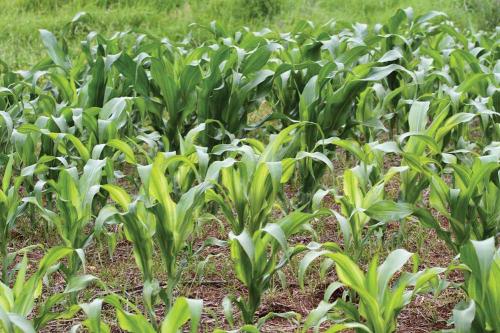 The maize plants in the foreground have a pronounced zinc deficiency. This is a common deficiency in crops and pastures globally.