I'd like to report a few observations on the future of transport gleaned from two international conferences and other meetings I have attended over the European summer.

Power to Fuel (PtX) is now a major research topic in Germany. The basic concept is that hydrogen is produced by electrolysis from renewable energy and this is used to reduce carbon dioxide to fuels; this can be by reduction to methane (synthetic natural gas) or by variations on the Fischer–Tropsch synthesis to fuels. PtX has many variants and, as yet, it is not clear what the optimum system is likely to be.

What is becoming clear is that for any system generating hydrogen by electrolysis, to avoid the high compression costs it will be necessary to produce hydrogen in high-pressure electrolysers. To avoid distribution problems, retail forecourt electrolysers can then deliver high-pressure hydrogen for fuel cell or hydrogen-powered vehicles. Several demonstration filling stations have been built and more are planned, including one in Canberra.

Another way to get around the hydrogen distribution problems (high-pressure pipelines, high compression costs, high leakage rates) is to use ammonia as an intermediate, a concept being pursued by CSIRO (see box). Ammonia is similar to LPG for which there is already an installed distribution infrastructure. The system would require the synthesis of ammonia at the source of the hydrogen, transportation by tanker to a retail forecourt (say) and there cracking back into hydrogen and nitrogen, which are separated by using advanced membranes to generate pure hydrogen for use.

The promotion of electric vehicles continues apace. However, apart from a few moneyed enthusiasts, electric vehicle sales are driven by spending other peoples’ money (taxpayers, shareholders etc.). I was told by one enthusiast that not only is careful planning required on a long journey so that the vehicle can be recharged, but also the present state of distribution makes it necessary to check ahead that the charging point is actually connected to the grid and is working. There are charging stations in most UK motorway service areas but my observation is that they are presently rarely used outside the London area.

There seems to be a marked reluctance to grapple with the issue of power provision, power distribution and the upgrading of power transmission that would be required for a widespread transition to electric vehicles. The only answer to the generation of sufficient power at the present time is a massive expansion of nuclear power, which seems to be off the agenda in most countries. Perhaps this problem has changed the UK government’s initiative to ban conventional fuelled vehicles from 2040 from being a definitive target to being an aspirational target.

However, there is a great deal of enthusiasm to fund battery research, which, together with quantum computing, is receiving a significant funding boost in the UK.

There is also a major push to use agricultural crops and waste for producing sustainable fuels. One of the more significant methods is to use pyrolysis or gasification to generate fuel gases. However, these routes, in general, produce unstable tarry by-products that are generally difficult to handle and convert into useful products. A new pyrolysis method is being demonstrated by Shell in Bangalore, India, which converts sawdust into energy without producing tars. The basic process, which was developed by the Gas Technology Institute (GTI) in the US, is to conduct the pyrolysis in two stages in the presence of high-pressure hydrogen and hydro-conversion catalysts. The first stage at high temperature de-oxygenates the biomass and produces a product that contains much less tarry matter; a second, lower temperature stage, cracks and reduces heavy hydrocarbons to gaseous products, gasoline and diesel fuel. The process is tailored to give a gaseous product rich in water and carbon monoxide, rather than carbon dioxide. Water is condensed and the carbon monoxide is passed to a reformer to produce hydrogen for the system. it is claimed that the system is balanced and no additional imported hydrogen is required.

One of the emerging issues with the top-down promotion of new energy sources for power generation and transport is that many people expect new and affordable technology to be deliverable within the next few years. For most technology breakthroughs that are required, such as batteries that can compete with diesel fuel on an energy density basis or cheap hydrogen supply or driverless vehicles, these developments are years if not decades away. This will lead to an ‘expectation gap’ by the general public. Failure to deliver in a timely fashion leads to disenchantment, which ultimately leads to lower funding of research in these areas; compare this with the once highly funded research into nuclear fusion for power generation.

Another interesting event in the recent British summer was concern about the shortage of carbon dioxide for beer (mainly fizzy lager) and food (crumpets) production. This is an example of the law of unintended consequences. The shortage has been caused by the simultaneous shutdown of several of the UK’s ammonia plants, which produce food-grade carbon dioxide as a by-product. The principal use for ammonia is for the production of fertiliser and manufacturing operations generally target shut-down and maintenance for the summer months because demand for fertiliser is generally low in this season. This year, several major ammonia facilities have been shut-down for an extended maintenance period. Several German fertiliser operations have also entered into maintenance shut-down, which has exacerbated the problem.

Fortunately, Australia can source carbon dioxide from natural gas as well as ammonia plants. However, as Australia moves to further decarbonise its economy and use more imported gas (LNG) and coal seam gas, which are both devoid of carbon dioxide, then in future we risk a similar shortage of carbon dioxide for the food industry.

A disturbing report has emerged that the concentration of the chlorofluorocarbon CFC-11 (trichlorofluoromethane) has increased in the atmosphere. This is despite it being banned by the Montreal Protocol, which aims to eliminate such compounds, because under UV light they destroy the ozone layer in the upper atmosphere. The source of the emission appears to be Chinese producers of urethane foam rubbers and the like, who should be targeted for sanction. However, industrial fluorine chemistry is not simple and CFC users would probably not be the producers. The question to be asked is who is making these compounds in defiance of the Protocol and what other CFCs are being produced and possibly used in industries with a slower release rate than foam producers; for example, CFC use in refrigeration equipment. If the Montreal Protocol can be so easily flouted then it does not bode well for regulation of the more complex Kyoto Protocol and Paris Agreements limiting carbon dioxide emissions. 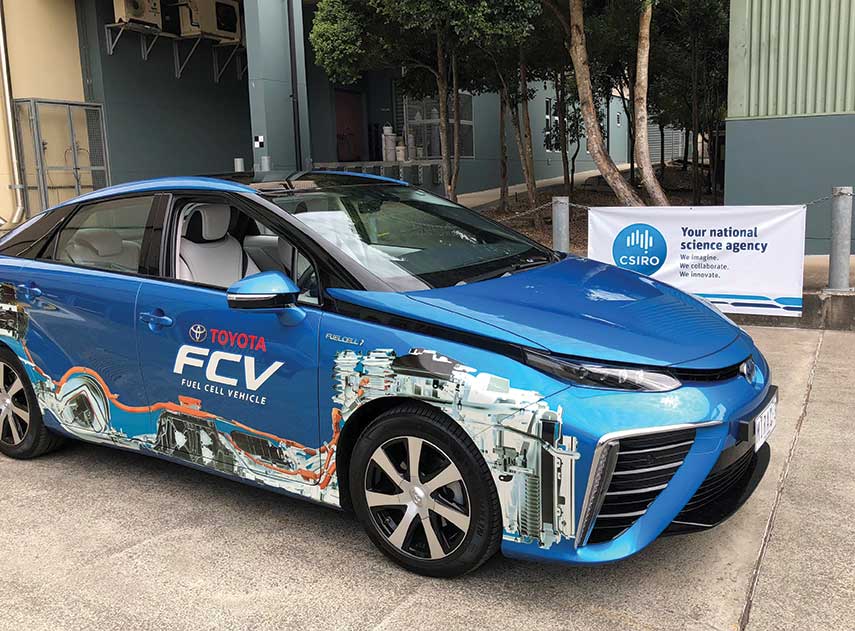 The Toyota Mirai fuel cell vehicle, ready to be fuelled with CSIRO-produced hydrogen.

CSIRO Chief Executive Larry Marshall was one of the first to ride in the Toyota Mirai and Hyundai Nexo vehicles powered by ultra-high purity hydrogen, produced in Queensland using CSIRO’s membrane technology.

This technology will pave the way for bulk hydrogen to be transported in the form of ammonia, using existing infrastructure, and then reconverted back to hydrogen at the point of use.

It has the potential to fill the gap in the technology chain to supply fuel cell vehicles around the world with low-emissions hydrogen sourced from Australia.

The membrane separates ultra-high-pure hydrogen from ammonia, while blocking all other gases.

It links hydrogen production, distribution and delivery in the form of a modular unit that can be used at, or near, a refuelling station.

This means that the transportation and storage of hydrogen – currently a complex and relatively expensive process – is simplified, allowing bulk hydrogen to be transported economically and efficiently in the form of liquid ammonia.

Recent advances in solar and electrochemical technologies mean renewable hydrogen production is expected to become competitive with fossil-fuel-based production, providing an opportunity to decarbonise both the energy and transport sectors while creating new export opportunities.

Following this successful demonstration, the technology will be increased in scale and deployed in several larger-scale demonstrations, in Australia and abroad.

In addition to its membrane technology, CSIRO is looking at all stages of the hydrogen technology chain (including solar photovoltaics, solar thermal, grid management, water electrolysis, ammonia synthesis, direct ammonia utilisation via combustion and/or fuel cells, as well as hydrogen production).