Using a state-of-the-art device for measuring mass, researchers at the US National Institute of Standards and Technology (NIST) have made their most precise determination yet of Planck’s constant, an important value in science that will help to redefine the kilogram, the official unit of mass in the SI, or international system of units. Accepted for publication in the journal Metrologia (https://doi.org/10.1088/1681-7575/aa7bf2), these new results came ahead of a 1 July international deadline for measurements that aim to redefine the entire SI in terms of fundamental constants of nature.

The kilogram is currently defined in terms of the mass of a platinum–iridium artifact stored in France. Scientists want to replace this physical artifact with a more reproducible definition for the kilogram that is based on fundamental constants of nature.

NIST’s Kibble balance uses electromagnetic forces to balance a kilogram mass. The electromagnetic forces are provided by a coil of wire sandwiched between two permanent magnets. The Kibble balance has two modes of operation. In one mode, an electrical current goes through the coil, generating a magnetic field that interacts with the permanent magnetic field and creates an upward force to balance the kilogram mass. In the other mode, the coil is lifted at a constant velocity. This upward motion induces a voltage in the coil that is proportional to the strength of the magnetic field. By measuring the current, the voltage and the coil’s velocity, researchers can calculate the Planck constant, which is proportional to the amount of electromagnetic energy needed to balance a mass.

There are three major reasons for the improvement in the new measurements, said physicist Stephan Schlamminger, leader of the NIST effort.

First, the researchers have much more data. The new result uses 16 months’ worth of measurements, from December 2015 to April 2017. The increase in experimental statistics greatly reduced the uncertainty in their Planck value.

Second, the researchers tested for variations in the magnetic field during both modes of operation and discovered they had been overestimating the impact the coil’s magnetic field was having on the permanent magnetic field. Their subsequent adjustment in their new measurements both increased their value of Planck’s constant and reduced the uncertainty in their measurement.

Finally, the researchers studied in great detail how the velocity of the moving coil affected the voltage. ‘We varied the speed that we moved the coil through the magnetic field, from 0.5 to 2 millimetres per second’, explained Darine Haddad, lead author of the NIST results.

In a magnetic field, the coil acts like an electric circuit consisting of a capacitor, a resistor and an inductor. In a moving coil, these circuit-like elements generate an electrical voltage that changes over time, said Schlamminger. The researchers measured this time-dependent voltage change to account for this effect and reduced the uncertainty in their value.

This new NIST measurement joins a group of other new Planck’s constant measurements from around the world. Another Kibble balance measurement, from the National Research Council of Canada, has an uncertainty of just 9.1 parts per billion. Two other new measurements use the alternative Avogadro technique, which involves counting the number of atoms in a pure silicon sphere.

The new measurements have such low uncertainty that they exceed the international requirements for redefining the kilogram in terms of Planck’s constant.

All of these new values of the Planck’s constant do not overlap, ‘but overall they’re in amazingly good agreement’, Schlamminger said, ‘especially considering that researchers are measuring it with two completely different methods’. These values will be submitted to a group known as CODATA ahead of a 1 July deadline. CODATA will consider all of these measurements in setting a new value for Planck’s constant. The kilogram is slated for redefinition in November 2018, along with other units in the SI.

Before they started these experiments, Schlamminger and his group went to lunch in December 2013. On a lunch napkin, each group member wrote his or her prediction of the value of Planck’s constant that the group would determine through their measurements. They tucked away this napkin under their Kibble balance nearly four years ago, and they have now compared the predictions. Shisong Li, a guest researcher from Tsinghua University in China, came closest. His prediction differed by only about 5 parts per billion from the measured result. There is no word yet on how the team plans to celebrate the winner’s guess. 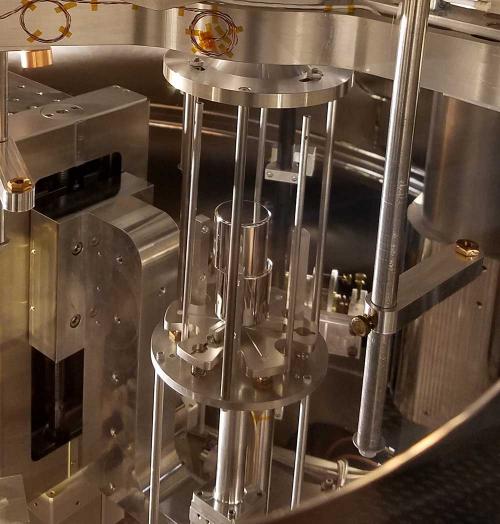 In measuring Planck’s constant with the NIST Kibble balance, researchers carefully measured the effects of the magnetic field that is generated to counteract the weight of masses. In their experiments, they varied the mass from half a kilogram to two kilograms. In this image, NIST kilogram K85 lies on top of NIST K104 for the two-kilogram measurement. 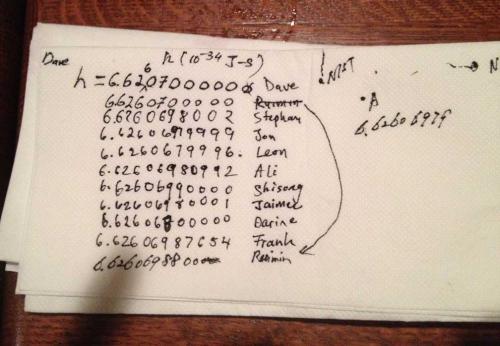 In December 2013, before NIST began its experiments on its newest Kibble balance, group members wrote their predictions on the value of Planck’s constant they would measure. Shisong Li, a guest researcher from Tsinghua University in China, came closest. His prediction differed by only about 5 parts per billion from the measured result.