Keeping astronauts in space longer with better air and water

As astronauts embark on increasingly ambitious space missions, scientists have to determine how to keep them healthy for longer periods far from Earth. That entails assuring the air they breathe and the water they drink are safe – not an easy task given their isolated locations. But scientists are now reporting in Analytical Chemistry (doi: 10.1021/acs.analchem.5b00055) a new method to monitor the quality of both in real time with one system.

Current options for testing air and water for contaminants, including microbes and radiation, require collecting samples and sending them back to Earth for analysis. But for long missions – aboard the International Space Station, for example – this approach could take six months before the astronauts have their results. The International Space Station is also equipped with some real-time hardware for detecting unwanted substances, but it has limitations. Facundo M. Fernández, William T. Wallace and colleagues wanted to come up with a system to conduct real-time, sensitive monitoring.

The researchers outfitted a kind of air quality monitor already used aboard space missions with a device that can vaporise water samples, turning its contents and any contaminants, into a gas. The gas can then enter the air quality monitor for analysis. Astronauts could also use the same equipment, with a modification, for testing the air. The team says the system could be used in space or for remote locations here on Earth. 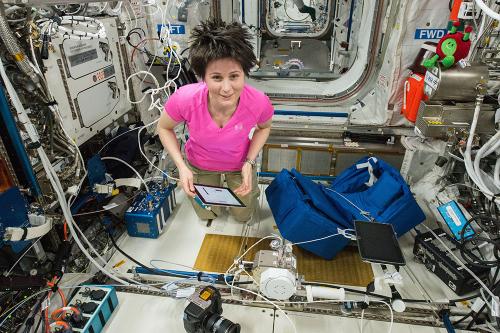 Currently, ISS residents such as European Space Agency astronaut Samantha Cristoforetti must collect air and water samples and send them back to Earth.