The next time you snap a piece off a chocolate bar for afternoon tea, consider the polymorphic behaviour of cocoa butter.

The next time you snap a piece off a chocolate bar for afternoon tea, consider the polymorphic behaviour of cocoa butter.

Chocolate. Once reserved for emperors and royalty, this edible luxury is now within the reach of most people. Legend has it that Aztec warrior Montezuma demanded 50 chalices of choclatl – drinking chocolate spiced with annatto (a natural colouring agent), which would stain the drinker’s lips blood-red – before retiring with his harem of wives. (No word on what his wives thought of the brew.)

Chocolate is made from cacao beans, which are obtained from the pods of Theobroma cacao, a tree that grows 20° above and below the equator. When ripe, each pod is sliced open and its mucilaginous fruit are removed and fermented, a process that converts the fruit sugars into a soup of ethanol, acetic acid and lactic acid. At this point, the cacao bean is not particularly tasty, but it contains flavour precursors with the potential to express the chocolate flavour that many of us seek. Next, the resulting cacao beans – a misnomer, as botanically, they’re actually seeds – are dried to a maximum of 8% humidity, and then shipped to a chocolate maker.

The chocolate maker winnows the beans to remove their papery husks, and roasts them to transform flavour precursors into full-blown flavours. The Maillard reaction creates roasty pyrazines, floral oxazoles, and even vegetal pyridines. Other pathways can result in fruity esters, nutty furans, butterscotchy diacetyls, and more. Depending on the roasting temperature, acetic and lactic acids can persist, as do some of the bitter alkaloids that provide chocolate’s much-touted health benefits.

Once roasted, the cacao beans are ground into a paste called cocoa liquor, cocoa mass, or unsweetened chocolate. Subjected to temperature and pressure, the paste can be separated into its two constituent components – cocoa solids and cocoa butter. Cocoa solids are the dry portion of the cocoa bean, much like cocoa powder used in baking. Cocoa butter is a solid fat at room temperature and melts just below body temperature.

To make high-quality dark chocolate, chocolate makers combine cocoa liquor and sugar, often adding vanilla and lecithin (an emulsifier). Milk chocolate contains the same, plus milk powder. White chocolate contains no cocoa solids, and is a combination of cocoa butter, sugar and milk powder. A good test for your chocolate’s quality is a quick scan of the ingredients list: if sugar comes first, you are buying candy, not chocolate. Another cue is the presence of vegetable fats, which offer cheap substitute for the more expensive cocoa butter.

The relatively simple composition of cocoa butter belies the complexity of its crystallisation behaviour. In the realm of edibles, sodium chloride is your reliable, stalwart friend – barring the introduction of any interloping cations, it will always adopt a simple cubic crystal structure. Cocoa butter, then, is a rebellious and rambunctious stepchild, a polymorphic substance that can adopt up to six crystalline forms – the melting points of which nearly overlap. These are, most originally, labelled form I (the least stable, with a melting point of 16–18ºC) through to form VI (the most stable, with a melting point of 34–36ºC).

Six crystalline forms may be possible, but only one is desirable: form V, which offers the shiny and snappy chocolate that is so readily moulded into bars, bonbons and barks. The process of obtaining form V crystals is called tempering.

The first step to tempering is to heat chocolate over a double boiler, to melt any and all cocoa butter crystals that may be present. This may seem counterintuitive, given that commercial chocolate is already tempered, but unless you are serving your guests chocolate chips, melting is a must. In culinary school, I was taught to heat the chocolate to at least 40ºC to provide a blank slate of liquid chocolate. (There is nothing magical about 40ºC, except that it is safely above the melting point of all cocoa butter crystals but not so hot that the chocolate will burn.)

Next, transfer one-third of the chocolate to a marble countertop and spread it thinly using a long, offset spatula. Using a spackle knife (yes, the kind you would use on a wall), scrape up the chocolate, then repeat the process of spreading and scraping until the chocolate thickens and becomes slightly pasty, like a nut butter. Heat transfer from the chocolate to the marble speeds cooling, encouraging the formation of the less stable crystal forms I and II. Conveniently, these crystals are highly unstable; form I crystals quickly give way to form II, which rearrange to form III, and so forth.

Chocolate inevitably morphs from form V to form VI crystals. The latter is ugly, but safe to eat.

Next, add the thickened chocolate back to the main bowl and stir to incorporate. The crystals created by table-cooling will propagate through the bulk chocolate. Even still, the chocolate will likely be a muddle of crystal forms I–V, with its exact composition depending on its temperature and the extent of mixing. (Form VI crystals are formed by a solid–solid rearrangement, and are not obtained from liquid chocolate.)

However, as I have learned from experience, tempering requires more than just cycles of heating and cooling. French chefs in towering paper hats taught me a mnemonic for tempering: TMT, or temperature, movement and time. Temperature, as we have seen, controls the types of cocoa butter crystals. Movement and time, however, are equally important. Within the liquid chocolate, fat solidifies onto seed crystals – in an ideal system, onto form V crystals – and adopts the same form, helping the crystals propagate through the bulk material. Therefore, it is important to stir the chocolate, in order to spread the seed crystals among as many fat particles as possible. And while the conversion from forms I and II crystals is quite rapid, form V crystals are the slowest to form. Therefore, you must allow time for the form V crystals to make their way through the bulk chocolate.

There are other methods for tempering chocolate. The method described above is the tabletop method, but the seeding method is also widely used. With the seeding method, a bowl of chocolate is melted completely and then seeded with a small portion of form V crystals. This is typically in the form of finely chopped or grated commercial chocolate, and some companies now offer form V powdered cocoa butter for this purpose. The principle is similar to the tabletop method: melt all the crystals, seed with form V, and hold the temperature at 30–32ºC to encourage propagation of the form V crystals. Most chocolate shops use industrial tempering machines with various temperature-controlled compartments and mechanised stirrers, but the basic principles of using temperature, movement and time still hold.

The complex tastes, aromas and flavours of chocolate come from a wide range of chemical compounds. The primary fatty acid components of chocolate.
Chocolate inevitably morphs from form V to form VI crystals. The latter is ugly, but safe to eat. (Top row left to right): Half-melted chocolate in a bowl.
Pouring one-third of the liquid chocolate onto marble.
Continuing to scrape up the chocolate. The cycles of spreading and scraping continue until the chocolate starts to thicken.

(Bottom row left to right): The chocolate has thickened to a point where it can sit on the scraper and not run off; it would feel cool to touch. This is the consistency you want before adding it back to the bowl of chocolate.
The different viscosities of the chocolate in the bowl (especially at about 2 o’clock) and the cooled chocolate, pooled on the spatula. Chocolate that has been heated to about 30°C. With more stirring and time, the form V crystals will propagate throughout to result in a bowl of tempered chocolate.

If this rigmarole seems excessive, consider the consequences of a chocolatier not using tempered chocolate. For example, to create a hollow Santa, chocolatiers typically use polycarbonate moulds: they fill them with chocolate, tap out the excess and allow the chocolate to set. Here, the crystal-packing behaviour of cocoa butter comes in very handy. Crystal forms I–IV are more loosely packed than forms V and VI. Consequently, as properly tempered chocolate sets, it shrinks by approximately 2% in each dimension. This shrinkage makes it easy for a chocolatier to remove their products from a mould. Once the chocolate sets, it’s a matter of a confident rap on the bench to dislodge it from the mould. Pity the chocolatier who has not used tempered chocolate – it will stick to the mould, no matter how hard they try to extricate it.

Properly tempered, plain chocolate has very low water activity and if stored in a cool, dark place, will keep for at least a year. Any ‘best before’ dates are mostly for enjoyment, rather than food safety. This is due to the slow rearrangement of form V crystals to the more stable form VI, which can result in a more brittle, less melty chocolate This solid–solid rearrangement occurs slowly, over the course of many months. Because form VI crystals are packed more closely than form V, the change causes interstitial liquid cocoa butter to be squeezed from the interior onto the surface, resulting in a slightly yellow sheen called fat bloom. The issue is exacerbated in systems with other fats, namely milk chocolate and anything with nuts or nut fillings. It can also occur if chocolate is not stored properly – that is, if it is subjected to variable temperature or humidity. Notably, while fat bloom looks like mould, it is not. So, go ahead – that chocolate Santa is still safe to eat.

Egranie Yuh is a freelance writer and editor who teaches people how to taste chocolate. She was previously an organic chemist and a chocolatier. She is the author of The chocolate tasting kit (Hardie Grant) and lives in Vancouver, Canada. Learn more at thewelltemperedchocolatier.com. 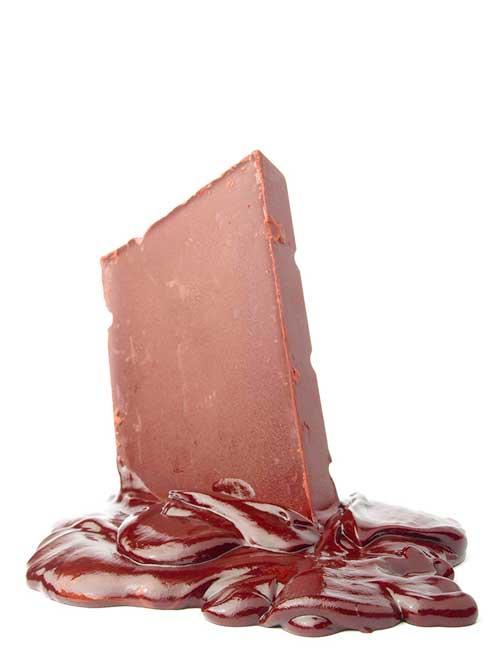 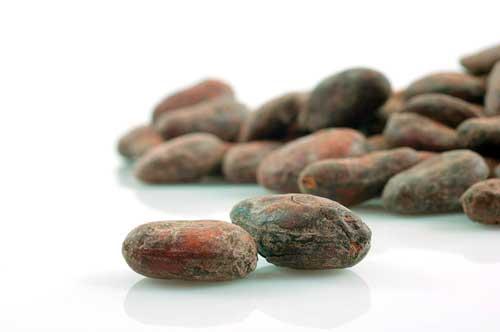 The complex tastes, aromas and flavours of chocolate come from a wide range of chemical compounds. 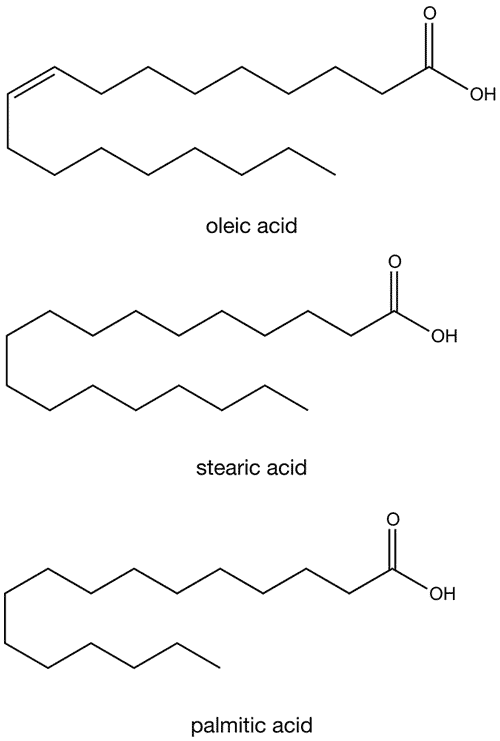 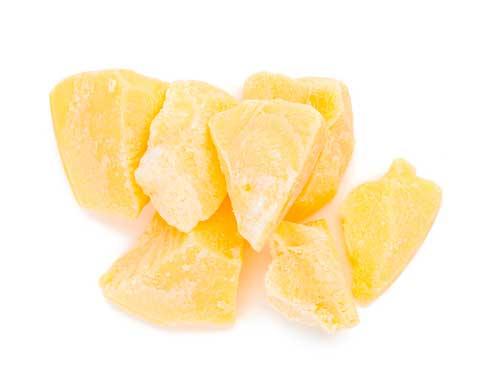 In addition to creating chocolate's luxurious melt, cocoa butter provides a vehicle for all of chocolate's estimated 600 flavour molecules to reach our taste and olfactory receptors.