Publication of three papers by researchers at the University of Adelaide’s School of Agriculture, Food and Wine has completed the work of the late Max Tate into bacterial antibiotics and control of plant pathogens.

More than 40 years ago, Max Tate and his co-workers at the University of Adelaide studied the compounds produced by bacteria that invade plants. At the time, important results from three students – Christopher Elvin, Anna Savage and Benjamin Lethbridge – could not be published with confidence.

Improvements in NMR spectroscopy and mass spectrometry have led to results that can be published. The studies of the three students all relate to compounds produced by bacteria that infect or colonise plants to outcompete their rivals.

Both symbiotic and pathogenic bacteria infect plants. The most important symbiotic bacteria are rhizobia, of which the genus Rhizobium is of most interest here. Rhizobia fix nitrogen in leguminous plants. They are attracted to plants by plant root exudates, while the plant uses lectins (non-catalytic proteins) to recognise the bacterial cell wall polysaccharides. Rhizobia commonly infect the plant through root hairs but can also enter the plant at wounds or cracks, or between cells of the intact epidermis. Once inside the plant, the bacterium forms a very close association with the plant that results in the formation of specialised nodules where the nitrogen fixation occurs. Cells of Rhizobium species change to a bacteroid form and colonise the nodules. The plant provides energy in the form of C4 dicarboxylic acids and in return the bacterium gives the plant nitrogen-rich compounds, which are synthesised by using nitrogen derived from the atmosphere.

To gain an advantage over other rhizobia, some Rhizobium bacteria produce peptide-type bacteriocins (bacterial antibiotics). When first discovered in 1968, a bacteriocin produced by Rhizobium leguminosarium biovar T24, called trifolitoxin, was of great interest. This bacterium is extremely aggressive in nodulation-competition experiments on clover through the production of an antibiotic that showed broad activity against fast-growing rhizobia. Ben Lethbridge devoted his PhD to the study of this bacteriocin peptide (doi.org/10.1038/s41429-021-00497-0). The bacterium has a simple strategy of producing trifolitoxin, which when released into the soil has direct action on other rhizobia.

There are more than 150 different pathogenic bacteria. Max and his colleagues were particularly interested in the tumour-inducing bacteria Agrobacterium tumefaciens and related species. Pathogenic Agrobacterium are closely related to symbiotic Rhizobium bacteria and are present in most agricultural soils. Crown gall is a plant disease caused by the bacterium A. tumefaciens. This carries a tumour-inducing plasmid (a self-replicating extrachromosomal DNA molecule) that contains pathogenicity-related genes, which enable it to cause gall formation on a range of dicotyledonous plants. Pathogenic agrobacteria are first attracted to specific chemicals leaking from plant wound sites and then firmly attach to injured plant cells. Plant wound chemicals can also activate the transfer of part of the tumour-inducing plasmid directly into the chromosomal DNA of the host plant cells. The T-DNA (transferred DNA) of the tumour-inducing plasmid, once inserted and functional inside the plant cell, codes for the production of plant hormones, which leads to the formation of disorganised tumour tissue and opines, which are bacterium-specific nutrients. Agrobacterium is the only known organism capable of inter-kingdom DNA transfer.

Prior to the development of a biological control treatment that prevents crown gall (NOGALLTM, based on R. rhizogenes (formerly A. rhizogenes) strain K1026; Professor A. Kerr, University of Adelaide), plant nurseries as well as almond and stone fruit orchardists lost up to 50% of seedlings to crown gall. Strain K1026 cells can colonise wounded plant tissue and block infections by the predominant crown gall-causing pathogenic agrobacteria that infect nut trees (such as almonds and walnuts), stone fruit trees (such as peach, plum, apricot and cherry), roses and many other horticultural crops. Galls are typically located on the crown of the plant at or below the soil surface but can also be found on other plant parts. Fruit trees infected with crown gall produce lower yields with variable fruit set, size and quality. In severe cases, crown gall can weaken or kill the host plant. Losses to the nursery industry can be particularly severe because plants with crown gall must be culled.

In the case of rhizobia, plants voluntarily supply the nutrients specifically required by the bacterium. In contrast, pathogenic agrobacteria ‘engineer’ the plant to synthesise opines required by the bacterium. Opines are produced in crown gall tissue because the pathogenic bacteria manipulate the plant’s metabolic activities to force the plant to provide nutrients in a form that only the inciting bacteria can catabolise. Most of the known opines such as octopine, nopaline, leucinopine and mannopine are secondary amines and act as both a source of a nitrogen and a source of energy for the bacteria. Two carbohydrate phospho-diesters, agrocinopine A and agrocinopine C, were identified by Max Tate and his students at the University of Adelaide in the 1980s. They are a source of both phosphorus and energy for the tumour-inciting bacteria. These opines also promote the spread of the tumour-inducing plasmid in populations of Agrobacterium. After the identification of agrocinopine A, agrocinopine C was characterised by Anna Savage as part of an honours project. Our recent publication shows that agrocinopine C exists in solution as a mixture of five anomers (doi.org/10.1038/s41429-017-0014-y). We expect that agrocinopine A also occurs as a mixture of isomers in solution.

Agrocin 84 and agrocin 434 are two bacteriocins identified by Max and his students that are produced by different strains of R. rhizogenes. These non-peptide antibiotics are produced by the NOGALL bacteria (strain K1026) and form the basis of four decades of successful biological control of crown gall.

An interesting feature of the agrocins is that they have a toxic moiety and an uptake moiety. The uptake moiety allows the entry of the bacteriocin through recognition by certain membrane transporters (permeases) by deception. This uptake system has been described as a Trojan horse. For example, only bacteria with specific agrocinopine transporters are sensitive to agrocin 84. To protect against crown gall, both agrocin 84 and agrocin 434 are delivered by the application of a live, non-pathogenic R. rhizogenes (strain K1026) to the roots, cuttings or seeds of susceptible plants before planting.

Chris Elvin studied another bacteriocin, agrocin 108 (doi.org/10.1038/s41429-017-0014-y). This was isolated from R. rhizogenes strain K108 and is another low-molecular weight nucleotide bacteriocin that could be used in conjunction with both agrocin 84 and agrocin 434 to give greater protection against crown gall.

It is interesting that two closely related bacteria have quite different strategies in their battle for supremacy. Ben Lethbridge’s peptide antibiotic, synthesised by certain strains of R. leguminosarum, acts directly on the competition, while strains of R. rhizogenes, studied by Max and his co-workers (including Chris Elvin), not only produce non-peptide antibacterial compounds to attack competitors but also have the strategy of forcing the plant to produce opines, including Anna Savage’s agrocinopine C, which neither the plant nor competing bacteria can utilise.

It has taken 40 years of improvement in instrumental chemistry, some ancient samples, a few ‘naughty’ bacteria and a very dedicated scientist (R.E. Asenstorfer) to be able to finalise these three publications for Max Tate.

Robert Asenstorfer MRACI CChem, Maarten Ryder, Scott Donner, Benjamin Lethbridge and Graham Jones MRACI are at the School of Agriculture Food and Wine, the University of Adelaide. This paper is dedicated to the memory of Max Tate. 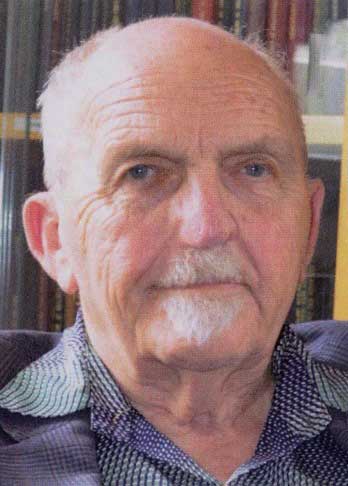 Max Tate passed away in 2016 after a battle with melanoma and having spent the best part of 35 years working at the University of Adelaide, initially in the Faculty of Agricultural Science, later known as the School of Agriculture, Food and Wine, on the Waite campus. Max studied at the University of Sydney, did his PhD with Stephen Angyal at the University of New South Wales, and then did a postdoc in Canada before moving to the University of Adelaide in 1964, where he taught until his retirement in 1998. He continued working there as visiting scientist until his death. During this time Max trained numerous research students, with his initial research focusing on the structure and function of inositol phosphates. A very productive part of Max’s research career was with his good friend Professor Allen Kerr on the internationally recognised biological control of crown gall and the study of naturally occurring antibiotics against plant pathogens. This research led to the development of a genetically modified biological control agent for crown gall, a plant tumour disease of economically important tree crops, which is still a commercial product in several countries worldwide.

Max applied chemistry to solve a diverse range of biological problems that, besides the work mentioned above, included non-wetting sands, bacterial conjugation factors, anti-helminthics and wine chemistry. Even though Max was an early adopter of thin-layer chromatography, when he discovered high-voltage paper electrophoresis, this became his method of choice. However, Max was not afraid to use a diversity of techniques to give him the independent data necessary to complete a study. Max always claimed he had a well-developed ‘bullshit detector’ and would not be compromised by soft arguments. To quote Professor Allen Kerr, ‘Max taught his students to think of nature as chemical simplicity rather than biological complexity’. Max was a long-time member of the RACI. He told the story of how Adrien Albert thought that some of Max’s work was interesting and so asked if Max would join a soon to-be-formed Division of the RACI. For this reason Max considered himself (others may disagree) the Agricultural part of the Medicinal and Agricultural Chemistry Division. These three papers essentially complete Max’s studies. The only research problem remaining on which Max devoted a great amount of energy in his later years was to develop a vetch (Vicia sativa) without the potential neurotoxin g-glutamyl-b-cyanoalanine. It is now time to say vale Max Edwin Tate (1932–2016). 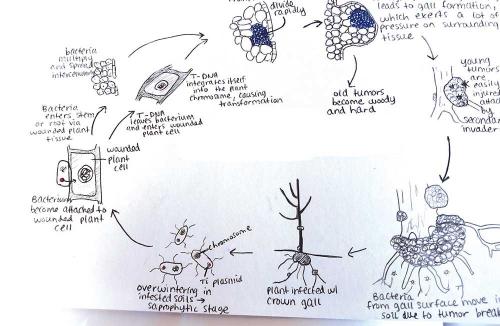 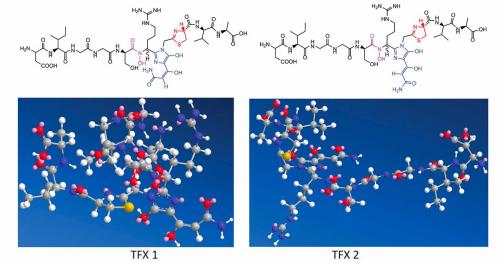 Trifolitoxin (TFX) is a bacteriocin peptide. It has a thiazoline ring, which is important for function. The three-dimensional shape is critical because TFX1 has little biological activity. The cis–trans configuration of the hydroxy-glutamine determines the three-dimensional structure of TFX. 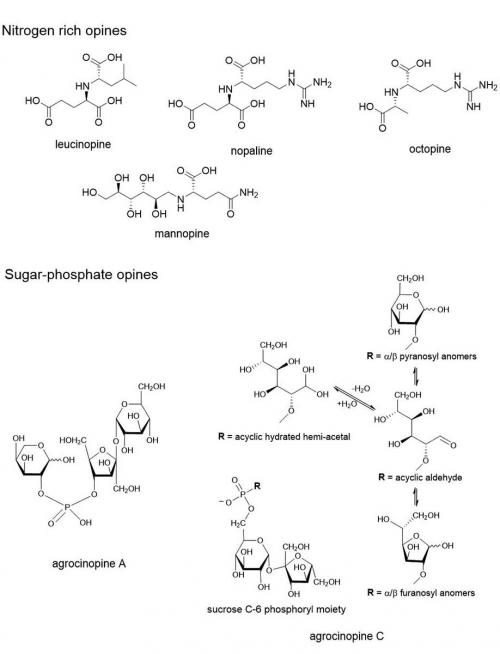 Opines serve as A. tumefaciens-specific substrates synthesised by the plant after bacterial ‘engineering’ of the plant genome. 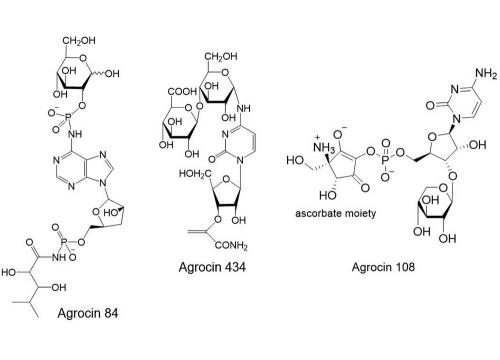