The dictionary meaning of the expression ‘to know your onions’ is ‘to be experienced in or knowledgeable about a subject’.

There were two people with the family name of Onions who made a name for themselves in 19th-century England. One was S.G. Onions, who in 1843 introduced sets of coins as teaching aids for school children, to help them to learn their pounds, shillings and pence.

The other was C.T. Onions, a grammarian and lexicographer, who in 1895 became the fourth editor of the Oxford English Dictionary and wrote other scholarly works.

But the expression ‘knowing your onions’ did not appear in print until the 1920s, strongly suggesting that neither S.G. nor C.T. was responsible for the expression. It is now generally accepted that it originated in the United States, appearing first in Harper’s Magazine in March 1922.

On 26 January 2022, there were short articles in The Times (London) and other UK newspapers arising out of a national survey in the previous year that identified some endangered expressions in the English language. Of those surveyed, 68% said they would never use the expression ‘know your onions’.

The chemical agent that causes people to ‘cry’ when cutting onions is syn-propanethial S-oxide. But it is not waiting in whole onions for some unsuspecting person to plunge a knife into the onion, to wreak its teary effect. Two more chemical steps are required.

Among the chemical compounds that give onions their characteristic flavour are amino acid sulfoxides, the most abundant being derived from arginine and glutamine. The act of cutting an onion breaks open onion cells, releasing enzymes called allinases, which generate sulfenic acids. But it doesn’t stop there. 1-Propenesulfenic acid itself is rapidly rearranged by a second enzyme, the lachrymatory factor synthase, yielding syn-propanethial S-oxide. This volatile compound diffuses through the air and, on contact with the eye, stimulates sensory neurons, producing a painful, stinging sensation. The eye responds by releasing tears to dilute and flush out the irritant.

Can onions be sliced and diced without the discomfort of tears?

Numerous solutions have been proposed. Heat the whole onions before wielding the knife – this destroys the enzymes, short circuiting the cascade of reactions. Cool the onions first in the freezer or in ice water – the low temperature reduces the rates of reaction in the cascade. Insert a screen between the onions and the person cutting them up.

Children are known to be naturally innovative. The photo shows my then five-year-old London granddaughter’s simple solution – wear your swimming goggles!

But there is a new solution at hand. For some years, plant breeders at Bayer in the US (since taken over by BASF) have been working to breed onions that do not cause tears. These are called ‘Sonions’ and went on sale at Waitrose supermarkets in the UK in January this year, although they have been available in the US for two years.

Peter G. Lehman FRACI CChem joined RACI as a student member in 1963, subsequently pursuing a career in academia and industry, the latter in Australia and the US. In his retirement, he has been writing occasionally for Chemistry in Australia. 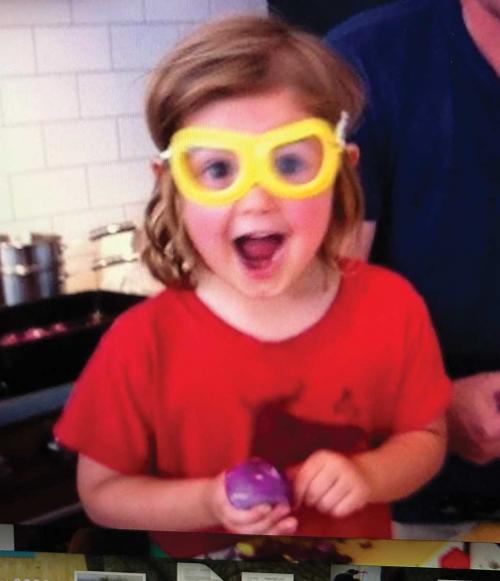 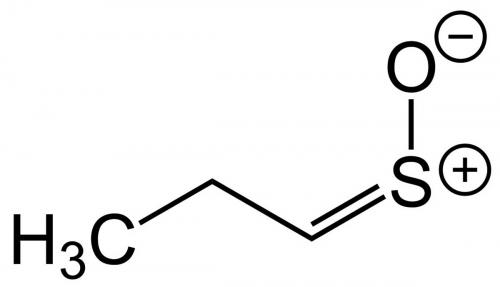 Heat the whole onions before wielding the knife – this destroys the enzymes, short circuiting the cascade of reactions.