The most important value in building successful research partnerships between a researcher and a business executive is trust. Therefore, having a clear common purpose is critical. Building trust can be complicated by different expectations of the researcher and the executive involved in developing a partnership. A top researcher expects to be operating at the edge of new knowledge, whereas a business executive seeks a secure innovative opportunity to grow the business. A novel material recently developed in a laboratory may provide a solution to a problem that is not the central problem for the company. This is the difference between the two factors, science-push and industry-pull. Research innovation is at its best and most productive when there is an optimum balance between these two factors.

Research innovation itself has many variations, all of which are valuable. Choosing the form for best results depends largely on context. First, a single researcher or small group may develop a novel product that is able to be commercialised and they then engage with a company to manufacture and market the product under contract. Second, a company may identify and engage a single researcher with special expertise to develop a product that the company knows will have a strong market. Third, a company and a research team may conduct joint technology planning together where the intellectual contributions to innovations come from both parties operating as a unified team. Joint technology planning (JTP) works best when there is a high level of shared but complementary technology knowledge, a shared commitment to innovation, and trust between the company and the research team.

The JTP approach emulates to some extent corporate R&D planning around an important new product. For example, in the case of Du Pont developing a new coating for golf balls (a very large global market!), the company probably established an interdisciplinary project group drawn from several of its divisions, including polymer chemists, mathematicians (modellers), fluid dynamics engineers, manufacturers and marketers.

During 2008–20, I initiated and convened JTP meetings with many New Zealand companies as an important aspect of several large research contracts. The JTP process was progressively refined over that interval. The JTP process always started with the convenor, usually me, and one other senior researcher meeting informally with the CEO and/or CTO of the company to explore and confirm if there was a genuine interest in joint research and a shared culture of innovation. The senior executive also outlined for us briefly the core business of the company. Then as convenor of the JTP, I selected and then invited a team of several senior researchers with different capabilities from across the fields of science, engineering and medicine to cover the main dimensions of the core business of the company. With major NZ Government-funded research, we were strongly encouraged to establish a ‘NZ best team’ and so some members of the team would be from other provider organisations, including other universities and NZ Crown Research Institutes (government laboratories). I recommended to the senior executive the names and range of research capabilities in the interdisciplinary research team for their agreement.

We then convened a JTP meeting with non-disclosure agreements signed prior to the meeting. The JTP meeting was limited to not more than 12 members because smaller groups encouraged genuine exchange, discussion and debate by individuals. The senior company executive began by explaining the core business and the technology aspirations of the company (in confidence) and the future product options that the research team might be able to help the company develop. Each researcher then briefly described how their research capability related to the technology aspirations of the company. At this point, the senior executive nominated the top priority new product concept and the team of researchers brainstormed ideas for achieving success with the future product. The company executive then critiqued or elaborated the product development suggestions. This was done for all prioritised future product projects. These joint product development plans were written up as a confidential JTP plan for the partnership and this plan was submitted to the company for agreement or amendment. The plan then became the basis of a terms sheet and then a formal agreement between the research organisation and the company.

The key to our JTP success over the interval 2008–20 was a high level of mutual understanding of each other’s needs and capabilities. The advantage to the company as a result of JTP is that they get a complete product development plan rather than just a single product development or modification or single problem solved. The advantage to the researcher is that they get a bespoke partnership with the company in their primary capability area, which may lead to other future joint projects. With my retirement in 2020, the JTP strategy is certain to be continued and refined further by researchers and executives in other new research programs. Of course, the international corporate world that inspired the JTP approach will continue to deploy its original version of interdisciplinary product development strategy.

The JTP protocols outlined here were employed by NZ Ministry of Business Innovation and Employment (MBIE)-funded research projects and programs: the Biocide Toolbox, Hybrid Polymers, Materials Accelerator etc. As the founding director of these MBIE programs and Pro Vice Chancellor of the Innovation Campus, I introduced the JTP process to help achieve contracted levels of industry engagement. These were large national network programs involving interdisciplinary teams. The JTP method was initially developed and employed at the University of Auckland Tamaki Innovation Campus but also continued strongly on other campuses during 2008–20. The Innovation Campus was developed as a mainly postgraduate campus based on international foresighting themes that involved research partnerships between the universities, Crown Research Institutes (government laboratories) and NZ companies. 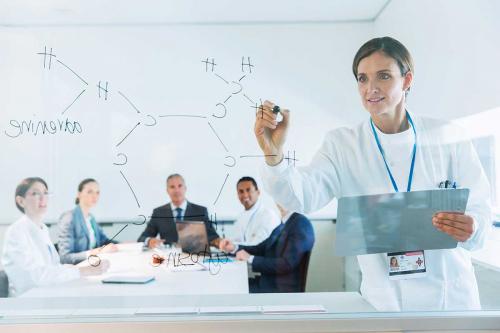