Science is, for most of us I hope, as much a passion as a career.

Once every few years, there comes for me a moment when all of the data, all of the literature, all of the experiments – ones that have worked and ones that have failed – fall together. This moment hits me like the chime of a perfect note. The ideas crystallise in my mind in perfect formation, and for one fleeting instant it feels as if I could almost understand the universe.

That feeling slips away again pretty rapidly, but those few moments of unalloyed intellectual joy sustain me through the long hours of all the other hard work and discipline that being a scientist demands.

In late 2021, I got to experience that thrill again. While working a problem with my colleagues, taking their ideas and adding them to the collective, I was struck by an idea so revolutionary (in my little specialist field), so utterly perfect, that I instantly knew. I knew that the idea was right. I knew that it would work. I knew that it would solve a challenge that I had been idly pondering on since the beginning of my career – in other words, for nearly the last 30 years of my life.

I started my career at a small industrial research lab in Sydney. We were trying to develop and commercialise an entirely new way of producing copper and other base metals from mineral concentrates.

Putting that into context, copper typically comes out of the ground at about 5% concentration, in various forms of copper sulfide mineral: most commonly CuFeS2, but also CuS, Cu2S, Cu5FeS4 and occasionally more exotic minerals such as Cu3AsS4. The host rocks are crushed and the target minerals extracted by froth flotation to yield a ‘concentrate’ of 20–25% copper grade.

There are various processes to make metal, but the most common route is (by train, truck or ship) to a matte smelter, which separates metal sulfides from gangue to produce copper matte – an enriched mineral sulfide mixture at about 60–65% copper grade. The matte is transported to a ‘converting’ smelter to make ‘blister copper’ metal at 98–99% purity. Then the blister copper is transported yet again, to a refinery that finally produces 99.99% purity metal by anodic dissolution and cathodic reprecipitation in a (sulfate-based) electrowinning tankhouse.

It is possible to leach the minerals directly into solution by using sulfuric acid, then to purify the mixture by solvent extraction, and then to electrowin the copper back directly from the ‘pregnant’ leach liquor. Rather than smelting (pyrometallurgy), this is called hydrometallurgy, and it’s a growing alternative in global copper production. The problem is that sulfate is a very poor chelating agent, so all of the existing processes are slow (and therefore costly) or require high temperatures and pressures (which is really costly).

The idea that we were working on was a single process to use the extremely strong chelating effects of halides for much more efficient mineral leaching. In theory, we could take copper concentrate directly through to high-purity metal at the mine site. Leach, purify, electrowin. Fast, flexible and cheap. Doing so would have massive environmental and cost advantages: no gaseous emissions, no liquid effluents, safe rejected iron and sulfur solids that never leave the mine site. It could also more fully utilise existing resources, and safely process contaminated resources, such as those containing arsenic.

Critically, copper forms Cu2+ in sulfate, but in the halide system it can also form Cu+. Needing only one electron per atom to recover the metal from solution, and with key electrical advantages, the electricity requirement would be more than halved, with all the cost and greenhouse advantages that arise from that.

That approach in itself wasn’t new. The first papers on the topic appeared in the early 19th century. Until the 1980s, materials of construction made it impossible. However, unlike sulfate systems (which form neat, flat-plate cathodes), the direct electrowinning from halide forms dendritic crystal structures – effectively ‘little trees’. These make electrowinning incredibly challenging, and none of the previous designs worked very well – not well enough for commercial application.

That latter problem is what has kept halide hydrometallurgy to being just a niche industrial application for the last 40 years. You could either get copper into solution easily (for which halide is best) or get it back out easily (for which sulfate has until now been the best), but not both.

I’m delighted to report that this easy-in easy-out problem is what my colleagues and I at DCS Technical have finally cracked. We’ve designed a completely novel electrowinning cell to produce and recover the dendrites in a controlled fashion, at a fraction of the cost of existing technologies.

That means that we can have all the advantages that halide leaching has promised for so long, but now with an effective and efficient way of directly electrowinning the copper metal from that halide solution. With all the resulting economic and environmental advantages, we’re calling it ‘copper that comes out green’.

With just 6–8 years of further effort in commercialising this breakthrough, my team and I could become an overnight success!

In the meantime, let’s all celebrate that special element, ‘enthusiasum’, that brings us all together as scientists. Your Eureka moment is out there, just waiting for you. I wish each and every one of you that joy. 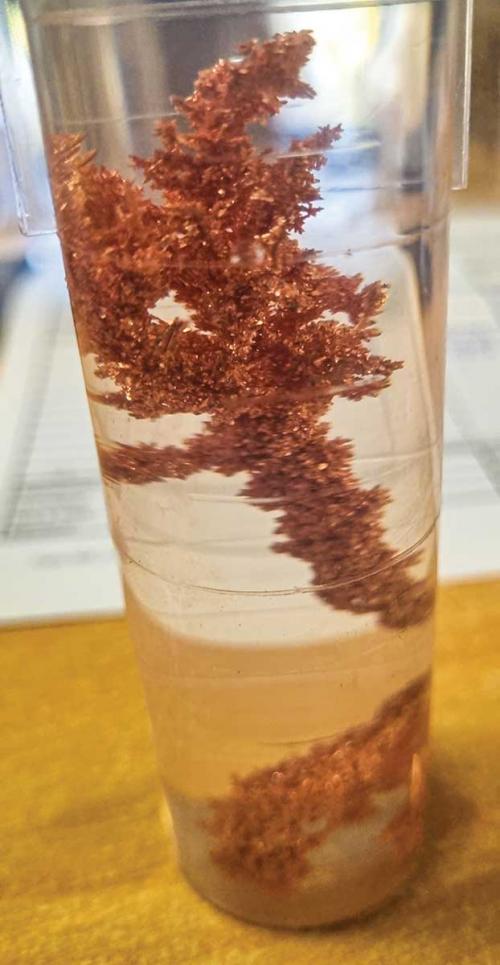