Like a household or a business, a chemistry department needs to review its holdings from time to time, focusing on certain possessions and asking whether to keep them, move them to new homes or ultimately see to their destruction. So it was that I learned a few months ago that the Chemistry School at the University of Melbourne was asking if anyone had a use for a large bottle of antimony potassium tartrate. I recognised right away that this substance was also known as tartar emetic and that my family had used it as an ant poison.

When I was growing up in Melbourne, we were plagued by the small brown Argentine ant (Linepithema humile) that roamed the kitchen looking for sugar. Departments of agriculture recommended poison baits based on borate or arsenic. I’m not sure if my parents knew about those but they somehow knew that poisoning was the way to reduce the ant populations (now I know that you should use talcum powder, which they don’t like because it sticks to their feet). So my mother asked a local pharmacist to help; he recommended tartar emetic and sold her a small amount, which we mixed with honey and placed in shallow containers such as bottle tops in places that the ants frequented. It was a family pharmacy and I know the current owner, who possesses the ‘poisons book’ of those days. He confirmed that tartar emetic was sold for that purpose, but for privacy reasons, he said, he would not tell me whether my mother was among the customers who purchased it. The baits certainly worked and, as a budding chemist, I stored away this little piece of chemical toxicology.

The bottle of this chemical had been at the university for many years, and no record of its purchase was available. Was there an ant problem in that old building in the early 1950s, I wondered? I rather doubted it, and so I turned to the internet to see what other uses were recorded for antimony potassium tartrate. Tucked away at the end of the Wikipedia entry (first stop for any chemical search these days) was a 1960 reference to its use in the resolution of cis-dinitrobis(ethylenediamine) cobalt ion, by Francis Dwyer and F.L. Garvan at the University of Sydney. This cobalt complex had been resolved by Werner, using d-camphorsulfonate, but achieving good yields of both optical antipodes was quicker and cheaper with antimony potassium tartrate. This was not the first time that Dwyer and his students had used this unusual resolving agent: the first was in 1949 with tris-o-phenanthroline ruthenium(III) and some ruthenium(II) complexes; then with the analogous osmium(II) and iron(III) species in 1950; and with a number of tris-2,2'-dipyridyl metal complexes in 1951.

So, is this why the Melbourne chemistry store had a bottle of antimony potassium tartrate? It didn’t take me long to guess which member of staff had been interested in metal coordination chemistry, and to zero in on Professor Don Stranks. Sure enough, I found a paper with Geoff Lawrance, published in 1978 (after Stranks had moved to South Australia), on enantiomers of tris-(1,10-phenanthroline) complexes of nickel(II) and iron(II), prepared using the antimony complex and used for racemisation studies. Peter Tregloan confirmed my guess and thought there might have been an undergraduate laboratory exercise based on this chemistry but … it was a long time ago and no laboratory manuals seem to have survived. As you can see, antimony potassium tartrate has a very unusual chemical structure, with four chiral centres, so no wonder it’s a great counter ion for effecting optical resolutions. 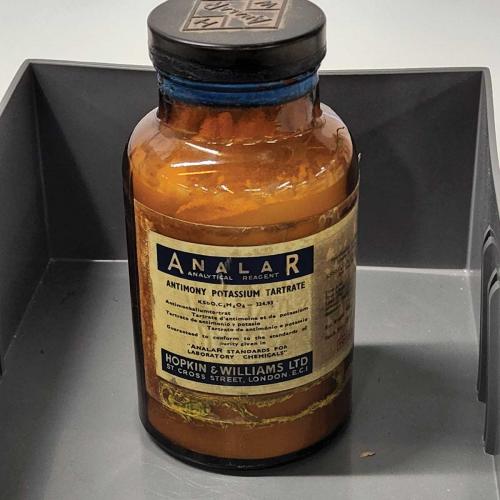 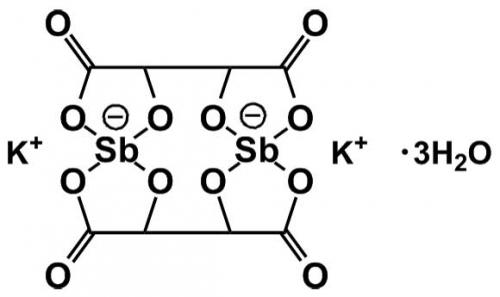