Unmasking the structure of an azasugar

Azasugars are a class of organic compounds that are similar in structure to regular carbohydrates, except they have a nitrogen atom in the ring instead of the usual oxygen. This ‘similar, but different’ structure means that, compared with regular sugars, azasugars often have stronger affinities for glycosidases – enzymes that break glycosidic bonds of complex carbohydrates – because of the potential for protonating the nitrogen atom, affording a stronger interaction with the polar amino acids at the enzyme’s active site.

This affinity is the guiding principle behind azasugar-based drugs such as Miglitol and Migalastat. Miglitol is a type 2 diabetes medication that prevents post-prandial blood sugar spikes by slowing the breakdown of complex carbohydrates. Migalastat is a medication for treating a rare genetic disorder known as Fabry’s disease, characterised by a mutated form of α-galactosidase A; by binding to the defective enzyme and helping it fold correctly, the azasugar-based drug restores the enzyme’s usual function and protects it from the cell’s own enzyme mutation defences.

The many functional groups and stereogenic centres of azasugars often make their structures difficult to determine. Such was the case for glyphaeaside C: an azasugar isolated from Glyphaea brevis, a small tree native to the tropical regions of Africa (Phytochemistry 2015, vol. 109, pp. 76–83). At first, glyphaeaside C was believed to be a six-membered ring azasugar with the same configuration as D-glucose, with one of the hydroxy groups replaced with a long alkyl side chain. The α-configuration of the side chain would lead one to expect strong α-glucosidase inhibition, but glyphaeaside C was instead observed to be a strong β-glucosidase inhibitor. This discrepancy meant that either the side chain was playing an unexpectedly important role in determining the azasugar’s enzyme selectivity or the originally proposed structure was incorrect.

Often, just isolating a compound from a natural source does not tell the full story and a total synthesis is required to unmask the compound’s true structure. In the case of azasugars, their biological activities and basic spectroscopic data can tell us that a ring-bound nitrogen is present, but the carbon atoms that it is bonded to can be harder to deduce. A closer inspection of the NMR spectroscopy data led us to hypothesise that glyphaeaside C was in fact a five-membered ring azasugar. Our proposed structure could be obtained from the original by reattaching the nitrogen to a different carbon, thereby shifting the other carbon from the ring to the side chain, although the two structures cannot be interconverted as simply in practice.

To test our hypothesis, as part of my PhD project, we conducted a total synthesis of the five-membered ring structure by following and adapting procedures used by other groups to prepare related broussonetine azasugars, including a novel epoxide ring-opening reaction using a Gilman-like reagent. As it turns out, the NMR data of our proposed structure was a perfect match with the natural product, although it rotated polarised light in the opposite direction. This suggests that natural glyphaeaside C is the mirror image, or enantiomer, of the compound that we prepared. Like the broussonetines, our synthetic product was a strong β-glucosidase inhibitor, although noticeably weaker than the natural product. Although we are much closer to knowing the true structure of glyphaeaside C, there remains much to be unmasked about its interactions with glycosidases.

Brendan Byatt is a PhD student and Stephen Pyne FRACI CChem is a professor of chemistry at the University of Wollongong. This research was published in Organic Letters 2021, vol. 23, pp. 4029–33. 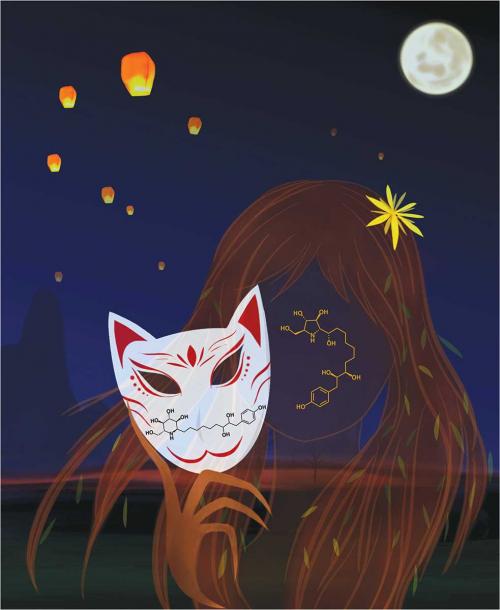 The many functional groups and stereogenic centres of azasugars often make their structures difficult to determine.