The lockdowns of 2020 and 2021 put libraries out of reach for weeks on end, and although my local library had a ‘mail out’ service, and the University of Melbourne did, too, I turned to my own library to re-read some of the volumes on my shelves. There were some books that I’d bought with good intentions but never actually read, an example being Physical chemistry from Ostwald to Pauling. The making of a science in America. I had acquired it as a reference work but what I found was a rollicking tale of the transfer of ideas, of personal rivalries and of eccentricity.

The ideas of Ostwald (1852–1932), van’t Hoff (1852–1911) and Arrhenius (1859–1927) came together in the theory of electrolytic dissociation of salts in solution, with most of the relevant experimental work being carried out in Ostwald’s laboratory in Leipzig. The European founders of this discipline of physical chemistry were known as ‘ionists’ and their American disciples served under the same flag. Of the more than 40 Americans who came to work with Ostwald, the most prominent was Arthur Amos Noyes (1866–1936), who was there in 1888–89, and who later cemented the trans-Atlantic link by sending many of the students he trained at MIT in Cambridge, Massachusetts, to follow in his footsteps.

The ionists held that dissolving a salt AB gave rise to ions such as A+ and B–, and gave rise to properties that depended on the number of particles in solution, such as osmotic pressure, elevation of boiling point and depression of freezing point, all coming under Raoult’s law. This worked well for very dilute solutions, but for stronger solutions the effects were less than simple ionic theory would predict, raising questions about the degree of dissociation and requiring the use of fudge factors such as activity coefficients. Europeans and many American physical chemists accepted the challenge and devised theories to account for the bad behaviour of their solutions. British academic chemists, led by Henry Edward Armstrong (1848–1937), dismissed the whole idea of dissociation as nonsense, so classical physical chemistry was slow to develop in Britain. There was also an alternative stream of thought in the US, championed by Wilder Bancroft at Cornell University, who kept clear of ions to concentrate on the phase rule and colloid chemistry. His bias was evident in the subjects of papers published in the Journal of Physical Chemistry that he founded and edited. In 1932, it was taken over by the American Chemical Society and adopted a more catholic editorial stance.

In the first half of the 20th century, chemistry at the University of Melbourne was classical physical chemistry of this type and its influence was still evident when I was an undergraduate there in the late 1950s. David Orme Masson, when he had finished organising science in Australia and retired from the Melbourne chair in 1923, rediscovered his interest in solutions and addressed the 1935 ANZAAS Congress in Melbourne on ‘The Molecular Condition of Aqueous Solutions of Acids, Alkalis and Salts’. He addressed the issues of partial ionisation and ionic mobility, two of the grand themes of the previous five decades. Ion mobility led him to consider the idea of ‘condensed ions’ in solution, such that sodium chloride might give rise to a single chloride ion and the cation Na2Cl+, only some of which might be completely dissociated. ‘Other explanations seem possible’, he wrote, ‘and this aspect of the problem need not be discussed further at present’.

David Rivett, Masson’s successor (1923–27), before he went off to head CSIR, was more interested in the phase rule, and he turned his experience of making ammonium nitrate in Britain in the war years, and his subsequent lectures at Melbourne, into a book in which he mentioned in his Introduction the work of many others, including Bancroft. Rivett was succeeded in turn by Ernst Hartung, whose specialties included colloids and the properties of membranes. The phase rule refused to die, however, and when young Bernard Cavanagh was appointed to replace Rivett, he had never heard of the phase rule until he came to Melbourne and did not enjoy the experience of teaching it. Neither did his students, according to Joan Radford’s 1978 history of the department. His research on activity coefficients, partition coefficients and potentiometric titrations, however, must have gladdened Masson’s heart. 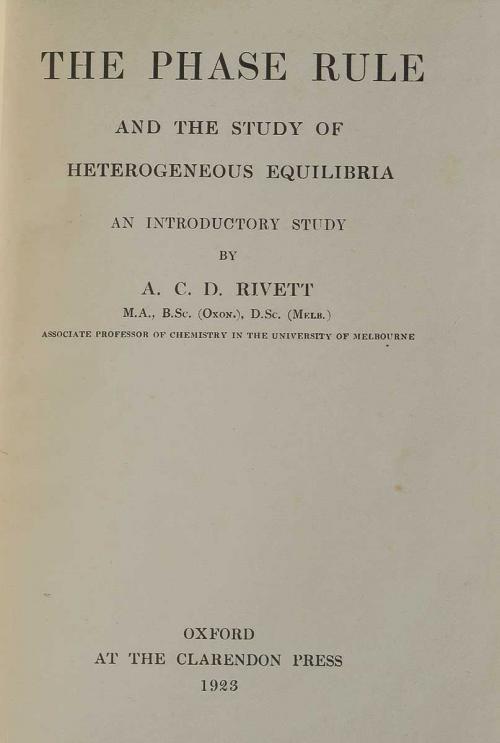