The control of the oceans’ pH is dominated by that most important buffer bicarbonate, which also controls the pH of your blood and saliva.

pH in the oceans

The average pH of unpolluted ocean surfaces is about 8.1, having decreased from an estimated 8.2 in pre-industrial times.

A drop in pH of 0.1 might seem trivial but a logarithmic scale such as that used to represent pH distorts by compressing large numbers and expanding small ones. It is needed for scales that cover a range of magnitudes (such as the decibel, lumen, and Richter scales), but for chemical calculations, absolute concentrations are required.

Salt from seawater is traditionally purified by evaporating the water from a succession of pumped or gravity-fed pools of increasing salinity to first separate out the less desirable, less soluble salts (see Maxwell I.A., Chem. Aust. December 2014–January 2015, pp. 36–37).

More CO2 in the atmosphere

Increasing atmospheric CO2 from fossil fuels means more CO2 will eventually dissolve in the rivers and oceans. ‘Increased acidity’ suggests a pH less than 7, so ‘reduced alkalinity’ is clearer.

Unlike other acids, CO2 has a dual role; it also supplies a common ion, namely carbonate.

Because of a very high concentration of spectator ions such as sodium in seawater, calcium carbonate is at least 60 times more soluble than it is in fresh water.

The following diagrams display prevalence of species and serial equilibria in seawater.

Simple activity calculations predict that the solubility product Ksp(CaCO3) is 5.4 × 10–7 in seawater at pH 8.1, but is 8.7 × 10–9 in fresh water – about 60 times lower. Kinetic control (e.g. rates of precipitation and dissolution), rather than thermodynamic control, is determinant. Tough stuff.

Many other factors, including local pollutants, can play a large (sometimes unintentional) role.

The chemistry of the oceans is very complicated; biochemical processes involving enzyme-mediated reactions are even more complicated. Organisms adapt differently to changing environmental stress; there are winners and losers from Darwinian pressure (bit.ly/3iVNbq6).

In some parts of the ocean, natural pH fluctuates substantially. Some corals can protect themselves from fluctuating pH because they control their internal pH environment, so adding excess CO2 to seawater around these corals has no effect on their survival. A good example is the corals on Heron Island in the Great Barrier Reef (go.nature.com/3jc0v8D). Oysters build their carbonate–protein-layered shells (and pearls) biochemically, from the inside out, while controlling their internal pH at 6.8.

Why would ocean organisms choose the hard-to-get carbonate rather than the dominant highly soluble bicarbonate as their source? This is still being investigated, but it has been reported that some control their internal pH independent of the oceans, as well as utilising both bicarbonate and carbonate (bit.ly/37eEQqR).

Ocean warming transfers CO2 from the oceans to the atmosphere, which helps the former but harms the latter. Increased temperature reduces the solubility of solid calcium carbonate. Increased pressure, as with increasing ocean depth, increases its solubility.

But a hyped threat from a pH drop in the Great Barrier Reef does not make any chemical sense.

Sit, as I have, in a limestone cave and watch the pH 7.6 bicarbonate-buffered water flow down and drip, whereby the formations slowly grow, not shrink.

In the words of US journalist Henry Mencken (1880–1956): ‘For any complicated problem there is a simple solution that is wrong’. We ignore basic STEM topics … pH, equilibria, buffers, activity and particularly biology and biochemistry ... at our peril.

Ben Selinger FRACI CChem is Emeritus Professor of Chemistry at ANU and, along with ANU colleague Associate Professor Russell Barrow, released the sixth edition of Chemistry in the marketplace (CSIRO Publishing) in June 2017. For more information, visit www.publish.csiro.au/book/7366. Ben guided at Jenolan (limestone) caves (NSW) in 1961 as a university summer vacation job. This article owes a major debt to Ray Hodges for his industrial experience and support. As always, Ian Rae played his crucial role as devil’s chemical advocate. Scott Kable and others watched out for chemical incorrectness. Any misinterpretations are mine.

The fresh water that enters limestone caves is initially unbuffered.

This rainwater laden with aqueous CO2 (0.035%, pH around 5.3) percolates through the soil and picks up much more CO2 from plant roots and decaying vegetable matter (0.15–0.65%), becoming more acidic. This brew extracts calcium carbonate and relocates it (via bicarbonate) to the inside of the caves. Stalactites and stalagmites are formed. The newly added bicarbonate buffers the acid, and the pH increases to 7.2–7.8 (bit.ly/3xlfpPe). This water feeds underground rivers and releases CO2 gas. This can accumulate to toxic levels in the bottom of caves. 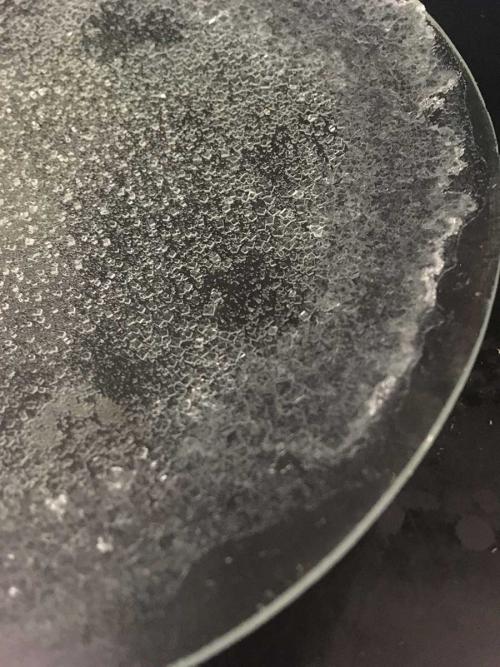 The residue left after evaporating a sample of seawater. Jenny Selinger

Serial equilibria in seawater: the assumed counter ion is Na+. 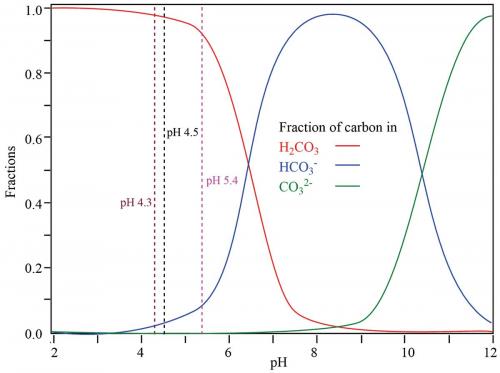 Prevalence of species in seawater: fraction of inorganic carbon as aqueous CO2, baking soda and washing soda as a function of pH, based on the buffer equation: pH = pKa + log ([basic form]/[acidic form])

Because of a multitude of interactions in solution mixtures, chemical species behave experimentally as if they are at a different (often lower) concentration from the actual concentration (bit.ly/37U7Zb8). This is non-ideal. A century ago, a factor called the activity, was introduced; activity is determined experimentally to correct for these ‘anomalies’ (stanford.io/3rNeJAI). A parallel is suggested for a team sport, where substituting a player of apparent equivalent ability, or changing the nature of the spectators, can unpredictably and mightily, change team dynamics and performance. Any change in the composition of (sea)water, natural or artificial, changes all the activities, including the solubility of calcium carbonate.

Lake Nyos in Cameroon had a natural store of water that is supersaturated with CO2 at its base. This CO2 rose to the surface in August 1986, bubbled out and spread overland, killing 1746 people and 3500 livestock. Fast forward to current experiments with underground storage of CO2 in porous rock (bit.ly/2V1FMg5) … is it a long-term solution?