It’s fair to assume that the most likely outcome of a degree in chemistry is a life in the laboratory. While the lab can lead to a lifetime of discovery, chemistry can also open up doors to all sorts of careers. Even international diplomacy.

Dr Hammer completed several courses at the Chemistry Department at the ANU, which at the time was part of the School of General Studies. As an undergraduate he finished courses in chemistry, physics, biochemistry, maths and philosophy, before specialising in inorganic chemistry for his honours. From here Dr Hammer continued his studies at the ANU, completing a PhD under the supervision of Dr Howard Bradbury, in which he worked on the isolation and characterisation of plant proteinase inhibitors.

It looked as though Dr Hammer was building for a long and fruitful career in the chemistry lab. However, after ten years of research, Dr Hammer took a job at the Office of National Assessments (ONA), changing his life forever. This wasn’t a plan, Dr Hammer explains, but one that opened up a world of opportunities.

‘I was happy doing research in chemistry, and was gearing up to get a further postdoctoral position, this time in the US’, Dr Hammer explains. ‘I’ll admit that I was thinking, though, that if I went to the USA I would probably try to stay there where bigger budgets and excitement levels seemed likely. As such a big step approached, I guess my overall attitude towards what I might do next became more labile.’

‘And as it happened, right then, while I was in that zone, I met a person quite by accident at a dinner where, as a result of a bit of a debate ranging from economics to how chemotherapy works – and then some further conversations – I got encouraged to try work at ONA.’

While this was a significant career change, in moving to the public service Dr Hammer was able to directly apply his research skills to very important public policy issues.

‘There was a specific link between my work in chemistry, and science more broadly, and my initial work at ONA’, Dr Hammer explains. ‘At that time, in 1989, the Australian Government – led in this area by Foreign Minister Gareth Evans – was driving an international effort to ban chemical weapons and roll back any further proliferation of chemical, biological and nuclear weapons. My job at ONA was in support of that effort.’

‘My subsequent two jobs with the Department of Foreign Affairs and Trade – one in Canberra, and one posted as a diplomat to Washington – were also focused in this area. Having a science background was extremely helpful – and recognised as such by government and others – to my understanding and development of ideas and policies in relation to trying to stop the spread of these weapons of mass destruction.’

From these early jobs, Dr Hammer built a career in international diplomacy. This has included postings in Washington DC and Tokyo, chairing international meetings of experts in Paris under the umbrella of the Australia Group, and working on the production of the 2000 Defence White Paper. Dr Hammer has now been posted, not just as Australia’s ambassador to Austria, Bosnia-Herzegovina, Hungary, Kosovo, Slovakia and Slovenia, but also as a Permanent Representative to the UN agencies in Vienna, to the International Atomic Energy Agency and to the Organisation for Security and Cooperation in Europe.

Dr Hammer says that in many ways this has been a pursuit in understanding one of the most complex systems around.

‘The international system may be the most complex semi-ordered system human beings have to deal with. So there is a lot of intellectual satisfaction in trying to fathom what’s going on there, discuss that with others on the same team, and try to find ways to take advantage of it.’

Amongst all of this, however,

Dr Hammer has not forgotten his roots at the ANU, stating his studies were integral to his success.

‘I found that the cast of mind I believe attracts people to chemistry and what I learned in chemistry – particularly in research – helped a great deal and still does in all of the jobs I’ve had’, Dr Hammer says. ‘In particular some of the general attributes and elements relating to chemistry that I have found most helpful have been the ability to develop highly analytical and sceptical approaches to problem solving, and the ability to turn abstract ideas into hands-on practical steps.’

While Dr Hammer has had a career of amazing successes, he still has a soft spot for his time at RSC.

‘Doing a PhD in chemistry at the ANU has also been a highlight. I had some fabulous times in the lab, both on the scientific front and socially.

‘There really was a great sense of camaraderie among the research students both in the group I was in and more widely. Having visited RSC a couple of times recently – including Hambly’s bar – I can see that tradition is alive and well!’ 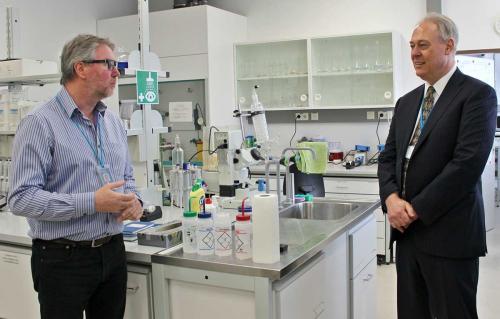 Dr Brendon Hammer (right) talking with a scientist in Seibersdorf, Austria, who is working on tracing the provenance of foods using naturally occurring isotopic ratios.

There was a specific link between my work in chemistry, and science more broadly, and my initial work at ONA.