Next year, the Australian Journal of Chemistry will celebrate 70 years of publishing research papers from all fields of chemical science, with a focus on multidisciplinary chemistry and emerging areas of research.

In 2018, the Australian Journal of Chemistry (AJC) will achieve the milestone of reaching 70. To appreciate where AJC now stands, it is important to understand its roots.

In the aftermath of World War II, there was something of a coming of age in Australia. We had come close to being invaded by Japanese forces during the War, and what had been considered ‘the home country’, Great Britain, had not been able to come to our aid. There was a sense that we had to stand on our own. In the science community, this manifested itself with the establishment of the Australian Academy of Science and the Science and Industry Research Act 1949, the Act under which CSIRO still operates. Scientists of the day were sending the results of their research to British and American journals, but this was a frustratingly slow process, conducted by sea mail. There was a clear need for an Australian publishing capability, but no publisher in the country could cope with the specialist (mathematical, chemical) typesetting needed for physics and chemistry publishing, so the newly formed Academy partnered with CSIRO to establish the Australian Journals of Scientific Research.

From this partnership, the first volume of the Australian Journal of Scientific Research was published in 1948. It consisted of four issues, totalling fewer than 500 pages, publishing papers on both chemistry and physics. Very quickly, the volume of papers received was so great that there was a surplus in content; as a result, this journal split into two distinct publications in 1953 – Australian Journal of Chemistry (volume 6) and Australian Journal of Physics (volume 6), each consisting of four issues a year. Continued rapid growth in submissions for AJC meant that in 1962 there was enough content to fill six, rather plump, issues of the journal, and only two years later, in 1964, there was enough content to maintain publication of 12 monthly issues.

At this time, given the constraints of geographical reach, the overwhelming majority of papers published in AJC were from Australian authors. Disappointingly, many historical records pertaining to AJC have long disappeared; the earliest data I could find were in the minutes of an Editorial Advisory Committee meeting, dated 26 October 1979. That report showed the relative geographical breakdown of authorship: around 85% of published output was from Australia (mostly Australian universities and a few from other Australian institutions and around 8% from CSIRO). The remaining 15% was from authors based overseas. That 15% of overseas content was impressive compared to the other journals published by CSIRO Publishing at the time, which averaged around 10% or less. This led to the conclusion that ‘the journals [particularly AJC] were by no means to be considered “CSIRO house publications”.’

The geographical distribution of published papers changed rapidly when we embraced the internet as a channel to deliver publications, probably the biggest change in publishing since Gutenberg invented the movable-type printing press around 1440, a phenomenon that introduced the era of mass communication, thereby permanently altering the structure of society. AJC was the first Australian journal to be published online, and we did that early – in 1996 – before Elsevier, before Springer, and before Wiley. The web changed the landscape of publishing rapidly – distance was no longer a deterrent to publishing in international journals, and quickly our author composition changed from an Australian majority to one with a truly international flavour. Of course, it also meant that Australian authors had more timely and straightforward options to publish in international journals.

When I starting working on the journal under the stewardship of the infamous John Zdysiewicz (or John Z, as he was affectionately known among his peers), in 1995, as an Assistant Editor, and also as an RACI member, I was interested to find that the only relationship AJC had with the RACI, was a 10% discount offered to personal subscribers. (At that time, personal subscriptions were plentiful, as the journal was print-only and hence not so readily available.) Looking back at that period, I think John Z was instrumental in the connection between Australian chemists and AJC. He never lost an opportunity to engage with established authors and referees or to drum up new ones, he gave and sponsored lectures, he visited departments, he attended conferences, and awarded student prizes. John was a very visible participant in the corporate life of Australian chemistry (Aust. J. Chem. 2010, vol. 63, pp. 1139–40).

Over time, RACI members were offered greater discounts on personal subscriptions in an attempt to further connect the journal to its rightful audience, and in September 2003 an announcement formalising a new agreement between the RACI and AJC was circulated (Chem. Aust. 2003, 9), in which, among other things, heavily discounted (almost 50%) personal subscriptions were offered. At that time, personal subscriptions were rapidly declining, with content available to most readers through institutional online subscriptions. In that announcement, a clear vision for AJC was articulated, and that was ‘to showcase the best chemical science from Australasia to the rest of the world, along with publishing important international contributions’. Further, ‘this arrangement provides another very good reason to remain (or become) a member of the Royal Australian Chemical Institute. We hope that this agreement will enhance the feeling among you, the members of the RACI, that the Australian Journal of Chemistry is your journal’.

Five years later, in 2009, AJC moved from a publishing model with an in-house Managing Editor (Dr Alison Green, who took over the reins when John Z retired in late 2000) to an external Editorial Board under the advocacy of Professor Curt Wentrup. Curt’s views were also consistent with the 2003 vision, which focused on improving the status of AJC at home, and making Australian researchers see the journal as their journal, by forging closer links with the RACI, while maintaining its international impact. Curt was instrumental in further developing our relationship with the RACI back in 2012, when we met with CEO Roger Stapleford to discuss moving forward in cementing a formal relationship. From that meeting, foundations for a mutually beneficial partnership were identified. These include reciprocal arrangements for advertising and home page links, a link from the RACI website to a free monthly ‘teaser’ paper from AJC, space in Chemistry in Australia each month for an article relating to AJC, sharing costs of booths and/or receptions at agreed conferences and publishing papers from RACI prize-winners in AJC.

It has been terrific to see these ideas come to fruition under Curt’s leadership. Sharing the costs of booths (e.g. at the FACS AAC 2013 Meeting, Singapore) and receptions (Pacifichem, Hawaii, 2015) allows us to make the most of our carefully monitored funds in promoting journal content and the RACI to our international friends. The most spectacular outcome of this, in my view, is the ongoing tradition of inviting the recipients of research-related RACI medals and awards to publish an account (highlight), review, or paper of their work in an annual special issue of AJC. It champions our vision of showcasing exceptional Australian science carried out by exceptional Australian chemists.

Following Curt’s groundwork in fostering these strong but informal ties with the RACI, our two current co-Editors-in-Chief, Professors George Koutsantonis and John D. Wade, are committed to finding further ways to strengthen ties with the RACI, and encourage and engage Australian chemists to publish their work in AJC, with the advocacy of a strong and refreshed Editorial Board. To complement their efforts, our recent acceptance into COPE (Committee on Publication Ethics) shows we are committed to best-practice ethical standards, an increasingly important aspect of online publication.

The vision for AJC articulated back in 2003 continues to be accurate – I still see AJC as an Australian journal for Australian chemists. However, I do not think the majority of RACI members feel a sense of belonging to AJC, and I feel the gap is widening, no doubt at least in part due to its perceived low impact and the implications of this low impact with respect to promotions and grant applications. Although we are perceived as being low impact, we publish papers that are highly cited. Graeme Moad, Ezio Rizzardo and San Thang’s landmark review (Aust. J. Chem. 2005, vol. 58(6), pp. 379–410, https://doi.org/10.1071/CH05072), on RAFT polymerisation chemistry, plus three updates, published in AJC between 2005 and 2012, have generated over 3000 citations to date. Four of our top 10 highly cited papers published in 2013 and 2014 were authored by Australian research teams, and have generated an average of 24 citations each.

What can we do to ensure Australians see AJC as an attractive choice for publishing their work? Let’s open the dialogue. I know that many of you care deeply about this. George, John and I welcome your thoughts and suggestions.

Cheers and happy birthday to us! I hope both AJC and RACI have happy and strong futures to look forward to.

Jennifer M. Foster FRACI CChem is publisher of the Australian Journal of Chemistry. 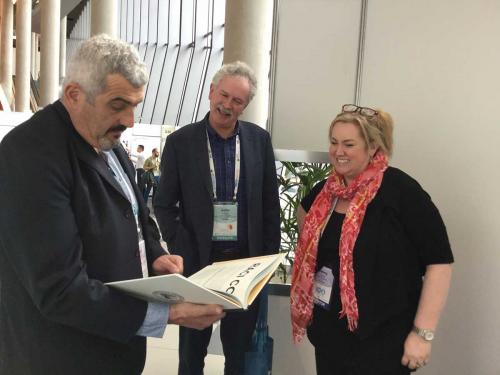 L–R: George Koutsantonis, John Wade and and Jenny Foster at the RACI Centenary Congress in July.