Lancelot and the quest for self-improvement

One source of my early chemical learning was a book entitled Science for the citizen, ‘a self-educator based on the social background of scientific discovery’. It belonged to a school friend and was on more-than-occasional loan to me. It was many years later that I bought (second hand) a copy for myself. The author was Lancelot Hogben, an English biologist and polymath whose academic life marked him as something of a rolling stone. After graduation from Cambridge, he held junior teaching appointments at the University of London’s Birkbeck College and Imperial College, followed by a research appointment at the University of Edinburgh. Onward ever upward, he was Associate Professor at McGill University in Montreal, and then Professor of Biology at the University of Cape Town. He and his wife Enid Charles (biologist and demographer) were uncomfortable with race relations in South Africa and so it was back to England in 1930 where Lancelot was appointed as professor and head of the Department of Social Biology at the London School of Economics (LSE).

The Hogbens wanted their children to be brought up in a rural setting, and so, while the parents worked weekdays in London, a housekeeper looked after the children in a cottage on the edge of Dartmoor. Lancelot and Enid’s left-wing views ensured that the children attended government schools, in quite a contrast with the education of children of other professionals. All four made successful professional careers.

In the mid-1930s, C.P. (Lord) Snow – he of the ‘two cultures’ – introduced a general science paper into the Higher Civil Service Examination, and the director of the LSE, William (later Lord) Beveridge, asked Hogben to teach a course that could help candidates prepare for the examination. Although he was head of the Department of Social Biology and was not obliged to teach because his appointment was solely for research, Hogben accepted the challenge and in 1938 published Science for the citizen for his students.

Hogben left LSE in 1937 to take up an appointment at the University of Aberdeen, but things came unstuck in the early 1940s when he was visiting Norway and had to flee westward in the face of the German invasion. He ended up in America where he accepted a visiting appointment at the University of Wisconsin in Madison. He returned to England in mid-1941 to become professor of biology at the University of Birmingham, while the children remained in the US and graduated from Wisconsin. Their father, however, was seconded to the War Office for a few years as a statistical officer, but he retained his Birmingham appointment until he retired in 1961 to live in Wales.

The chemistry is in Part II, ‘The Conquest of Substitutes’. The first chapter in this section is largely about hydrostatics, the second about the gas laws, and the third about atoms, the gas laws and the periodic table. Finally, in ‘The Last Resting Place of Spirits’, I rediscovered the organic chemistry, with information on substitution and functional groups, and charts showing what can be made from key substances such as methanol, acetone, acetic acid, benzene and toluene. The first three sections conclude with a list of selected references recommended by Hogben (quite possibly Hogben’s sources of the specialist information in his book), but there are no such lists for the biological sections.

Each of the physics and chemistry chapters concludes with a list of ‘examples’, some of which I reckon the candidates for the Civil Service Examination might have found challenging. An example: ‘Compare the properties of four substances of molecular weight 75 having the following percentage composition: oxygen 42.7, hydrogen 6.7, nitrogen 18.7, carbon 32. How would you make each of them?’ Most of the answers for examples in the other sections are numerical and so are easily tucked in at the back of the book but the more discursive answers required for the organic examples are not included, perhaps for reasons of space. 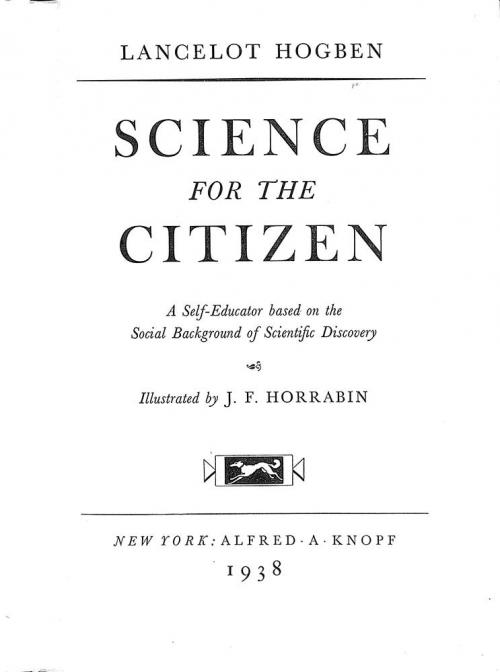 Science for the citizen covers a lot of physics, some basic chemistry and some aspects of biology ...