As a scientist, taking your vocation on vacation reveals some fascinating places. Dave Sammut shares a few of his favourites

Life is short. With only a finite time on this Earth, it’s only natural to conceive a list of things that each of us will seek to achieve in life – in my case, a ‘beaker list’. As scientists, many of us choose for our hobby or holiday those activities that relate to our profession. Here, I describe some of the scientific adventures that I have already had or that are still on my beaker list. They might not all be available right now, but a scientist can dare to dream.

An obvious place to start is at the footsteps of the great scientists before us. Combining travel with deep historical interest, the scientific voyage can be richly rewarding.

According to his writings on a five-year trip (published in 1839 as Voyage of the Beagle), Darwin travelled initially through Brazil, south through Patagonia and Tierra del Fuego. His journals set down his observations on biology, geology and anthropology, with his description of the 19th-century gauchos (cowboys) and the capybara (world’s largest rodent) always coming first to my mind.

Darwin passed through the Strait of Magellan and up the west coast of South America to the Galapagos, where he made his most famous studies of the isolated bird and tortoise populations. He continued his voyage west, to Tahiti, Van Diemen’s Land, the Cocos (Keeling) Islands and Mauritius, before returning to England.

I would love to recreate that voyage – among others - but five-year voyages might be a bit expensive. Darwin funded his travels from his twin access to the vast Wedgwood fortune (see March 2016, p. 20). His mother was a Wedgwood, as was his wife – Darwin’s first cousin.

Science can be found in almost any travels. On a recent visit to Venice, my family and I spent a fascinating half day on a boat with the Italian equivalent of a CSIRO scientist. Our private tour included in-depth discussions of the geology and ecology of the Venetian lagoon, and visits to the Arsenale (the historic boat factory) and MOSE Project, an ambitious project of sea walls that can be raised to protect Venice from extreme high tides.

Opportunities for science-based tourism are growing. National Geographic and New Scientist run scientific tours worldwide, with a focus on ecology and nature. I would be particularly keen for the Galapagos tour, and to marvel at the sight of the blue whale (see box). And who could possibly fail to be fascinated by Earth in all its power? One day, I will definitely visit one of the great volcanoes, for which there are any number of choices. Mt Etna, in Italy, is the world’s longest- and most frequently erupting volcano, but I like the sound of Pacaya, approximately two hours from Antigua, where you can hire a horse and guide, and the guide brings marshmallows.

And no mention of volcanism would be complete without a visit to the Darvaza gas crater in Derweze, Turkmenistan. Known locally as ‘the Gates to Hell’, this is a collapsed gas field forming a crater 30 metres across, which burns continuously in the middle of a desert. Apparently it is an extraordinary camping spot, fire supplied.

While we were in Canada, my wife Chantelle and I at least did manage to go fossil hunting in the Alberta badlands. Chantelle was a natural, while all I could really spot were rocks. It is an experience that we can recommend to the visitor, as is the wonderful dinosaur museum in the town of Drumheller, Alberta.

People travel the world to see the colours of nature, such as the bubblegum pink waters of Lake Hillier, Western Australia, or the turquoise caldera that is Kawah Ijen Lake, Indonesia. The aurora borealis draws people to a ring at around 20° off the magnetic north pole, and the fortunate enjoy the rare combination of clear weather and high solar activity to see something more than a dim glow.

While in the northern latitudes, I would have to stop and see the lakes of frozen, combustible methane in Lake Abraham in Alberta, Canada. The methane comes from the bacterial decomposition of plant materials, and the bubbles become trapped like broad jellyfish in and under the winter ice. Come spring, nobody wise lights a match.

Firmly on my list are the events when nature brings animals together in seasonal abundance. I once stood in rural New South Wales and watched fruit bats fly in a horizontal column about a metre square, which crossed continuously from one horizon to the other for nearly half an hour – uncountable thousands of animals. And in New Brunswick, Canada, I saw the garter snakes swarm so thickly – like a vast, writhing carpet – that it was virtually impossible to lay a foot on clear ground. How magnificent it would be to see the migration of the Christmas Island red crab (Gecarcoidea natalis), coral spawning on the Great Barrier Reef, or the glowing bioluminescence of the Indian Ocean phytoplankton around the Maldives.

Having a particular love of dark, confined spaces, I’d be keen to take another ‘blackwater rafting’ trip at the Waitango cave system, south of Auckland. The luminescent blue dots of the cave worms above were like living constellations lighting the way. I would have happily spent an hour sitting alone in the darkness, simply contemplating the beauty. And if they ever drain it again, it would be an adventure of a lifetime to see the Giant Crystal Cave of the Naica mine in Chihuahua, Mexico. With selenite crystals up to 12 metres in length, it was reportedly beautiful but inhospitable: up to 58°C and 95% humidity.

While in New Zealand (near Malborough), I would stop to contemplate the visible strata of the K-T boundary – the high-iridium layer marking the distinction between the Cretaceous and Tertiary (now more correctly called the ‘Palaeogene’) periods, and the likely asteroid strike that blanketed the globe in debris. Then I’d have to visit the actual crater site on the opposite side of the globe, in the Yucatan Peninsula, Mexico.

A well-connected scientist might be able to see Mendeleev’s original periodic table at the Russian Academy of Science in St Petersburg (see May 2014, p. 34). Good connections might grant access for a visitor to the ITER, the large-scale nuclear fusion experiment in Saint-Paul-lès-Durance, in Provence.

My own beaker list includes any number of industrial landmarks. I once had the opportunity to stand near an electric arc furnace as it fired up a melt of scrap steel. With a deafening roar, a lightning maelstrom sent bouts of flame and dust to gigantic collectors, as waste was returned to the useful metal cycle. It would be amazing to visit the world’s largest blast furnace, POSCO’s Gwangyang Steelworks in South Korea. The potline of even a medium-sized aluminium smelter is spectacular on a hot day. And I would give a great deal to experience the bottom of the world’s deepest mines: the Mponeng and TauTona gold mines in South Africa, both having burrowed approximately 4 kilometres into Earth’s crust, which is typically 37–38 kilometres thick in South Africa. Even at that depth, the temperature is already as much as 65°C, requiring air conditioning to make it tolerable for the hard-working people who brave those conditions.

With the very best connections, it might just be possible to lay eyes on the International Prototype Kilogram, the platinum–iridium bar that is becoming redundant as the definition of all mass (see p. 28). More realistically, some of the great artefacts can be viewed from the comfort of your living room. Just as an example, the NSW State Library offers the opportunity to read online the diary of Joseph Banks from the HMS Endeavour (bit.ly/2pALa7O), while the full text of Banks, Darwin, Lavoisier and others can all be found on Project Gutenburg (gutenberg.org).

On the even more exotic scale, there remain the great adventures at the frontiers of the world. Deep sea and space tourism are both anticipated in the near future.

Popular Science reported in 2017 the development of the first vessel slated to take tourists to the wreck of the Titanic, at a depth of 3.8 kilometres. My preference would be to visit the teeming islands of life at the deep-sea volcanic nodules (see October 2015, p. 22).

But more than any other wish, I would choose to make that trip to space. Were I 25 years younger (and not a husband or father), I would already have volunteered for the one-way mission to Mars. That being off the table, and there being no available Wedgwood heiresses to fund my adventures, I’m just saving my pennies.

There are a hundred things that I would love to do before I make some fatal slip-up in the lab (Note to self: always add acid to water, not the other way round), far more than I can cram into this article. We live in a vast world with endless possibilities to learn – what better reason to be a scientist? There is more than I can ever see, but I can at least take joy in the fact that my beaker list will always be at least half-full.

Dave Sammut FRACI CChem, MRSN is the principal of DCS Technical, a boutique scientific consultancy, providing services to the Australian and international minerals, waste recycling and general scientific industries. Thanks to Chantelle Craig for the extensive research that went into this article.

In search of the Leviathan

Almost every child is fascinated with dinosaurs at some point, particularly the titanosaurs and larger therapods. But the blue whale (Balaenoptera musculus) has always held a special place in my imagination. The largest animal known to have lived, peaceful and majestic, the biggest blue whale ever recorded weighed in at 173 tonnes, 30 metres in length.

I was once visiting the town of L’Anse aux Meadows, at the northwestern tip of Newfoundland, Canada. Blue whales are known to frequent the Atlantic waters between there and Greenland, and I had hoped that I might be able to take advantage of my trip to tick an item off my list. I spoke to a local whale boat operator, delighting in the distinctive, almost Gaelic lilt of his replies.

‘I was wondering if you’ve seen any whales lately?’ said I.

‘Have you seen any blue whales of late?’, I said with an ember of hope.

‘Blue whales … That would be the one with the heart the size of a Volkswagen?’

‘That would be the one with an aorta that a child could crawl through?’

‘YES!’, I said with growing excitement. This man clearly knew his whales.

The Newfoundlander humour is subtle, but it can be devastating. 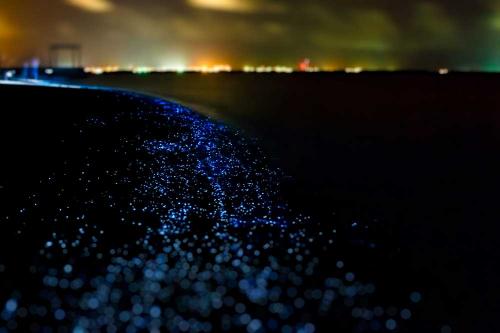 During bioluminescence, for example of dinoflagellates in the Maldives, an enzyme catalyses the oxidation of luciferin. 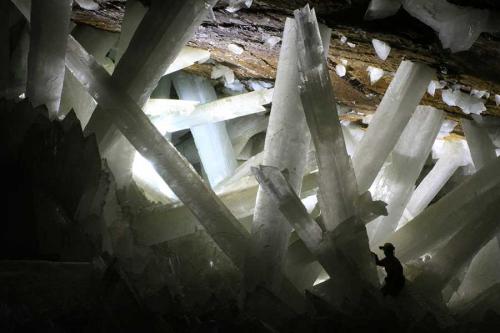 Selenite crystals of the Naica Mine in Mexico, which mines lead, zinc and silver. 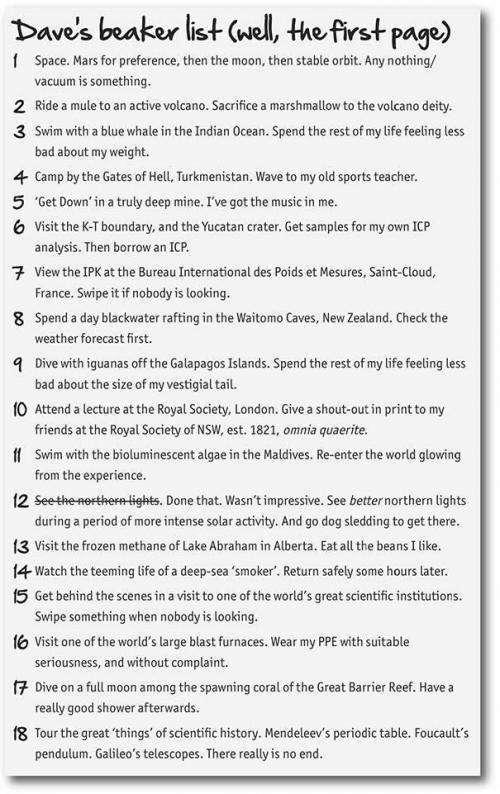 ... I like the sound of Pacaya, approximately two hours from Antigua, where you can hire a horse and guide, and the guide brings marshmallows.

Were I 25 years younger ..., I would already have volunteered for the one-way mission to Mars.