When I was an undergraduate at the University of Melbourne in the late 1950s, and for some years afterwards, there was a strong ‘chemical’ smell in the foyer of the Chemistry building. Nobody seemed to worry about it – chemistry departments just smelled like that. Years later, when I was at Monash, the staff working in the chemistry store complained about the smell, on the grounds of amenity, of course, but also on health grounds. Were they being slowly poisoned as they went about our business?

Roger Brown and I were instructed to find out what the problem was and then do something about it. We toured the shelves where chemicals were stored, first identifying some smelly spots and then examining the individual bottles to find the sources. What we found was that the contents of a number of bottles had caused the corks (yes, the bottle were that old) to rot away and so release the vapours that were leaking into the airspace. Even plastic stoppers and screw tops in some cases had been degraded and cracked. Amines of various kinds seemed to be the most aggressive substances and most of them had strong and not altogether pleasant odours. Rebottling and resealing the containers fixed the problem and gave the staff some respite. It took a while for the air to clear, but the smell never went away entirely, so Roger and I had to go back for another nose-patrol. A second round of rebottling brought the problem to an end.

Chemists, at least organikers like me and Roger, are supposed to have good senses of smell, and I have heard of chemists being employed to sniff the fractions as they come out of the gas chromatograph with a view to identifying them or at least judging if they could be useful perfumery constituents. Animals are better at it, and I have from time to time encountered dogs at airports that had been trained to sniff out illegal substances. Military and police organisations use dogs for the detection of explosives and are employed by disaster relief personnel to help find people buried by landslides, avalanches and building collapses, especially those caused by earthquakes as we saw recently in the news from Italy. Sniffing out buried bodies is another task that authorities assign to dogs.

Last year I was at a reception where the man sitting next to me had a dog garbed in a coat with a logo I did not recognise but clearly one that suggested it was a working dog. The man seemed to have excellent eyesight, so I concluded this was not a seeing-eye dog, but it was clear the dog was not just a pet. In response to my inquiry, I was told it was a diabetes dog that was trained to detect, from the man’s breath, when his blood glucose level was dangerously low. ‘He sleeps with me’, the diabetic owner said, ‘and he will wake me if he detects a dangerous change in my condition’. Some dog! Once awakened, the owner can check his blood sugar level and take appropriate action to get back into the safe zone. A can of soft drink usually suffices to bring the glucose concentration up to a satisfactory 4 mmol/L (about 70 mg/dL). Clinical chemists seem to like the decilitre, perhaps because the numbers are convenient to work with. When I looked in my personal pathology file I found that although most of the volume units were litres, there some exceptions: haemoglobin (normal range 11.5–16.5 g/dL) and cholesterol (200 mg/dL seems to be a dividing line).

The substance that diabetes dogs are detecting is most likely acetone that is formed from acetoacetic acid and β-hydroxybutyrate, in turn formed by degradation of fatty acids and deamination of amino acids. These processes come into play when there is insufficient glucose available for energy generation in the body, and characterise a condition known as ketoacidosis.

In the comics and teenage literature that I read as a boy, school classes in chemistry were always described as ‘stinks’. The implication is that chemistry is associated with bad smells, and that could relate to the production of hydrogen sulfide in simple school experiments. The Royal Society of Chemistry encourages schools to use odours in a module – its title is a play on words, ‘Chemistry stinks’ – that includes natural products like carvone, vanillin and limonene. So good stinks are OK, especially in the food industry. At the Nestlé headquarters in Vevey, Switzerland, there are ‘smelling sticks’ to give us the aroma of chocolate, coffee, cinnamon and other inducements to consume. 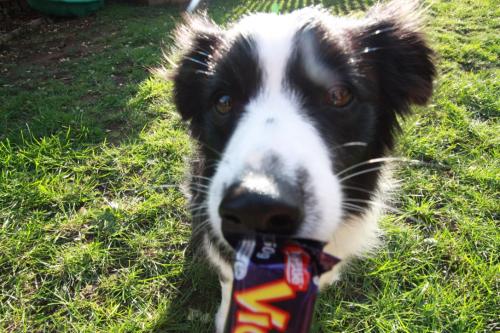 The substance that diabetes dogs are detecting is most likely acetone ...