To celebrate its 70th birthday, the Australian Journal of Chemistry has released a special online collection of published papers. CSIRO Publishing’s Jennifer Foster highlights some of the selections.

Milestone birthdays deserve appropriate celebrations. At his 80th birthday a few years ago, surrounded by close family and old and new friends, my dad* gave a speech that included reflections on the highlights during his lifetime, describing how the people in his life had influenced and shaped those highlights. In pondering a fitting celebration for the Australian Journal of Chemistry’s recent 70th birthday, reflecting on the highlights of its lifetime seem an equally fitting way to celebrate – surrounded by friends and family and reflecting on how its scope, its future directions and its reputation have been moulded by its authors over the past 70 years. To do this, we created a virtual issue (www.publish.csiro.au/ch/virtualissue/2482) – a free online collection of 12 papers showcasing the best chemical science from Australasia, along with publishing important international contributions, to share with our chemistry friends until 30 June 2019.The selection of the papers for this virtual issue by AJC’s Editorial Board was largely subjective – choices were informed by hard data (citations and downloads), but also by diversity in topic and in authorship. There are many papers that one could argue could and should have made the list but didn’t. The paper that first and foremost comes to my mind is the famous (and freely available) series of RAFT Reviews by CSIRO RAFT inventors Ezio Rizzardo, Graeme Moad and San Thang. The first of these (Aust. J. Chem. 2005, vol. 58, pp. 379–410), plus three subsequent updates, have accrued more than 3500 citations to date, with the original attracting more than 1600, the most amassed by any paper published in AJC. The contents of the Reviews were largely based on the work of these authors, which with related work was largely responsible for the transformation of free radical polymerisation to the great activity we see today. Such was the impact of their work that Rizzardo, along with David Solomon, shared the 2011 Prime Minister’s Prize for Science, and the CSIRO group were contenders for the 2014 Nobel Prize.

In short, RAFT polymerisation put Australian polymer science at the forefront of research into free radical polymerisation. However, because Reviews attract a disproportionally high number of citations, the Board decided against their inclusion in the Virtual Issue. They do, however, deserve a gong in their own right.

One of the outstanding challenges in the RAFT area is the design of RAFT agents capable of controlling monomers with distinct reactivities. Included in this collection is a landmark paper by Michelle Coote and co-workers (Aust. J. Chem. 2005, vol. 58, pp. 437–41) describing a viable synthetic route to a novel class of RAFT agents bearing a fluorine Z-group. Such F-RAFT agents are predicted to allow living free radical polymerisation of various monomers without affecting the rate of polymerisation, and should also facilitate the construction of block copolymers from monomers with disparate reactivity.

Indeed, modern polymerisation techniques have revolutionalised chemists’ ability to create materials with tailored properties, but these synthetic capabilities are still far outstripped by nature’s. As scientists try to synthesise more complex materials, the challenge to do so by traditional synthetic methods is hugely significant. Recent research has taken inspiration from the way that nature builds well-defined and complex structures through the self-assembly of smaller molecules. This ‘bottom-up’ approach has proved to be the most promising route to design materials with structures controlled at the nanoscale. In their paper ‘Synthesis of self-assembling cyclic peptide-polymer conjugates using click chemistry’ (Aust. J. Chem. 2010, vol. 63, pp. 1169–72), Chapman, Joliffe and Perrier demonstrate that click reactions enable the conjugation of polymeric chains to cyclic peptides, and that the resulting conjugates show natural self-assembly into nanotubes.

All authors featured in this collection are international figures in chemistry, but many also dedicated themselves to the Australian research community as mentors for the next generation of this country’s scientists. Arthur Birch was one such figure, perhaps best known for the reaction that bears his name, the Birch reduction of aromatic compounds by solutions of sodium and ethanol in liquid ammonia. This process has wide application, most notably in the commercial synthesis of oral contraceptives, giving rise to his title ‘the father of the pill’ (www.science.org.au/fellowship/fellows/biographical-memoirs/arthur-john-b...). His seminal but lesser known work towards the polyketide theory, written with Frank Donovan, which accounts for the biosynthetic origins of a wide range of natural products, including many of the important antibiotics used in human chemotherapy today, was published in AJC in 1953 (Aust. J. Chem. 1953, vol. 6, pp. 360–8) and appears in this collection. In short, it supports the hypothesis that the molecules in that study are elaborated, at least in part, by the head-to-tail linkage of acetate units.

Sir John Cornforth was a year behind Birch at the University of Sydney and followed him to Robinson’s laboratory at Oxford. Cornforth’s successful studies at Sydney were achieved under difficult conditions. He was deaf, so could not attend lectures, and instead learned German so that he could read the original literature. Those who knew him described him as a colourful character, who was well known for his quick wit. Cornforth received the Nobel Prize in Chemistry in 1975 for his work on the stereochemistry of enzyme-catalysed reactions, and is still the only Australian chemist to have received that accolade. His outstanding prose makes the paper ‘The trouble with synthesis’ (Aust. J. Chem. 1993, vol. 46, pp. 157–70) a delight to read.

Rodney Rickards joined Birch in Manchester in 1956, the same year he published his first paper in AJC. Ironically, Rod, then at the ANU, had just completed a biographical memoir of Birch (with Cornforth), when he died suddenly at home in December 2007. Rod was known for his outstanding achievements in the organic and biological chemistry of compounds of medical, biological, agricultural and veterinary importance, encompassing a remarkable breadth of chemistry and diversity of structural types. One of his papers, featured in this compilation (Aust. J. Chem. 1989, vol. 42, pp. 717–30), presents a very early example of using a chiral solvate of known configuration to set the absolute configuration of a natural product using X-ray crystallography.

In physical chemistry, McNeill and co-workers (Aust. J. Chem. 1963, vol. 16, pp. 1056–75) from the CSIRO Division of Physical Chemistry authored a landmark series of papers appearing in AJC, predating the work of Heeger, MacDiarmid and Shirakawa, who were eventually awarded the Nobel Prize in Chemistry in 2000 for the discovery and development of conducting polymers. The first of these papers, ‘Electronic conduction in polymers. I. The chemical structure of polypyrrole’, appears in this collection.

The use of computational techniques in chemistry is undoubtedly very important, and growing. A relatively early study by Patricia Hunt (Imperial) and Barbara Kirchner (Bonn) (Aust. J. Chem. 2007, vol. 60, pp. 9–14) on using computational techniques to understand the properties of ionic liquids is included for its historical value. Certainly, computational techniques have moved on in the last 10 years, and while some subsequent studies appear to agree with all the findings, some agree only with parts of it. Those in the field will no doubt continue to discuss what is ‘correct’, as understanding ion pairing remains a very hot topic in the field.

A paper of immense historical significance entitled ‘Internal rotation in some organic molecules containing methyl, amino, hydroxyl, and formyl groups’ by Leo Radom and Sir John Pople (Aust. J. Chem. 1972, vol. 25, pp. 1601–12) was published in the very early days of combining quantum chemical methods with computers in order to solve chemical problems, and these calculations were carried out on early mainframe computers with punched cards. It was one of the very first systematic explorations of conformational energies of organic molecules using quantum chemical methods. These studies became more and more sophisticated (and popular) with the advancement of theoretical procedures and supercomputers, and eventually contributed to Pople’s Nobel Prize in 1998.

Enriching this collection of papers is the synthetic masterpiece by Alan Sargeson and co-workers (‘Mono- and bis(2,2'-bipyridine) and (1,10-phenanthroline) chelates of ruthenium and osmium. IV. Bis chelates of bivalent and tervalent osmium’, Aust. J. Chem. 1964, vol. 17, pp. 325–36), with no less than 50 compounds reported. This paper was a very important contribution to the understanding of osmium ligand substitution reactions. At the time, crystallography and NMR spectroscopy were far less accessible than they are today, and the authors used more traditional methods of characterisation including UV–vis, elemental analysis and conductance measurements.

Another article continuing the theme of Australian inorganic chemistry, authored by Michael Bruce and Neville Windsor (University of Adelaide) (Aust. J. Chem. 1997, vol. 30, pp. 1601–4), paved the way for the organometallic chemistry of cyclopentadienyl ruthenium bis(phosphine) moities as a consequence of its simplicity and efficacy. Prior to the publication of this paper, the title compound was only accessible by far more tortuous routes, and in poorer yields. In essence, the synthesis of cyclopentadienyl ruthenium(II)-bis(triphenylphosphine) chloride is a one-pot reaction from which the product crystallises in quantitative yield, and has led to thousands of papers using this complex.

Starting in 1970, Richard Robson (University of Melbourne) developed new types of ligands, based on Schiff-base chemistry but now known as Robson ligands, that were, for the first time, rationally designed to bind to two or more metal atoms in close proximity. This paper (Aust. J. Chem. 1970, vol. 23, pp. 2225–36), the third in the series, reported the first macrocyclic binucleating ligand, and thus was a landmark achievement in the synthesis of polynuclear metal complexes.

It would be remiss to complete this historic collection without including a paper authored by Allan White. In addition to being a talented organist, Allan was an ISI Highly Cited Scientist, publishing nearly 1850 scholarly articles (643 of those appearing in AJC) containing over 5000 structure determinations. Allan possessed a trademark reluctance to publish material until late in the project, when it could be appreciated in its entirety. Work was usually submitted as one colossal paper (we called them ‘bricks’) that told as much of the story, as completely as possible, in one hit. With some journals, this approach caused difficulties with indigestibility in refereeing and the editorial process. With the guidance of editors Bob Schoenfeld and John Zdysziewicz, numerous ‘bricks’ found a home in AJC on a regular basis throughout the 1980s and 90s. His paper on structural studies in the 1 : 1 copper(I) halide–pyridine base system (Aust. J. Chem. 1977, vol. 30, pp. 1937–45) accurately reflects the chemistry Allan was doing.

It’s worth reflecting on why we have an Australian Journal of Chemistry and how much we care about its future. I hope it reminds you of the people who were, or still are, longstanding supporters of the journal throughout their careers.

My dad concluded his 80th birthday speech by thanking his family and friends for sharing his special celebration, and his life. On behalf of AJC’s past and present editors, thank you to those who have helped shaped our beloved journal over the last 70 years. Here’s to the next 70! 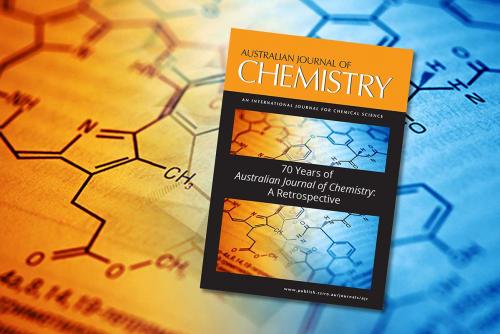 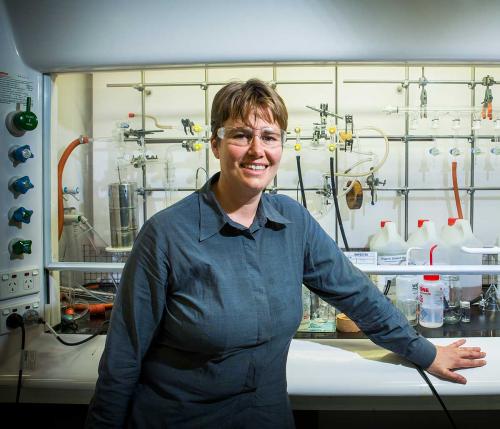 Michelle Coote, co-lead author of the F-RAFT paper and a past associate editor of AJC. 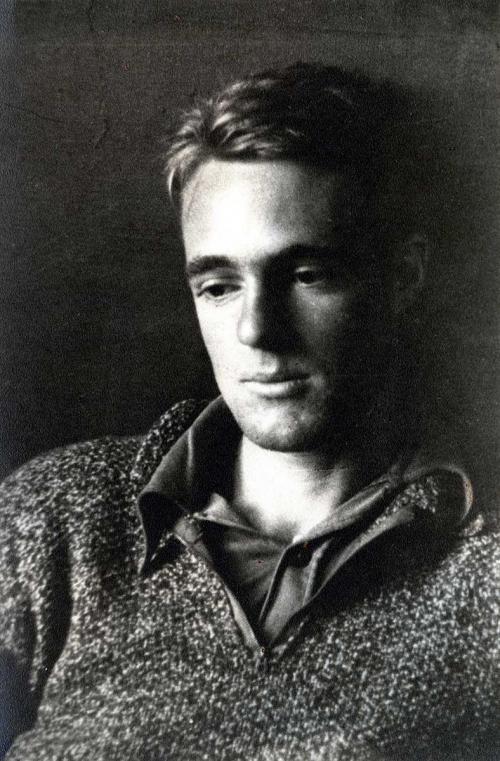 John W. Cornforth as an 18-year-old student. Photo by his friend Dick Welsh, from the family album of daughter Philippa Cornforth.

Cornforth received the Nobel Prize in Chemistry in 1975 for his work on the stereochemistry of enzyme-catalysed reactions ...