Towards outsmarting the wily fox: The chemistry of odours

As efforts to keep foxes out of Tasmania continue, local researchers are looking at the chemistry of fox secretions as a potential method of control.

Central to the typical nose-to-tail greeting of foxes is the ‘violet’ gland on the tail. This specialised organ, colloquially named for the distinctive floral scent it produces, is probably a significant source of chemical communication. The chemistry of this gland was first studied in the 1970s, and very little further work had been done until recently.

The red fox (Vulpes vulpes) is a major feral pest globally and nationally; Tasmania is the only Australian state or territory that is fox free, because of its geographical isolation. Interest is increasing in the possibility of controlling foxes and other feral animals using the chemical secretions they use to communicate with each other.

Chemicals detected by olfaction (odorants or scents) are a primary source of information about the external environment for most animals. Scents include semiochemicals, which carry specific information between members of a species. Pheromones are a subset of semiochemicals that elicit innate responses, while other semiochemicals produce learned responses. Scents characteristic of a species can come from specialised glands, urine, faeces, general skin secretions and breath.

Chemical signals work between species as well as within members of the same species. There can be fatal consequences for any species not at the top of the food chain, because these signals alert predators to their presence. Dogs in a fox hunt can detect and track the characteristic scents from great distances. The signals can also alert prey to predators. Specific ‘predator odours’ have been explored to deter prey species in both domestic and agricultural settings. At the Seventh International Symposium on Olfaction and Taste in London in 1980, E. Vernet-Maury reported identifying 2,4,5-trimethylthiazoline (TMT) as a specific fear-inducing odorant in fox faeces, and this compound became widely known as ‘fox odour’. As a result, 71 behavioural studies have been carried out using TMT on prey species. However, more recent work using captive foxes (bit.ly/3r848jX) struggled to confirm the original finding and we were also not able to detect TMT in faeces of Australian feral foxes.

The identification of distinctive chemical secretions in an animal species suggests that they have a communication role, but confirmation requires behavioural studies, which can be a daunting task, especially as scents may act in combination. Much of the research in this area has been done on laboratory mice and rats, because of the relative ease of behavioural experimentation, whereas behavioural studies on larger animals are undertaken less frequently. Nevertheless, knowledge of animal scents may ultimately help in mitigating the problem of invasive feral species. For example, species-specific attractants can be added to poison baits, compounds indicating a dominant animal can be used to deter subordinate animals, and specific sex attractants could be used to disrupt mating behaviour. Pheromone-based methods are well established for insect pest control, and there is a case for developing additional, novel, methods of vertebrate pest control.

Scents other than pheromones may also provide effective methods of mitigating the damage caused by pest species. An indirect approach using false scents has been found to protect shorebirds from mammalian predators on Mackenzie Basin on New Zealand’s South Island (bit.ly/3HX3ZH9).

Investigating the chemistry of the fox violet gland at the University of Bristol in the 1970s, E.S. Albone (go.nature.com/3GfXgYp) identified three ultimately plant-derived carotenoid breakdown products: dihydroactinidiolide (1), 2-hydroxy-2,6,6-trimethylcyclohexanone (2) and 4-oxo-β-ionone (3). These norisoprenoid compounds and/or their precursors can be derived directly by sequestering carotenoids through ingestion of plants, or indirectly through prey. The fox diet contains significant amounts of plant material, especially fruits, which are rich in carotenoids, essential for animal vision and general health. The expression of carotenoid-derived scents may act as a reliable signal of good nutrition, an important factor in mate choice. This phenomenon has been found to occur in birds in which dietary carotenoids provide the pigments that colour their skin and feathers. A good colouration enhances their attractiveness for mating (bit.ly/3tgEVH0).

At the University of Tasmania, we undertook a comprehensive analysis of the gland volatiles (bit.ly/3K2ptUD). This study confirmed the findings of Albone, and added a further 12 identified norisoprenoids and other carotenoid degradation products. These included β-ionone (4), 2,6,6-trimethyl-2-cyclohexen-1-one (5), cyclic β-ionone (6), β-cyclocitral (7), geranyl acetone (8), 6-methyl-5-hepten-2-one (sulcatone) and 3,3-dimethyl-2,7-octanedione. These mostly occur as floral volatiles, some are known as insect pheromones, but others have never been reported before from any animal or insect. 3,3-Dimethyl-2,7-octanedione is a particularly rare compound in nature, and was present in all samples in reasonable abundance. Other compound classes contributing to the violet gland chemistry profile are alkanes, alcohols, aldehydes, monoterpenoids, lactones, volatile fatty acids, longer chain fatty acids and their esters. In total, we identified about 100 compounds. Several of these have been reported as signalling compounds in other mammals. It is worth noting that odour perception thresholds of individual volatiles can vary by many orders of magnitude, so that a very minor component of the secretion may be a major component of the odour, making mammalian pheromone research very challenging.

Fox urine is an important part of a fox’s territorial marking, and four urinary volatiles were identified more than four decades ago (bit.ly/3HPFITe); we have further investigated this source of volatile scents (bit.ly/3qeUQnl). We characterised more than 60 compounds by gas chromatography–mass spectrometry after headspace solid-phase microextraction of urine from 15 predominantly male foxes and stir-bar extraction of urine from four foxes. Sulfur compounds are known to generally have extremely low odour thresholds, and are common in mammalian urine. Sixteen organic sulfur compounds were found, but not all were detected in all animals. They include dimethyl sulfide (9), dimethyl trisulfide (10), benzothiophene (11), benzyl methyl sulfide (12), 1-octanethiol (13), 1-phenylethyl methyl sulfide, 2-phenylethyl methyl sulfide and 3-isopentenyl thiol. The last five of these had not been reported from any other mammal or previously from fox urine. Other compound classes in the urine were alcohols, aldehydes, amines, fatty acids, ketones, lactones and esters. Acetophenone was the only compound found in all urine samples, was a major component of most, and has been widely reported as a mammalian pheromone. There was an extremely wide variation in the presence and proportions of compounds in the different urine samples, but we were unable to differentiate between sexes because only two foxes were female.

Animal fur absorbs sebaceous skin gland secretions, so we also analysed fur extracts from different body areas to identify these (bit.ly/3HX4fWB). Skin waxes can moderate the release rate of the more volatile compounds, analogous to the inclusion of natural or synthetic ‘fixatives’ in perfume formulations. Through both gas and liquid chromatography coupled to mass spectrometry, the fox waxes were found to be dominated by alkane-1,2-diol esters. There were three distinct types: monoesters with a volatile C5 acyl group at C1, diesters with a second longer chain acyl group at C2, and diesters where both hydroxyl groups were esterified to longer chain fatty acids. After hydrolysis, 34 diols were detected, ranging from 16 to 25 carbons, with iso- and anteiso-branching as well as unbranched chains; the branched chains were by far the most abundant, with C18–C21 diols dominating the distribution.

About 100 fatty acids were detected in the hydrolysate, dominated by the volatile tiglic and isovaleric acids, and then mainly saturated C12–C28 branched and straight-chain fatty acids. A quarter of these had seldom-reported dimethyl branching, several were novel fatty acids and others were unreported in animals. These diol and fatty acid permutations create thousands of individual wax components, although the bulk of the wax can be assigned to a much smaller subset. The waxes in the tail fur over the violet gland differed significantly from the general body fur, with almost all of the former containing one C5 acid.

A representative example is the tiglate/palmitate ester of isononadecane-1,2-diol (14). The presence of volatile fatty acids in the waxes raises the possibility of whether subsequent hydrolysis could ultimately release them as chemical signals. Alkane-1,2-diol esters are known in the sebaceous skin secretions of several animals, including dogs, and in humans in the vernix caseosa, the lipid film that protects the foetus. However, tiglate wax esters do not appear to have been reported from any other animals.

Our findings may lead to the development of novel methods of fox control. In contrast to those of insects, mammalian pheromones and scents generally are largely unexploited for management purposes. This is because mammalian olfactory responses are more complex, and are subject to many modifiers from the individual (age, sex, reproductive status) and social context (status, group). Mammalian responses are also affected by other sensory inputs (e.g. vision) and their experience and learning. For example, experiments with predator scents have found that prey species can actually be attracted to the area, perhaps an example of ‘keeping your enemies closer’.

The exploitation of scent chemistry will require close collaboration between chemists and ecologists, especially those concerned with animal behaviour (ethologists). The rewards for successful control methods for foxes (and perhaps other invasive species) will be considerable.

Why ARE foxes so smelly? (Part 2) (Wildlife Online): www.wildlifeonline.me.uk/questions/answer/why-are-foxes-so-smelly-part-2

Adjunct Professor Noel Davies FRACI CChem and Dr David Nichols MRACI CChem are at the Central Science Laboratory and Emeritus Professor Stuart McLean is at the School of Pharmacy and Pharmacology, University of Tasmania. 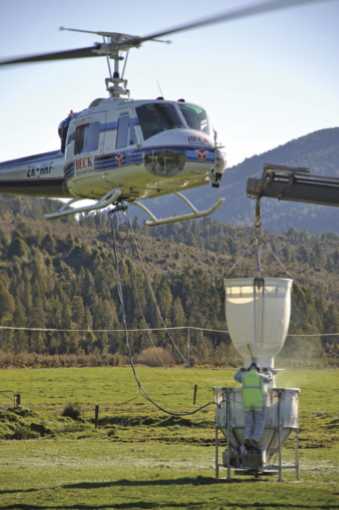 Workers fill a monsoon bucket on a helicopter with 1080 pellets to kill possums near Greymouth, New Zealand (c. 2009).

Australia spends considerable amounts on managing invasive species, although detailed expenditure data is difficult to obtain. For vertebrates, the national total can be estimated at about $1.9 billion in 2011–12 (bit.ly/3HVwAMG). The recent mouse plague in New South Wales cost $1 billion.

Foxes prey on wildlife, livestock and domestic animals, and spread disease and weeds. They quickly adapt to urban environments and are well established in all mainland state capital cities – there are an estimated 16 foxes per square kilometre in Melbourne (bit.ly/3r7NzVj). The economic cost to Australia is more than $200 million annually. Populations are currently controlled by licensed hunters, trapping and the use of poison baits, typically ‘1080’ (sodium fluoroacetate). Poisoning is the most effective control measure but has many problems, especially the unintended death of wildlife and domestic animals. The Victorian fox bounty scheme paid $10 each for almost a million fox scalps over 10 years from 2011, although shooting alone is unable to control the large fox population now present. Effective control of pest animals requires the integration of several methods using different approaches.

New Zealand is plagued by feral mammals, including rodents, stoats, ferrets, weasels, cats and brushtail possums, and in 2017 the NZ Department of Conservation released a 57-page report with more than 400 references on mammalian pheromones and the potential opportunities for their use in feral pest control (bit.ly/3HQttWv). 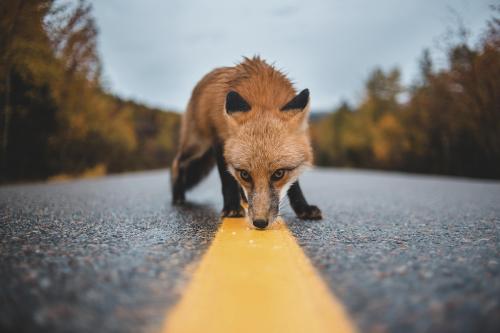 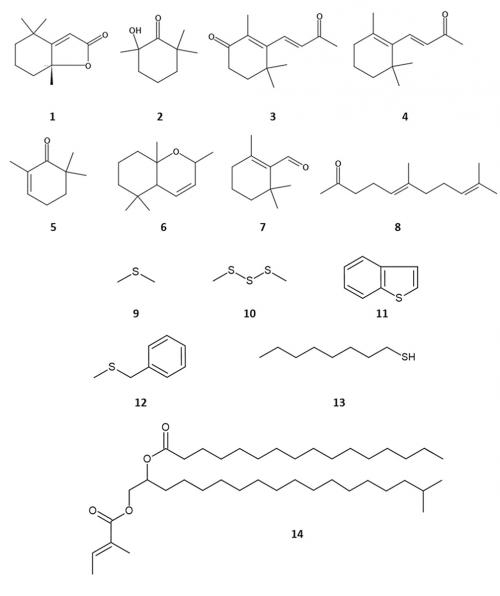 Compounds from fox violet gland (1–8), representative sulfur compounds from the urine (9–13) and an example of a skin wax ester (14). 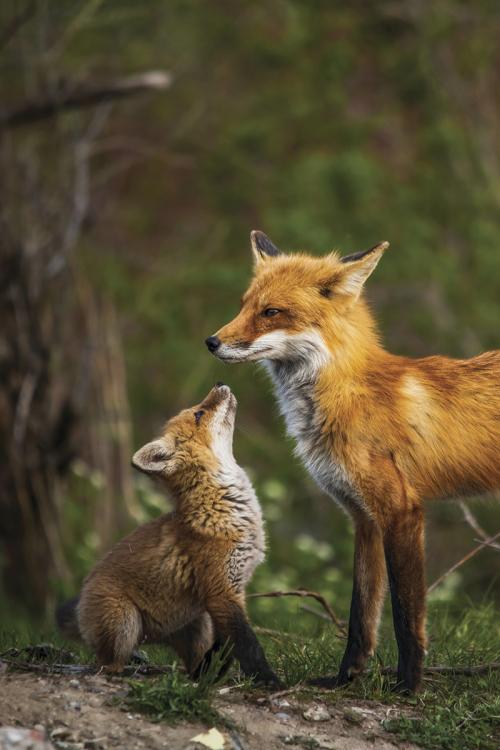 Most mammals rely on pheromones to maintain their social structure and to locate potential mates, and foxes are no exception.