It’s shortly after Australia Day, and a new invasion looms on the borders of Europe. Over recent years, world powers have appeased hostile foreign dictators while eastern lands have been invaded and annexed. And the heavy threat of conflict casts a pall over the entire Asia–Pacific, with Australia once again at risk of being dragged into someone else’s war. It looks as though 1937 has returned, and we haven’t learned a single damn lesson.

How does Australia stand in the face of that conflict? For that matter, how do we stand against the threat of just being cut off: by sanction, by pandemic, by natural disaster, even by simple accident? We’re an island. Virtually every tonne of our exports (which are mostly composed of various types of dirt), virtually every tonne of the consumer goods that we need in return, go by ship. Ships that can sink. Ships that in the last two years alone have been blocked at the Suez Canal, by scarcity and by the outbreak of COVID among their crews.

During World War II, more than three million tonnes of US merchant shipping was sunk. Nearly 30 000 British sailors were lost. Thirty allied merchant ships were sunk in Australian waters, 19 of these off the coast of New South Wales. And while that war was fought by brave men and women in the field, with countless millions of civilians dying in the crossfire, it was won and lost on the basis of resources and production. The Allies had more of both.

According to the Reserve Bank of Australia, the Australian economy currently relies on mining (11.5% of GDP), mostly for export, and health and education (13.2%). How much will it suffer if material and people cannot move in or out? History tells us: ‘The outbreak of war in August 1914 was disastrous for the Australian economy. Export industries were hit by the closing of markets and disruption of shipping, capital inflow slowed sharply, and vital imports were cut off’. (bit.ly/3IN2jjO)

Nearly a decade ago, Geoscience Australia conducted a review of strategic minerals. Its 2013 report was entitled ‘Critical commodities for a high-tech world: Australia’s potential to supply global demand’. In September 2021, the Morrison Government announced that it will (at some point) establish a $2 billion loan facility for Australian critical minerals projects ‘… to help secure the vital supplies of resources needed to drive the new energy economy and support the resources jobs of the future’. NSW followed in November, announcing its intent to (at some point) establish a Critical Minerals Hub in the Central West, to support projects such as the $1.3 billion Dubbo Zirconium Mine project. Every single one of these initiatives is focused on trade.

Our federal and state governments talk. They announce. They engage in discussions such as the Quadrilateral Security Dialogue ‘to develop a strategy to secure supply chains’. The world needs strategic minerals, they say. We have them. So they set up the Critical Minerals Facilitation Office to ‘connect Australian critical minerals projects to investors and strategic partners to advance projects and provide midstream and downstream opportunities’.

But all of that does Australia precisely no good if we are just putting slightly more valuable dirt in boats and waiting for finished goods to come back to us. Rearranging the deck chairs didn’t save the Titanic, which, if the analogy isn’t obvious enough, sank.

Just 6.0% of our GDP comes from manufacturing. Cut off from the world, if we make nothing, then we will have nothing. No way to survive. Nothing to defend ourselves with but comparatively expensive rocks.

Our strategies need to urgently evolve. Instead of focusing on strategic minerals, we need to be expanding to strategic production.

I wrote an article in 2020 (September-November issue, p. 20), noting that Australia’s supply of the critical chemicals needed to maintain our clean drinking water supplies have, in some cases, recently been increased from two to four weeks. The COVID crisis has left both our society and our very limited manufacturing short on all sorts of supplies. Critical to a country of our size, we are at the time of writing in desperate need of AdBlue (an additive to diesel), putting our entire transport supply chain at risk.

But we need our own strategic products. That is – all the chemicals, components (such as semiconductors) and ultimately the finished goods that make our society function. Even if we don’t go to war, our inability to supply ourselves leaves us desperately vulnerable. We’ve seen it multiple times just in the last two years: after the Ever Given blocked the Suez; throughout COVID; and – importantly – when other countries diverted our supplies of vaccine ‘because they needed them more’.

Somehow we haven’t learned that lesson. When World War I broke out, we were fortunate that our troubled attempts to establish a steel industry gave us a single small smelter (at Lithgow). The Newcastle steelworks wasn’t established until 1915. Port Kembla came in 1928, just in time for the Great Depression, and the Australian steel industry was barely saved by surging prices in 1937, just before the next global conflict broke out. Both times, Australia ended up with the production capacity base at the needed times. But both times, we just got lucky. Meanwhile, our steel production has halved in the last 20 years, while the value of iron ore exports has doubled in the last 10 years alone.

My late father told me a story about growing up poor in Malta in the 1930s. ‘We used to collect all the scrap iron we could find for extra money. Sold it to the Germans. And then the bastards dropped it all right back on us.’

Just like us, Malta was an island that relied almost exclusively on maritime trade for its supply. Few people will know that the Luftwaffe dropped a greater tonnage of bombs on that tiny island in 1942 alone than it did on all of Britain in all of the Blitz. The total tonnage was four times more than everything the Allies dropped in the infamous attack on Dresden. Malta was the most bombed place on Earth. It was cut off and desperate. By August 1942, the fortnightly ration per adult was 400 grams of sugar, 200 grams of fat, 300 grams of bread and 400 grams of corned beef.

With supplies at critical levels, the people of Malta were within two weeks of surrender when the famous convoy of Operation Pedestal broke through. It’s an incredible story of bravery that is worth reading about, but it involved terrible sacrifice and fewer than half of the civilian merchant ships in that convoy reached the island.

Our planning for the future can’t rely on bravery. It can’t rely on endurance or luck. It can’t rely on the intervention of allies. And it can’t rely just on resources. Our wealth of mineral resources is just half of the equation for our strategic success. If we want to remain a country ‘one and free’, we need to be uniting in the urgent creation of a new manufacturing base. The future we don’t prepare for is one that we’re not going to like at all. 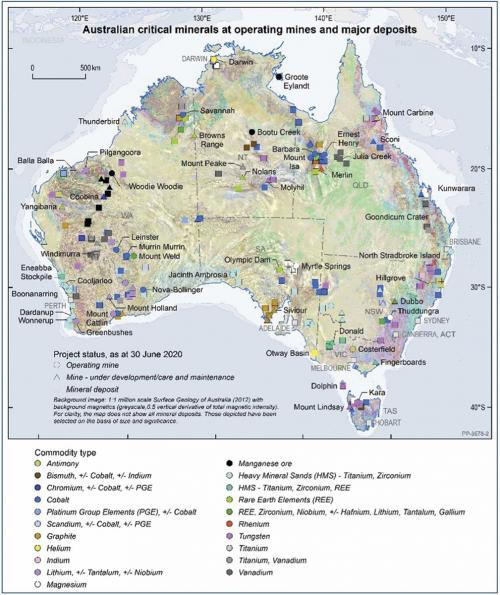 Our strategies need to urgently evolve. Instead of focusing on strategic minerals, we need to be expanding to strategic production.