A study published in the Archives of Environmental Contamination and Toxicology (doi: 10.1007/s00244-015-0227-7) has found that a chemical widely used in personal care products such as sunscreen poses an ecological threat to corals and coral reefs and threatens their existence.

The study came after the US National Oceanographic and Atmospheric Administration (NOAA) declared the third ever global coral bleaching event and warned that locally produced threats to coral, such as pollution, stress the health of corals and decrease the likelihood that they will resist bleaching, or recover from it.

Toxicopathological effects of the sunscreen UV filter oxybenzone on coral planulae (baby coral) demonstrates that exposure of planulae to oxybenzone produces gross morphological deformities, damages their DNA and, most alarmingly, acts as an endocrine disruptor. The last causes the coral to encase itself in its own skeleton, leading to death.

These effects were observed as low as 62 parts per trillion, the equivalent to a drop of water in six and a half Olympic-sized swimming pools. Measurements of oxybenzone in seawater within coral reefs in Hawaii and the US Virgin Islands found concentrations ranging from 800 parts per trillion to 1.4 parts per million. This is over 12 times higher than the concentrations necessary to impact on coral.

Marine scientists from Israel and the US undertook the study. Lead author Dr Craig Downs of Haereticus Environmental Laboratory Virginia said, ‘The use of oxybenzone-containing products needs to be seriously deliberated in islands and areas where coral reef conservation is a critical issue. We have lost at least 80% of the coral reefs in the Caribbean. Any small effort to reduce oxybenzone pollution could mean that a coral reef survives a long, hot summer, or that a degraded area recovers. Everyone wants to build coral nurseries for reef restoration, but this will achieve little if the factors that originally killed off the reef remain or intensify in the environment.’

The study found that oxybenzone is a photo-toxicant with adverse impacts exacerbated in light but even in darkness, planulae were transformed from a motile (mobile) state to a deformed, sessile (immobile) condition and exhibited an increasing rate of coral bleaching in response to increasing concentrations of oxybenzone. This is particularly relevant for areas facing mass bleaching events, including Hawaii.

Between 6000 and 14 000 tonnes of sunscreen lotion are emitted into coral reef areas each year, much of which contains 1–10% oxybenzone. The authors estimate that this puts at least 10% of global reefs at risk of high exposure, based on reef distribution in coastal tourist areas.

This study is one of fewer than two-dozen scientific studies that closely examine the impact of personal care product ingredients on marine organisms and habitats. According to MarineSafe, a campaign concerned with the impact of these products on ocean health, there may be as many as 82 000 chemicals polluting our marine environments, just from personal care use.

Since the 1970s, coral reefs have been devastated on a global scale. Regional weather and climate events are often the cause of wide-scale mortality but the long-term causative processes of sustained demise are often locality specific and increasingly thought to be linked to pollution.

Oxybenzone is found in a range of products from lipstick and mascara to sunscreen and shampoo, it acts as a barrier to UV light, a task for which other ingredients are available. It has already been identified as a threat to human health. The European Union’s International Chemical Secretariat has listed oxybenzone on its ‘Substitute it Now’ list of substances that should be replaced and meets the criteria for ‘Substances of Very High Concern’. 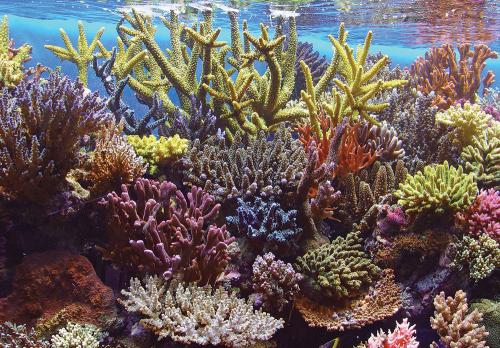 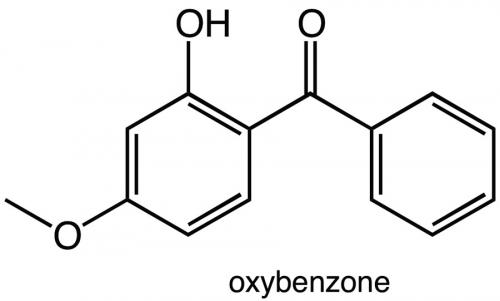