Chemistry on show: an online ‘top 10’

Online demonstrations are a safe and time-saving teaching option. Jeff Hughes presents some of his favourites.

Chemistry is a very visual science, and its teaching – and enjoyment – can be greatly enhanced by demonstration. A pioneer in classroom demonstrations was E.W. Hartung, who was Professor of Physical Chemistry at the University of Melbourne in the 1950s. He had the Masson Theatre specially designed with a space for his huge lantern projector, with a stage to perform experiments that could be projected. He had not only the right apparatus but also laboratory assistants to prepare his demonstrations. Teaching time, space and OHS regulations limit what teachers can practically do. Today we only dream of Masson’s facilities, but we can still spice up our lectures with online videos, largely from YouTube. Many of the demonstrations shown would be difficult or dangerous for teachers to set up, but we can still see what happens when someone is brave (or foolish) enough to try it or has access to the necessary resources. The prince of sites for chemistry videos is the Periodic Table of Videos (www.periodicvideos.com), set up by Sir Martyn Poliakoff, Research Professor of Chemistry at the University of Nottingham. Each element has a video, with demonstrations and a talk by Martyn. The following ‘top 10’ are from a collection of my favourite videos that I have used in classes or talks to students. They show some very interesting chemistry and are fun to see (although not always safe to do).

James Dewar was the first to liquefy hydrogen, at about 20°C. He used a ‘cascade’ experimental construction and the Joule–Thompson effect. A gas under high pressure, when escaping from a narrow orifice, cools rapidly and this cooling can be used to liquefy a gas with a lower boiling point. A ‘cascade’ of gases, each with lower boiling points than the gas above in the cascade, can lower temperatures sufficiently to liquefy the permanent gases. James Dewar and Heike Kamerlingh Onnes raced each other to be the first to liquefy the last of the gases not yet liquefied. Onnes beat Dewar, mainly because Dewar did not have enough helium. Because of his disagreeable personality, Dewar had problems getting other researchers to supply him.

Helium does not liquefy till about 5 K, but if it is cooled further a new state is achieved. When helium is cooled below 2.18 K, a 'superfluid' state of helium, called helium II, is formed, and its properties are very odd indeed. This video demonstrates these properties.

If the cooling is continued further, to within a few nanokelvin degrees above absolute zero, a new state is entered where things become even more weird. Atoms settle into their lowest quantum state, and their wavefunctions merge into a ‘super atom’. Although we can’t see the actual condensates, this video nicely explains what they are and how they behave.

Three-dimensional successive snap shots in time in which rubidium atoms cooled to less than 170 billionths of a degree above absolute zero condensed from less dense red, yellow and green areas into very dense blue to white areas – a ‘superatom’ behaving as a single entity.

We move from a substance that can only be created with great difficulty in a research lab to one we can get off the supermarket shelves. Cornflour is a thixotropic substance, exhibiting non-Newtonian flow. A thixotropic substance behaves differently depending on the stress applied to it. The Mythbusters demonstrate this type of behaviour by ‘walking on water’.

In other videos, the Mythbusters fill a swimming pool with cornflour slurry (bit.ly/1V53nRu) and put it on speaker cones (bit.ly/1OJSZJN).

This very unusual substance has become quite a hit on YouTube. It can be made as shown at bit.ly/1ZojRqn. Further methods of preparing it and demonstrations are at bit.ly/1Tgi1nE.

Macro photograph of ferrofluid influenced by a magnet.

This demonstration has been around for some time but this is a special version, a twist on the ‘domino’ effect. Some people have way too much time on their hands! It is another example of an experiment with ingredients you can get from a supermarket shelf but should be done outdoors. It’s not dangerous but very messy! Apparently the effect differs according to the country in which you purchase your soft drink (ingredient amounts vary).

Chemistry is getting a wider exposure through demonstrations such as this one from the Jimmy Fallon show. We have seen it in Australia on the ABC with Dr Karl and Adam Spencer in ‘Sleek Geeks’. This demonstration is of a really heavy gas. We all know what happens to the voice when helium is breathed (the lightest gas), but what happens when we breathe a heavy gas like sulfur hexafluoride?

Why ‘barking’? Watch the video and see! This is another clip from a TV science presenter. This demonstration has quite a history. German chemist Justus von Liebig performed it for the Bavarian royal family in 1853. The glass tube exploded and the Queen was wounded in the cheek. Liebig was saved from possible death by his snuff box. Without the box, a shard of glass might have penetrated one of his arteries.

The chemiluminescence is caused by a reaction between nitric oxide and carbon disulfide. Apparently explosions can happen if nitrogen dioxide is present, and this may be what happened in Liebig’s experiment. This can be prevented by having some water in the bottom of the tube.

Before the invention of camera flashes, the ‘barking dog’ reaction was often used as an illuminator in photography.

This demonstration is always a great hit when I show it in class. In my younger days it was a common prank to prepare a solution of nitrogen triiodide, pour it on the floor and let the solvent evaporate. Then if any unsuspecting person (e.g. a teacher) walked on the floor, there would be mini explosions as the touch powder was set off. How sensitive it is to impact can be seen from the demonstration. It is not recommended you try this demonstration.

Can liquids flow uphill? Yes, if confined to a narrow capillary tube. However, the ‘polyox’ polymer (poly(ethylene oxide)) can show capillary flow just by pouring it from one beaker to another. The demonstration not only displays the uphill flow, but gives a nice explanation of how it works.

It seems appropriate to finish my top 10 with a Poliakoff demonstration. This one is actually set up in his office – it beats most desktop toys! He uses it to screen potential research students. If they show no interest in his demonstration, he gets them to look elsewhere.

Also worth a look

With any top 10, there are always some near misses. Elephant’s toothpaste (bit.ly/1SOVkZN), the thermite reaction (bit.ly/2011mZm) and gun cotton (bit.ly/1PkCAAo) are all worth a look. It’s so much easier to blow things up on video! 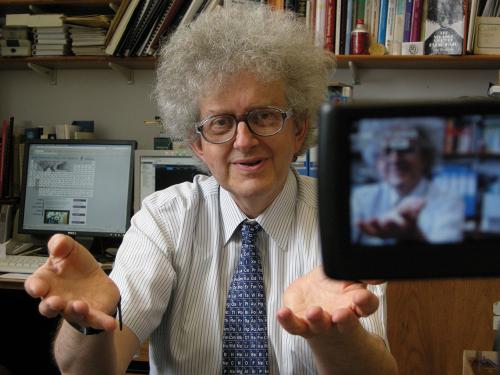 A research professor at the University of Nottingham, Martyn Poliakoff is also a pioneer in green chemistry.