The explosion energy of any bomb is conventionally expressed as the ‘TNT equivalence’. Non-SI units (tons not tonnes) continue to be used to express TNT equivalence. The bomb at Hiroshima was 15 kilotons and that at Nagasaki was 20 kilotons.

The term ‘nuclear missile’ is frequently used synonymously with ‘nuclear weapon’. Missiles for nuclear warheads use conventional propellants, and a particular missile might be suitable for use with conventional or nuclear weapons. Some missiles can hold more than one warhead. I am aware of only one example of a ‘nuclear missile’ where the missile propulsion uses a nuclear fuel. That is the Russian 9M730 Burevestnik cruise missile, which uses a nuclear thermal rocket for propulsion.

A strategic nuclear weapon is intended to impact a location distant from its launch, for which either a long-range missile or a gravity drop is needed. A tactical nuclear weapon is for ‘battlefield’ use. Advances in nuclear weapons are often not in the nuclear part per se but in the missiles. Once a missile suitable for a particular application is available, it might be straightforward to select an existing nuclear warhead for use with it. A nuclear weapon is said to be deployed if it is in position and ready for use, in contrast to being stockpiled.

The current Russian nuclear arsenal includes the SS-27 Mod 1, also called the RS-12M (Topol-M), the latest in a succession of Topol intercontinental ballistic missiles (ICBM) dating from the 1980s. In one form, the RS-12M is supported in a silo for ground launching and in the other form it is supported on a transport erector launcher (the ‘mobile type’). Each version of the Topol-M carries a single nuclear warhead of 800 kilotons TNT equivalence. An article in the Bulletin of the Atomic Scientists this year (bit.ly/3L0maNW) states that 60 of the silo type and 18 of the mobile type are in deployed status. The missile uses a solid propellant, and the range is 11 000 kilometres. The warhead was developed by the Russian Federal Nuclear Centre in Sarov, a ‘closed town’ about 400 kilometres from Moscow.

Also in the ICBM category is the SS-X-29, otherwise known as the RS-28 (Sarmat) nuclear missile, expected to be in deployed status by the end of 2022. It will be capable of carrying ten nuclear warheads each of TNT equivalence 500 kilotons, or a larger number of smaller ones. The warheads can be independently directed. It will be silo launched and will use a liquid propellant. The missile range is 10 000 kilometres.

The TNT equivalences of the warheads used with the RS-28 (Sarmat) nuclear missile suggest (with the information accessible it cannot be put more strongly than that) that they use boosted fission. Neutrons obtained in a fusion reaction are supplied to a fission reaction to ‘boost’ it. This featured in some of the US atomic tests in Nevada in the 1950s. There was no such boost in Little Boy or Fat Man.

According to the Bulletin of the Atomic Scientists article, Russia has air-launched cruise missiles, including the Kh-55 (aka AS-15). This has a range of 2500 kilometres and uses conventional jet fuel for propulsion. It carries a 200-kiloton nuclear warhead. The Tupolev-160 aircraft can carry up to 12 such missiles. Russia also has, in deployed status, submarine-launched ballistic missiles with nuclear warheads, including the SS-N-32 (aka R-28RMU) missile. This has a range of 8300 kilometres and can carry six 100-kiloton warheads, which one expects would be fission only. It is intended for use with the Delta IV class submarine, which itself uses nuclear power. The UK uses nuclear-powered Vanguard submarines with Trident nuclear missiles. That is the total nuclear deterrent capability of the UK at present. In September 2021, Australia undertook to acquire nuclear-powered submarines under AUKUS, the trilateral security pact between Australia, the UK and the US. Missiles carried by these submarines will carry conventional, not nuclear, weapons.

All of the Russian nuclear weapons discussed here have been in the strategic category, but Russia does have a significant complement of deployed tactical nuclear weapons. Tactical weapons are sometimes (as in the Bulletin of the Atomic Scientists article) described as ‘non-strategic and defence weapons’. The Russian Iskander-M short-range ballistic missile, which has already proved its worth with conventional weapons, can also be used with nuclear warheads of TNT equivalence up to about 100 kilotons. It has a range of up to 480 kilometres, and a point that naturally arises in one’s mind is that the distance from the Russian border with Ukraine to Kiev is shorter (about 385 kilometres).

Since President Eisenhower’s ‘Atoms for Peace’ plans from about 70 years ago, enormous amounts of electricity have been generated by nuclear fuels, although that is in decline. Nuclear fuels have found limited application in naval vessels but not in passenger ships. Nuclear weapons have retained their importance, even though it is 77 years since one was used in warfare.

Clifford Jones FRACI CChem is the author of The application of nuclear science to space (2022), An overview of nuclear weapons (2021), Nuclear powered ships and submarines (2021) and Nuclear powered generation of electricity – a world evaluation (2020). 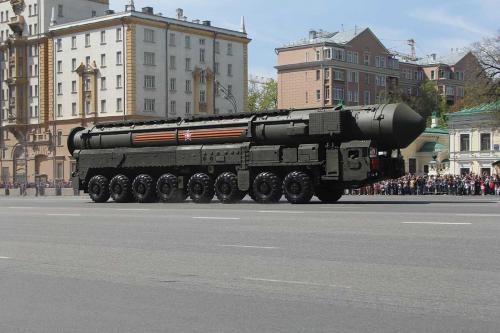