On Earth Day, 22 April, chemists across Australia and the world joined a global movement celebrating science by engaging with other scientists and the general public in meet-ups, marches, public talks and festivities. I was in Brisbane that day, having just visited a collaborator at the University of Queensland the day before, and therefore joined the activities in the River City. Across all of Australia, thousands of scientists and researchers from all disciplines and their friends, kids, relatives and other supporters came together. But what were we trying to support? The March for Science international website (marchforscience.com) says:

The March for Science champions robustly funded and publicly communicated science as a pillar of human freedom and prosperity. We unite as a diverse, nonpartisan group to call for science that upholds the common good and for political leaders and policy makers to enact evidence based policies in the public interest. The March for Science is a celebration of science.

While influential voices globally (such as Nature, Science and the American Chemical Society) and locally (including the Sydney Morning Herald and Nobel Laureate Peter Doherty) expressed strong support for this movement, others expressed concerns. A prominent example in Australia is the Australian Academy of Science, which was called ‘spineless’ by Professor Simon Chapman for not endorsing the March for Science (Sydney Morning Herald, 17 April 2017).

During discussions with colleagues, friends and attendees before, during and after the event, two concerns kept coming up. One was the notion that ‘Scientists should not march; they should not be involved in politics’. But science and chemistry – and indeed the pursuit of knowledge and understanding in general – does not happen in a vacuum. If we want these to help shape our world and the direction we are moving in, then we must engage with the broader community. Dispassionate presentation of discoveries and facts only marginally informs and influences behaviour. Instead, norms, values and narratives are what drive decisions, both for individuals and for communities. These are areas that have been called ‘blind spots’ for scientists (Nature 2017, vol. 543, p. 623) and are something we as a community should work to improve on. Something like the March for Science is only a small part towards increasing broad engagement with the general public, but it is a step in the right direction that also complements emerging concepts in the scientific community towards open and transparent science, as we have recently discussed (J. Am. Chem. Soc. 2016, vol. 138, p. 13 449).

The second concern centred on ‘What difference is this going to make?’, which can be difficult to answer. Reporting from marches all over the world showed people of all ages and backgrounds enjoying themselves and having a great time with some funny signs and outfits. But after the event very few immediate effects or changes were obvious, which can then raise the question ‘What was the point?’. Here it is important to remember that the key idea is to show, share and spread passion about science, that it is valuable and worthy of support, and to raise awareness of the challenges that the scientific endeavour is facing. A march is only one of many ways to do this, and many supporters have helped – and continue to help – by spreading these messages through TV, radio, newspapers, social media, and just by talking with colleagues and friends. Having the support of a global movement helps provide weight and momentum to these efforts.

To effect change is never easy and requires sustained efforts. At its core it is about trying to share what we as chemists and scientists are passionate about, what we value, and why we think chemistry and science are important for our future.

Dr Mattias Björnmalm is at the ARC Centre of Excellence in Convergent Bio–Nano Science and Technology, and the Department of Chemical and Biomolecular Engineering, the University of Melbourne. 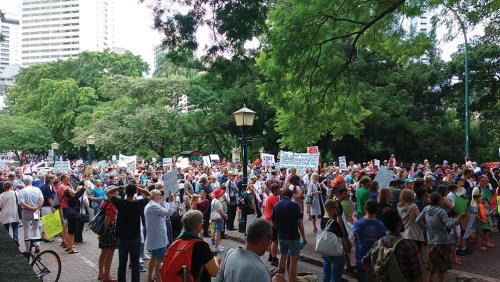 March for Science in Brisbane.