Today we are constantly assailed with statements about our being in a state of transition away from fossil fuels and that soon the transport fuels, which have delivered us prosperity for the past 100 years, will be replaced with alternatives. This, we are assured, will lead us to a bright, new and cleaner future. In particular, we are told that electric vehicles and possibly hydrogen vehicles will take over from fossil fuel-powered vehicles. Unlike revolutions of previous ages, this revolution is being driven by the ambitions of our leaders in government rather than from the consumer perspective.

Fossil-fuel-based transport took over from mainly horse-drawn vehicles in the late 19th century. Looking back, an alternative to horse-drawn vehicles was becoming a necessity if large cities such as London or Paris were to prosper. The geographic size of these two metropolises was reaching the limit of the transport system (horse) to deliver fuel (straw, oats etc.) from outside the city limits to the centre and remove waste (horse manure) back to rural areas. From this perspective, the internal combustion engine allowed for the growth and expansion of mega cities, which could not occur if horse-drawn vehicles were the only mode of transport.

We must remember that the replacement of horse-drawn vehicles with the internal combustion engine was not sudden. Total replacement took decades and horse-drawn transport lingered on in many industries well into the second half of the 20th century. I can remember milk being delivered by horse-drawn cart – an early example of a fully autonomous driving vehicle. The horse (usually a Clydesdale called Dobbin) would learn the route and pull the cart at a sufficiently low speed to allow the milkman to make his deliveries and return with the empties without the cart stopping once. When Dobbin was replaced by electric milk floats, the milkman had to work harder because he had to keep stopping. Furthermore, ponies were often used in mines, particularly coal mines, to haul coal from the working coal face to coal hoists or to the surface. In many cases, the ponies spent their entire lives underground. The use of ponies in collieries dates from the UK Mines Act of 1842 which banned the use of women and children in underground operations. Women and children could of course be used on surface operations.

We are told that within 30 years the use of internal combustion engines operating on fossil fuels will cease, with some jurisdictions moving to ban their sale. So what will be the impact of replacing fossil-fuel vehicles on a city from the perspective of goods movement and transport logistics? The graph is an attempt to answer this question.

Lithium-ion batteries have a volumetric energy density even lower at less than 5 MJ/L. Note this is the idealised density and represents a limit for this technology, with the current commercial batteries being lower than this.

For a more realistic assessment of the relative efficacy of fuels, we need to consider other factors, such as the weight of the container vessel (tank). For cars, this varies from about 10 kg (60 L) for fossil fuels, to about 140 kg for a hydrogen tank at 70 MPa pressure, carrying about 5 kg of hydrogen, to 540 kg for a lithium-ion battery (Tesla Model S).

On the benefit side for alternative fuels is the higher efficiency of the motive power being delivered. Modern petrol engines are between 25% and 30% efficient; diesel engines are somewhat higher at about 35%. Hydrogen fuel cells have approximately 60% efficiency and battery technology could deliver 90% efficiency.

The data in the table gives some pertinent pointers. This data has been assembled from relatively available sources so is approximate. It is presented to give a broad outline of issues to be considered in determining the relative merits of the transport fuel options.

The horse is assumed to be a workhorse weighing 600 kg and requiring 100 MJ/day of energy. This is provided as oats in a bag. The power output (1 horsepower, 0.75 kW) is optimistic, as is the efficiency at which the oats can be turned into motive power.

Three examples of internal combustion engines are a small petrol car (e.g. Ford Fiesta), a large diesel (e.g. Toyota Land Cruiser) and a truck (e.g. Kenworth). Maximum power data is taken from various company sales brochures and websites. The data for the hydrogen fuel cell vehicle is taken from Toyota Mirai sales literature and the data for the lithium battery case is for a Tesla S, as reported by Wikipedia.

The following columns in the table give fuel volumetric energy data and a lower estimate taking into account the mass of the container. The efficiencies of the engines may be on the high side.

As can be seen, the power (rate of doing work) for the battery vehicle is very high. This underpins the enthusiasm of many for this type of vehicle – it’s very fast. However, the data indicates that as far as the energy carried in the vehicle, hydrogen fuel cells and lithium-ion batteries are broadly the same but are well below those of conventional fossil fuels. In fact, they are very similar to that of a horse. Full power cannot be applied for long (final column).

A further point of distinction is the time to bring the vehicles back to a fully charged state. We know that fuel refilling for liquid fossil fuels is less than five minutes and is not much more for LPG vehicles, which would imply that hydrogen refuelling would be similar (Toyota claims five minutes). However, battery recharging times are much longer – 10 hours for a Tesla S or one hour on a fast charger.

It is energy in any form that moves people and goods across an urban network. An immediate deduction from this is that for a non-fossil-fuel transport fleet, for the same amount of goods to be carried, there will have to be many more transport vehicles on the road. The data also emphasises the superior performance of fossil fuels for towing large loads (caravans etc.) over long distances. This duty seems well out of reach for the alternative fuel vehicles.

As more and more players adopt the target of zero carbon emissions by 2050, it is important to think about the implications of this objective and try to identify and mitigate any unintended consequences from the adoption of alternative fuels:

If we are to fully embrace alternative fuels and place barriers to the purchase and use of conventional vehicles, then these and other questions need to be addressed. 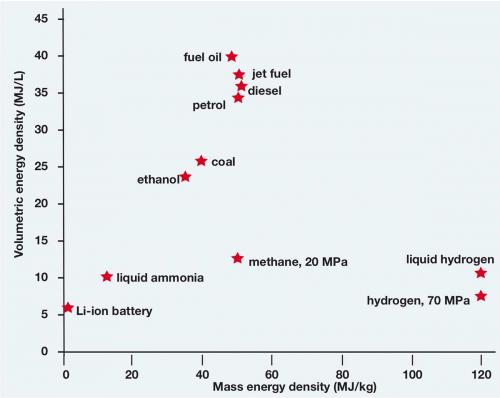